Back to Profile Gallery > Guspro 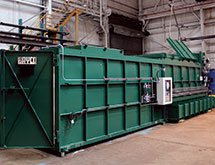 Cleaning industrial equipment such as the hooks, racks and fixtures used on painting lines can be environmentally challenging if solvents or blasting pellets are used to clean them. But another option is to burn off the hydrocarbon-based coatings using a process called controlled pyrolysis. The resulting emissions are mainly carbon dioxide and water, and the waste product is an ash that requires no special disposal.

Guspro’s Bayco division manufactures a line of heat-cleaning ovens that are produced for automotive rebuilders, who bake off grease and other hydrocarbons from engine blocks and cylinders; electric motor rebuilders, who strip the insulation off used motors before winding new copper wire on them; and in cleaning scrap and recycled metals such as aluminum.

“There’s a lot of different applications,” Vice President Brian Sunnen reports. “We hear about more and more. Specialty customers have been a growth market for us.”

The heat-cleaning ovens have two chambers. The object to be cleaned is placed in the first chamber and heated to 600 to 800 F, depending on the application. In the absence of oxygen, the hydrocarbons on the surface decompose, and the resulting fumes are then directed into a second chamber. This oxidizer chamber is oxygen-rich and heated to between 1,400 and 1,600 F, where combustion converts the hydrocarbons into harmless carbon dioxide and water.

Oven sizes start at 2-foot cubes but can grow to almost any custom size. The company is currently building one with an inside dimension that is more than 34 feet long. “We have 18 standard models, but 50 percent of what we do are custom sizes or have other special requirements,” Sunnen estimates. “Even the standard models often have options associated with them that don’t dictate an assembly-line type of production model. Every order tends to be slightly different. That’s where our enterprise software really helps with the scheduling and procurement.”

“Between our four divisions, we have our database of over 40,000 parts,” Operations Manager Paul Pecoraro calculates. “Twenty thousand of those are active parts.”

He explains that Guspro works on up to 1,500 different work orders at any given time and schedules up to 2,000 operations every three months. That schedule is modified on a daily basis.

Manufacturing efficiency received a sizable boost two years ago when the company relocated to an existing factory building with a 15-ton crane in an 80-foot by 200-foot crane bay with a 40-foot ceiling. Guspro had been in its previous factory for nearly 50 years.

“It was a five-story building with a 100-year-old elevator,” Pecoraro recalls. “It was an extreme nightmare to try to schedule and get production completed. You had restrictions from the size of the elevator.”

“The move gave us a lot of flexibility, and since the move, we’ve pushed about 40 percent more manufactured product through what ultimately is a smaller space,” Sunnen points out. “The old facility was about 80,000 square feet. We’re only using 75,000 square feet of the 100,000 square feet right now.”

Very little is outsourced in Guspro’s manufacturing processes. For its ovens, raw material is cut in-house, then welded into sections, painted in a new 52-foot booth and sent to final assembly, where the refractory material is poured on the floor like concrete and takes one to two days to harden and cure. Then the electrical control panels, wiring and other components to drive the system are installed.

Cleaning ovens are not kept in stock except for use at conventions or for demonstration. Depending on their size, the ovens can take from six to 18 weeks to deliver from the time they are ordered. Once an oven is ordered, Guspro assists with any regulatory clearances from the state or province in which the oven will be located for the customer while the oven is being manufactured. In most cases, such permitting can require several months.

Guspro has a service department that can repair and refurbish its heat-cleaning ovens, some of which have been running with proper care and maintenance for 40 years, Sunnen maintains.

“We had to figure out ways to work smarter and more efficiently on a day-to-day basis to be more profitable,” Pecoraro remembers.

“We had to adapt a lot and change to survive,” Sunnen adds. “You can’t do any of that without your employees. We’re very fortunate to have had a lot of skilled people over those 82 years and have a fantastic crew here at Guspro today.”