Back to Profile Gallery > Gutterglove 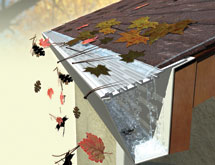 It is no secret that necessity is the mother of invention, and Gutterglove President and CEO Robert Lenney’s experience with gutters had him convinced that a better gutter guard was a necessity. After having cleaned enough rain gutters to see what he believed was the poor performance of gutter guards on the market, he sought to improve the technology and create a gutter guard system that would be more durable and effective.

Major components of the product lines’ success are design, construction and flexibility. Gutterglove Pro, Gutterglove Ultra and Gutterglove IceBreaker each includes a perforated aluminum channel and type-316 stainless steel micro-mesh. The mesh is glued into grooves on both sides of a 5-foot extruded aluminum channel section, which is anodized to protect it from the environment and make it adaptable to copper gutters. Gutter­glove Gutter Protection systems can be installed onto any existing gutter, and the IceBreaker version includes a single heat cable that melts snow and ice to prevent the formation of icicles and ice dams.

As for the LeafBlaster Gutter Protection System, it is made up of three main components: a front anodized aluminum drip edge, a type-316 stainless steel V-bend filter mesh and a water syphon control strip under the mesh. It is adaptable to several different kinds of gutter systems and roofs.

“When we think about product development and improvement, we look at the market and ask what is missing,” Lenney says. “We then make a product that will fit that market segment. When we first came out with Gutterglove, it was primarily something that needed to be professionally installed. But not everyone wants to spend the money on that, so we’ve come up with options that appeal to the do-it-yourselfers. We have high-end and low-end products, and we have products that fit the consumers’ geography and budget. The four primary systems we have provide a system for every market group.”

Gutterglove is also used as the first-stage filter for rainwater harvesting systems because the steel micro-mesh filter deflects leaves, pine needles and fine roof sand grit. This means debris-free water can be captured and stored for future use. This product application, along with its strength and durability, made Gutterglove attractive to the U.S. military, which is using Gutterglove products on green building renovations across the country.

Over the years, Gutterglove has gone to great lengths to build its brand identity and market presence. One of the most effective methods was a half-hour infomercial. The program has been broadcast on television and is available on DVD so Gutterglove dealers and contractors can use it to promote the system to homeowners.

Another important driver of Gutterglove’s expanding reach has been its dealer and contractor network. Over the last few years as the company expanded its product portfolio, it also revamped the process of how a contractor can become a Gutterglove dealer, making the arrangement more flexible. At the end of 2011, the company had close to 400 dealers, and Lenney is optimistic that the company can double that figure by the end of 2012.

“When we got started back in 2003, we knew we could build quality products, but we didn’t know much about marketing,” Lenney says. “Even though we had the best product on the market, the challenge is to sell it. We started in Northern California and then looked to expand around the country by advertising, attending national tradeshows and developing our website. Devising lower-cost product options and expanding the Gutterglove dealer network has helped fuel our growth.”

Like many American manufacturers, Gutterglove several years ago found that outsourcing manufacturing and assembly to China was the best way to compete. That was because the company uses parts from high-end, high-quality materials, which were very expensive to make in 2006 when the company offshored manufacturing. But things have changed, and the company recently announced plans to bring its gutter guard manufacturing from China back to California by the end of 2012’s second quarter.

One key reason for the move was the fact that the Army Corps of Engineers started to look at Gutterglove for installation on American military bases. Because of the 1933 Buy American Act, it meant Gutterglove products had to be made in the United States. But Gutterglove also believes the move will bring money back to California and create new jobs, while also setting an example for other manufacturers.

“The prices on parts were only slightly more than in China, and we knew streamlining our assembly process could bridge that cost gap,” Lenney says. “A small percentage increase we can live with. Hopefully, that sends a message to others that everything isn’t always about profit. Providing jobs and economic opportunity is also important.”

Gutterglove also is investing in organizational efficiencies. It currently utilizes manually operated assembly machines, but at some point the company would like to move to a semi-automated assembly system. Over time, the company will improve its assembly processes while keeping manufacturing in the United States, Lenney predicts.

For almost a decade, Gutterglove has gone about revolutionizing the gutter guard market. The effectiveness of its products has been proven time and again, and it continues to look for ways to build on its success. Lenney says it is people who will carry that success forward.

“This a great company that is run with a family feel,” he says. “We need to make sure we continue finding the right employees and managers so we have top-notch managers in all the right departments who are people our employees can look up to.”