There are legitimate reasons for Hansen Industrial Transmissions (HIT) to be jubilant at the start of 2018. The Belgian-based gearbox manufacturer celebrates its 95th anniversary this year 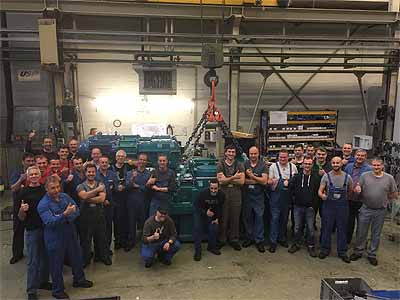 and looks poised for another successful 12 months after finishing 2017 on a high. For the first time since HIT was acquired by Japanese manufacturer Sumitomo Heavy Industries in 2011, the company made a profit as a standalone factory, a proud moment for the firm as General Manager – plant Belgium, Eric Goos tells us.

The good news does not stop here as Eric reveals a big announcement that will have a profound impact on the company in the future; “On 4th January 2018 we opened our global R&D centre here in our Edegem facility. It is the first time since our acquisition in 2011 that Sumitomo has invested in an R&D centre outside of Japan.”

“All the gearboxes are applicant-based and up to 25 per cent of our business covers wet cooling tower business and dry cooling tower business. We cover several other applications like mixer applications, toasters, screw pumps, single stage pumps, drive conveyors, and even downhill conveyors. The industry sectors we manufacture for include energy, food and beverage, packaging, material handling, you name it,” he continues.

Eric moves on to tell the story of HIT being acquired by Sumitomo in 2011; “In fact, we already had a joint venture with Sumitomo in 1976, up until almost the early 90s, when it sold Hansen products under a Licence Agreement the companies had signed. Later on, Sumitomo looked to bring the two together and develop what we had already started in the 80s and 90s.”

HIT and Sumitomo blended well together, as the latter benefited from HIT’s strong reputation in Europe. “Sumitomo has gained a dominant role in the Asian and the American markets while we have a larger footprint in Europe, so bringing the two together earned Sumitomo a better position in this part of the world,” Eric adds.

“The dividing of the two created an imbalance in manpower, as well as in allocation of assets and resources. As a result, the profitability was not as it should be,” Eric remembers. “From the first day of our acquisition we had the ambition to set ourselves the task of becoming profitable and this happened last year,” he concludes, rounding off the story of the growth HIT experienced as part of Sumitomo.

Eric attributes the company’s successful period to a number of reasons; “I think cost control in all aspects is key. It is not that our equipment is brand new. In fact, the average age of our machines is between six and 20 years. We are just trying to maintain them as long as possible, and at the same time we are looking to adopt new methods every day that will optimise the working process.” He also emphasises the fact that upon acquisition HIT did not have to change all of its established processes. “We just turned what we do into a more transparent and leaner process,” he comments. “Continuous improvement is a key factor, and we always seek ideas from everyone that we can, then work out a valid solution. We are never satisfied with a status quo!” 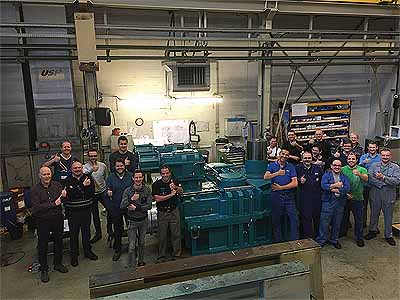 The establishment of the new R&D centre at the Hansen facility will occupy the thoughts of Eric and his colleagues throughout 2018; “We are now preparing ourselves to welcome the people who will come from other countries to work here. We already have Japanese employees but we are still waiting for the Americans and the Chinese to join us so it will be a complete international team.”

He also outlines the other objectives the company is looking to meet this year; “The top priority remains customer satisfaction, of course. We also want to shorten lead times as we have noticed they were growing in 2017.” It appears that 2018 will be busy for HIT, but Eric is optimistic about the company’s future; “I think we are a strong partner for customers because we co-create with them and think alongside them. We do not say that we have a standard solution to everything. What we say is, that we always have an engineer-to-order solution. As long as we stay this way, the company will have a bright future.”