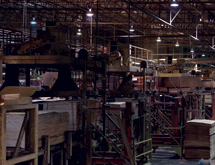 Emmanouel Piliaris, general manager at Hardel Mutual Plywood Corp., has a simple yet powerful management mantra: “You either move forward, or the competition will take you over.”

Piliaris’ mantra to never settle echoes throughout Hardel – the company has become one of the largest and most successful plywood manufacturers in North America. Founded in 1953 as a worker-owned softwood plywood mill, Hardel has grown to be a plywood powerhouse with 280 employees working out of a facility that spans seven acres. Under this roof, more than 500 different products are manufactured, including 170 million square feet of plywood on a 3/8-inch basis, annually.

Hardel Mutual Plywood is a vibrant and successful operation. But, over the course of the last 60 years, the company has had its trials. One of the most significant setbacks for Hardel occurred on Labor Day 1996 when the company’s entire manufacturing facility burned to the ground. “We lost everything,” Piliaris recalls. “But we worked hard and were able to rebuild and get back to work.”

Only 18 months after the fire, Hardel was up and running again with a new manufacturing facility. The company didn’t just rebuild – it improved. The setback of the fire gave Hardel the opportunity to construct a state-of-the art facility ideal for the future.

In 1997, Hardel opened the doors of its new plywood manufacturing plant in Chehalis, Wash. The facility measures 300,000 square feet and sits on a 58-acre site. “We are three times larger than we were before the fire,” Piliaris adds.

“We are the most diverse plywood mill in the country,” Piliaris notes. “We do sheathing, but we also specialize. We’re one of only a handful of mills to offer 4×8 up to 5×10-foot plywood panels.”

Hardel’s panel patching procedures allow the company to customize orders for final application. The company also has the capabilities to use two-component synthetic patch material or repair with wood patches exclusively.

Hardel’s ability to customize and diversify helps it remain stable while the economy ebbs and flows. “A lot of companies only do commodity sheathing. Over the past 25 years, we have been diversifying our company,” Piliaris explains. “We can take a beating when the economy slows because we have so many products available to the market.”

For Hardel, being diverse does not mean being distracted. The company is focused on producing the best-quality products – even with more than 500 items in its catalog. “We’re known around the world for the quality of our products,” Piliaris adds. “In our specialized, value-added products, the volume may not be as high as some of competitors, but our product is more than a commodity.”

When Hardel built its new plywood plant at the Chehalis location, it not only built a state-of-the-art facility ideal for producing large amounts of quality products, but also a facility that was environmentally clean and considerate of the environment.

The company states that it worked hard during the design phase of its new manufacturing facility to commit to the lowest possible emissions of pollutants. The new Hardel plant was the first plywood plant in the Pacific Northwest to install a regenerative thermal oxidizer on its veneer dryers to control “blue haze” emissions.

What’s more, all pollution-control equipment installed at the plant met or exceeded “best available control technology” requirements, including an electrified filter bed, which was installed as a pollution-control device on the mill’s wood waste-fired thermal fluid heater.

According to Hardel, the new facility is one of the cleanest of its kind, with the lowest environmental impact of any wood products plant in the United States today. “Over the last two years, the plant has shown zero discharge of process waters to the local wastewater treatment plant by committing to a very stringent recycle and reuse program,” the company claims.

“As a company, it’s important for us to be responsible to our community and its natural resources,” Piliaris notes. “We are always trying something new, something that has not been done before.”

For Hardel, trying something new means developing a product portfolio, as well as generating ideas on how to run the business more efficiently and with less of an impact on the environment.

The company states that it generates more than 18,000 tons of wood waste per year in the process of manufacturing plywood. Rather than sending the waste to landfills, Hardel collects all of the wood waste generated on the manufacturing floor and burns it in a thermal heater to efficiently produce heat for plywood production.

“Back in 1953, there were 52 other owner-worker co-ops like us in the United States; now we are the only ones,” Piliaris says. “The fact that we remain and have grown to the size that we are, even after the business burned down, is a testament to how we run our operation.”