Back to Profile Gallery > Hart & Cooley 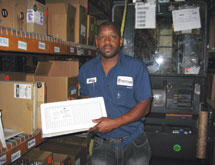 From its roots as a modest steel manufacturing plant founded in 1892, Hart and Cooley has grown to become a leading-edge HVAC components firm featuring levels of innovation and experience not often found in its competitors. For more than a century, the Grand Rapids, Mich.-based company has maintained a focus on customer service, responding to client’s changing needs efficiently and effectively.

“I’m so proud of the company’s ability to adapt,” Director of Supply Chain Tom Day explains. “We’re constantly looking for ways to improve to make sure we’re doing what’s right for the customer.”

The company specializes in residential HVAC products such as grills, registers, diffusers, ventilation systems and chimney components. “We offer a one-stop-shopping experience for customers, so they can order all HVAC products rather than going to a number of specialists,” he says, adding that most competitors focus on certain product systems.

The company’s vast range of products has been developed through a number of acquisitions taking place between 2000 and 2010. As a result, the company has gained the position as a convenient, one-stop shop for clients, but this did not come easily. “As you acquire new companies, you begin to realize each organization has its own way of going to market and taking care of customers,” Day says. “It was a challenge at the time, and we weren’t very easy to work with.”

The company began focusing on streamlining processes and ordering procedures, and Hart and Cooley eventually developed a method that allows customers to order a variety of products and receive them in one bundle. “At one time, customers were ordering on different systems depending on which product they’re purchasing, and it had to be frustrating to do business with us,” he admits.

The company adopted the Oracle order management system to streamline the entire process. “Customers can now go to one place to order any product,” Day says. “Everything comes in one bundle now, and we’re working toward providing the same level of service as Amazon.com.”

Hart and Cooley’s ability to adapt to a fast-paced market may have been developed throughout the years, but founders Howard Stanley Hart and Norman P. Cooley created a solid foundation when they formed the company more than a century ago. Originally established as Hart & Cooley Manufacturing Co. in Chicago, the company became the first cold-rolled steel plant west of Pittsburgh. Hart himself made several major industry breakthroughs during this time, inventing a steel heating register that proved superior to heavy, cast-iron models, according to the company.

In 1901, the company moved offices to New Britain, Conn., where it became the first manufacturer in the nation to produce warm-air registers from stamped steel – an immediate success.

Even in spite of the Great Depression, the company continued to persevere through difficult times to become the world’s largest producer of warm-air registers. By 1942, the company put production in the back seat to contribute to the country’s national defense needs, working three shifts on a 24-hour basis to produce water-tight shipboard electrical boxes and 60-millimeter mortar shells, the company states. Hart and Cooley continued to increase its product lines throughout the next several decades, and took part in a series of acquisitions to further expand its capabilities.

Hart and Cooley’s ability to transition and adapt to emerging trends has allowed it to provide competitive price points. The firm previously outsourced some of its product production to China and India, which it moved to its facilities in 2010 and 2012, respectively, to deliver more timely service. “We don’t have the lead time we previously did, and it’s allowed us to become even more competitive in our price point,” Day says.

“We’ve been implementing lean strategies plant by plant, developing cells to ensure all work is performed within each unit,” he says. “Previously, certain pieces would be manufactured in one part of the factory, and would have to be moved to the other end to finish it off.”

The company measures quality and scrap within each cell to ensure the products are manufactured effectively. This focus has improved Hart and Cooley’s productivity and efficiency in each facility.

Hart and Cooley also has adopted a just-in-time ordering program to improve product quality and efficiency. “We used to order six months of raw materials, but now we’re working with vendors to bring products in as we need them,” Day says. “This allows us to constantly monitor quality throughout the whole process.”

Since its inception, Hart and Cooley has been dedicated to service in the communities in which is operates, giving back in a variety of ways. The company has been involved in a number of charity events such as Relay for Life, Guiding Light Mission of Grand Rapids, Box tops for education, blood drives, Angel Tree, adopt a highway, and it also implements a companywide recycling program. “I believe it makes us a better company if we also give back to our community,” Day says.

The company also focuses on the wellbeing of its employees, providing opportunities for career development. A number of Hart and Cooley employees boast 25 years or more working for the firm.

“When I think of the team I lead, I see so many energetic, dedicated people who want to get the job done well, and that’s what’s truly exciting,” Day says. “I believe we’re doing things right as a corporation, and I’m excited to see what happens in the next several years. I see a very bright future for us.”