Back to Profile Gallery > Henniges Automotive 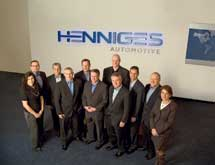 Ah, that solid sound made when a car door on a showroom floor closes – how many sales are made or lost by that? Producing that sound and keeping out a whole lot more – such as water, noise and dust– is the specialty of Henniges Automotive, which manufactures sealing systems for the automotive market worldwide.

“A lot of sound is from the seal,” CEO Rob DePierre points out. “If you look at the seal, it’s really a hollow bulb that collapses as you shut the vehicle. If the stiffness of that bulb is too high, then you shut the door and it doesn’t shut all the way, so you hip-bump it. That’s not acceptable. If you don’t have enough stiffness to it, it has a clanking sound when it shuts, and it doesn’t seal appropriately.”

Another problem prospective purchasers of a vehicle may notice is caused by the seal’s coefficent of friction and is called squeak and itch. “You can hear it in your vehicle when material moves relative to what it’s mounted against,” DePierre notes.

This is the reason why controlling the formulation of the ethylene propylene diene monomer (EPDM) synthetic rubber from which many of the company’s seals are manufactured is so important.

“We mix our own rubber in every region,” DePierre points out. “What makes EPDM up can vary based on the type of vehicles and the design. You can have lots of different recipes to meet the needs of the automotive design and performance requirements. So we get EPDMs, carbon black, oils and different additives and enhancers in our recipes to create the rubber product we need. The recipes are proprietary – that’s where we have a competitive advantage.”

Most automotive seals are molded from extruded rubber that is cut to length and then trimmed so it is ready for injection molding of the corners. Post-assembly work includes adding pins and small brackets and coating. “Every one is a little bit different,” DePierre says.

With such close scrutiny from consumers and manufacturers alike, consistency and quality are paramount in the manufacturing of Henniges Automotive’s seals and in its encapsulating of automotive window glass with rubber.

“We have a very rigorous and disciplined process around key metrics, such as safety, quality, delivery, associates and financial,” DePierre emphasizes. Under each of those headings are metrics, such as the number of formal complaints, energy costs, preventive maintenance and  operation’s productivity.

“Each of those metrics we track and measure monthly, and look at how we are performing opposite our targets,” he explains. “When our operation is not on target, we go through a very disciplined problem-solving ap­proach.” Henniges has trained more than 3,500 associates in the plan-do-check-act problem-solving methodology developed by quality expert W. Edwards Deming.

Lean manufacturing methods such as single-minute exchange of die (SMED), which prescribes quick changeover techniques for running another product, also have been launched throughout the company’s 11 international manufacturing plants. “Every plant has several lean and SMED projects ongoing,” DePierre points out. “We review those on a monthly basis project by project, and we’re progressively transforming the company into a lean enterprise.”

Henniges is working to identify the causes of variations in its manufacturing. “We’ve set up a lab where we have identified over 100 inputs into an extrusion line,” DePierre relates. “We optimize through the design of experiments what the key inputs are so we can reduce the variation coming out the back end.”

The company was formed in 2007 from Metzeler North America and parts of GDX. The result was named after Ernst Henniges, who founded a company in 1951 in Germany that made molded rubber parts.

“We didn’t really want to use either name,” DePierre says. “We wanted a new company that represented the new way of thinking and new style of working. We decided on a new name for both companies.” Its other product group makes antivibration bushings for engine and body mounts.

The company has dozens of small competitors in China and India. “In terms of true global competitors, there’s ourselves and four other companies,” DePierre insists. “There’s only a few that can do it globally.”

Henniges’ clients include Ford, GM, Daimler, BMW, Volkswagen and FAW. “We are strong with German and the American OEMs, but we need to strengthen our position with the Japanese OEMs,” DePierre says. “Our plans are to continue to grow, become more global, follow the customer and continue to push innovation to win new business.”