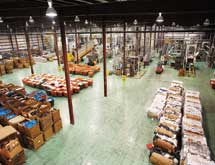 It’s not as weighty a question as “To be or not to be?” but “Paper or plastic?” might be just as frequently debated as any philosophical question in the modern day. For South Carolina-based Hilex Poly Co., however, the choice is clear. As one of the world’s largest recyclers of plastic shopping bags, Hilex Poly argues that plastic bags are the more eco-friendly choice over paper.

Vice President of Sustainability and Environmental Policy Mark Daniels says the company has invested heavily in its facilities and equipment in recent years to ensure that it has the capacity and capability to recycle plastic bags and other commercial polyethylene films. In fact, a recent expansion project at the company’s recycling facility in North Vernon, Ind., made it the largest closed-loop plastic bag recycling facility in the world.

Today, Daniels says the company has a market share of 35 percent and a broad customer base of mass retailers and grocery store chains. As the company works to change public opinion of plastic bags, Daniels says Hilex Poly remains committed to producing high-quality products using the most environmentally responsible method possible.

Used plastic bags and wraps are collected in more than 30,000 recycling bins at grocery stores and retailers across the country. These bags, along with other polyethylene films used by retailers, are taken to distribution centers until there are enough to be processed by Hilex Poly.

Those bags are shredded and the material is sent through wash lines, where contaminants are washed out and other materials such as paper separated from the plastic. The plastic then is converted into flakes that are compounded into polyethylene-resin pellets, which in turn are used to manufacture new bags. Daniels says the combination of state-of-the-art equipment and the company’s pro­cesses means Hilex Poly starts from a stronger position with its materials than many of its competitors.

“We’ve cracked the code on how to make a very good post-consumer polyethylene pellet,” he says.

One code Hilex Poly still is working to crack is changing the stereotypes about plastic bags, and Daniels says the company is making progress in that regard. “The biggest challenge we have today is certain legislative bodies have been given some very misguided information with regards to plastic bags,” he says, adding that Hilex Poly has started websites such as Bagthe­ban.­com and Thetruth­aboutplasticbags­.com to in­crease public awareness.

A few local governments such as San Francisco have issued bans on plastic bags because they believe plastic bags are not as eco-friendly as paper bags. Daniels says Hilex Poly is working to educate legislators that manufacturing plastic bags has a smaller carbon footprint than pulping paper, and that one truckload of plastic bags equals seven truckloads of paper bags in terms of weight.

Daniels says the San Francisco plastic bag ban went into effect with the intention of cutting down on litter, but he says without the recycling bins in stores, plastic bag litter actually in­creased in the city. “There’s no amount of litter that’s acceptable, but we want to let legislators know what the true facts are about our products,” he says.

One of those facts is that plastic bags often are recycled before they ever arrive at one of Hilex Poly’s facilities. Daniels says somewhere be­tween 40 and 65 percent of plastic shopping bags are reused by households before they are discarded. As of today, 11.8 percent of plastic bags, sacks, and wraps are recycled into post-consumer content for the manufacturing of new plastic bags, but Daniels says that figure has been increasing rapidly in the last few years and should continue to rise. Hilex Poly’s goal is to include 40 percent recycled content in its bags by 2015. “We are aggressively working to reach that figure,” he says.