Back to Profile Gallery > Honda of South Carolina 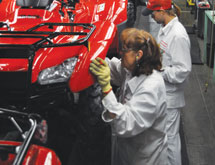 In 1951, just three years after founding Honda Motor Co., Soichiro Honda and Takeo Fujisawa presented the concept of “The Three Joys” to describe the company’s ultimate mission. Honda’s idea that the company should be about the “joy of buying, the joy of selling and the joy of creating” continues to define it more than 60 years later.

For the 850 associates working in the powersports division of Honda in South Carolina (HSC), the joy of creating can be felt in every aspect of its manufacturing operations.

“I’m most proud of the pride our associates take in producing each and every unit with the highest quality in mind,” says Brian Newman, president of Honda of South Carolina. “We have a great team here that cares about what they do every day.”

HSC’s 536,150-square-foot facility in Timmonsville, S.C., is the largest manufacturer of all-terrain vehicles (ATV) in Honda’s overall global footprint. The plant, established in April 1997, has the capability to produce more than  250,000 ATVs in nine different multipurpose and sport models yearly. This represents roughly 98 percent of Honda’s total ATV production around the world.

Units produced at HSC are shipped to one of multiple warehouses operated by American Honda, the company’s U.S. sales division, before ultimately arriving at worldwide dealerships.

The Timmonsville manufacturing plant performs every step of the ATV production process including aluminum casting, machining and engine assembly. Honda uses plastic injection techniques to create the fenders and side covers used on its ATVs, and produces fuel tanks using blow mold technology. Other capabilities include welding and painting of frames, carriers and front pipes. “We’re very much a synchronized manufacturing facility,” Newman says. “We can do everything in-house, from engine manufacturing to producing the frame, mating the engine to the frame, final assembly and quality verification.”

The company is the only ATV manufacturer that produces its own engines in-house. “[Soichiro] Honda started this company with an engine, and anything he could put around it he did,” Newman says. “Our company’s strength is the engine technology, the capability and torque you get from a Honda engine.

“It is because of our engine performance that our customers know that the Honda will be dependable and reliable which makes us the best on Earth.”

The processes change based on the number of parts required for a specific model, with changeovers accomplished within an average of two minutes. Total cycle time varies based on the model, Plant Manager Scott McKenzie notes.

All of Honda’s manufacturing associates are trained on all models, each of which has its own specifications and quality standards.

The majority of the parts used in Honda’s ATVs come from its supply base located in North America as well as around the world. Honda’s corporate supply and development team works with suppliers to secure parts generally on a just-in-time basis, depending on the supplier’s location. “With local suppliers we can get our parts in two days before producing an ATV or engine, while with global suppliers they may be received six to nine days before production,” Newman says. “We have a very strong supplier relationship, which is a must in order for us to supply high quality products yet at a reasonable prices for worldwide customer satisfaction.”

Efficient production has been at the core of Honda’s operations practically since its inception. Newman, a veteran of the company for 32 years, notes the first things he was trained on were work movements and methods that are today commonly embraced within the lean manufacturing methodology.

All associates are encouraged to offer ideas to improve the manufacturing process. The company has adapted both a quality circle committee process as well as a suggestion system to encourage input.

“Honda truly cares about its associates and wants each associate to become the expert in doing the process efficiently. We do not consider them employees, as this is their company and we all must secure our future as one team,” Newman says. The company reinforces this through its uniform – donned by all levels within the company, including management.

Honda’s care for its associates came to the forefront during recent trying times for the company brought about by the onset of the global recession in 2008. The effects of the recession were particularly hard felt by Honda of South Carolina, as its products are generally considered luxury items.

In 2008, the plant saw its orders decline. Rather than laying off associates – an action Honda prides itself on having never taken – HSC retrained its associates and re-examined its inventory during the down period, reducing warehouse stock to a minimum. Honda is also further embracing energy efficiency and sustainability within the facility and working to expand its production capabilities.

“What we produce today gets shipped today and we became a much stronger and more lean and efficient company as a result of the recession,” Newman says.

The plant’s philanthropic committee supports a number of non-profit organizations and community events, HSC strives to distribute support both through monetary donation and in-kind labor. HSC utilizes five categories to establish charitable giving: education, health and human service, arts and culture, civic and environmental. “Our associates en­gage in supporting several community events such as The Heart Walk, Cancer Relay for Life and The United Way,” according to philanthropic committee member Michele Pridgen.

“Honda wants to be a company that society wants to exist,” Newman says. “What that means to us is that we have to be involved with the community. It makes me proud to know we have associates here who get behind so many events.” mt