Back to Profile Gallery > HYDMECH 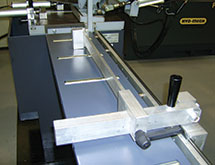 HYDMECH isn’t just “known” in the band saw market, it created it and remains a leading provider of the manufacturing technology today. In fact, it recently was named the No. 1 sawing equipment brand for service centers by Metal Center News, which is pretty remarkable considering that band sawing was not its chosen industry when Stan Jasinski founded the company in 1978.

Jasinski, who immigrated to Ontario from Poland, was an engineer by trade and founded HYDMECH as an engineering consulting firm specialized in hydraulic and forestry equipment. The only issue was that Jasinski was hard pressed to find a saw that fit his customers’ needs, so he leveraged his engineering know-how and built his own mitering saw, not knowing that he would actually kick off a completely new business for HYDMECH. In 1980, the company switched focus and has never looked back. Today, HYDMECH is a global manufacturer of band saws, cold saws and material handling equipment that can be used as standalone pieces or integrated systems.

“The way this industry and technology has involved is that the circular sawing market dominated the business, but now metal sawing has advanced and surpassed that business,” Vice President of Sales and Marketing Rick Arcaro explains. “So from the 70s to 80s and into the 90s, this business just grew tremendously.”

That growth was noticed by investment group MEP, which purchased HYDMECH in 2007 and introduced it to the world.

“This really is a success story that started on a piece of paper with a few guys in a garage and today is a global corporation,” Arcaro says. “We have four manufacturing sites in Woodstock, Ontario; Arkansas; China and Pergola, Italy.”

HYDMECH’s growth and success, however, are not exclusively tied to its standing as first to market. Instead, the company’s strength has been its eagerness to adapt to its customers’ changing needs and integrate user feedback into its designs. This led to the company launching into the sawing market with three models to now producing 50. When it comes to many of its products, Arcaro explains that although the basic concepts and uses have changed little, the incremental improvements made over the years have consistently edged up the technology’s performance.

“If you look at the automotive business, cars are the staple product and have been the same but now instead of manual seats and windows, you have automatic seats and windows and you continue to move up the line,” Arcaro says. “Band saws are the same way. Although the technology hasn’t changed, the entry-level machine, which is our S-20, is still being refined, designed and built around consumer needs. The S-20 has now created this commodity-type market.”

HYDMECH has been able to take a sophisticated technology and design fairly standardized products. Whereas many of its competitors deal primarily in custom-made products, HYDMECH has taken the opposite route to become a volume manufacturer. A competitor might build one or two at a time, but HYDMECH builds 10 and 85 to 90 percent of its existing product are stock products available for immediate delivery. It’s not exactly a one-saw-fits-all scenario, but with a portfolio of 50 products, HYDMECH shows a good probability of having an existing saw that will meet its customers’ needs.

“Building in volume doesn’t necessarily take you out of the customers’ needs,” Arcaro explains. “In most cases when a customer comes to us, they have an idea of what they want, but don’t know exactly what they need. That’s where our regional managers come into place because they are true sales consultants, not just order takers.

“They can go into a client’s facility, recognize an application need or bottleneck and offer a one-stop-shop machine with the right sawing capabilities complete with material handling. They can install it, show you how to use it and how to make money with it.”

At HYDMECH, helping customers earn more profit has always been the focus, and Jim Hutchinson, director of customer service, says its customers are beginning to see band saws as a key aspect of their overall businesses.

“Customers are becoming more sophisticated and embracing technology,” Hutchinson says. “For years, band sawing was always considered a necessary evil but now is being looked at as a profit center.”

HYDMECH recently sat down with one of its clients to discuss the top-5 areas of concern challenging service centers today and ways to address them. These are:

HYDMECH has strived to address these concerns with its products. For instance, the company designs each solution with the goal of offering the best-cost-per-cut. Arcaro explains that this process considers a variety of factors.

Eight years ago, HYDMECH tweaked the nature of its designs to further mark its products as offering the best-cost-per-cut. Rather than full fabrication, HYDMECH began using castings on its saws and the switch has reaped multiple benefits. First, castings can be machined to tighter tolerances as opposed to having a skilled welder create components manually.

Arcaro explains that HYDMECH removes “grey manufacturing” where parts have to be adjusted to fit. With castings, “it either fits or doesn’t’ fit,” he stresses. “The employee can grab the part off the shelf, put it together and go to the next one so it really cuts down on our assembly hours.”

HYDMECH also found that the castings resulted in superior performance. They cut faster and are much more quiet, which helps manufacturers increase their safety. The low decibel level eliminates the need for hearing protection gear.

“We’ve started to blend castings into our product lines,” Arcaro says. “We started with each family group and progressively worked our way through each lineup. It’s been an ongoing process to do it, but now we are well ahead of the game.”

The castings do have their limitations, though. Castings work well up to a certain size. After that, fabrication is the better option. HYDMECH can deftly switch between the two thanks to its in-house ability in engineering, assembling and product support. And its expanded service division can handle after-sale services for customers. It also manufactures many components in-house and sources components from third parties, always looking for parts that can be found globally.

“We have machines on all continents and we have to find parts that are available on all continents,” Arcaro says. “We go through globalization sourcing of parts so if someone in Australia needs a bearing, they are not strapped into one brand that’s only in North America. We use standard industry components that you can swap for alternative brands if you need to. Our customers like having that accessibility to parts.”

Using standard components for its equipment is just one of the ways HYDMECH responds to its customers’ demands. Because the company has engineers around the globe, it can monitor worldwide trends and leverage best practices across its entire operation. That ability has turned a humble North American operation into a global force in manufacturing.