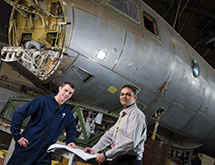 The company began as a modest operation that distributed products for the commercial marine industry. Over time, IMP Group grew through acquisitions and today employs over 4,400 employees. Its IMP Aerospace & Defence business unit has several operations of its own, Kumpic notes.

These include IMP Aerospace, which offers engineering and maintenance support to the DND and other international customers for fixed and rotary wing aircraft. Its IMP Aerostructures division manufactures and integrates structural assemblies and components for clients such as Boeing, Lockheed Martin Corp., Bombardier and Bell Helicopter.

Kumpic credits IMP Group’s success to its diversity. “Within the aerospace and defense sector, we have a number of skills we can draw upon, including manufacturing services and technical services,” he says.

Its diversity also is reflected in its client base. In addition to its work for the DND, “We’ve done work for the Royal Norwegian Air Force, the Spanish Navy and the Mexican Air Force,” he says, noting that the company wants to grow its business outside of Canada. “As well, within our core manufacturing divisions, we’re taking as much advantage as possible with our current favorable exchange rate.”

IMP Aerostructures and IMP Electronic Systems have embraced lean manufacturing concepts, Kumpic says. “We use these processes to ensure our high quality is maintained and that we remain cost competitive,” he says, noting that this has contributed to winning the Boeing Gold Performance Award two years in a row.

IMP has benefited from the use of Oracle’s JD Edwards OneWorld ERP software. “That has allowed us to efficiently plan our material requirements so we can streamline purchases as best we can by taking in consideration the lead time of our suppliers with production demand,” he says.

As well, IMP Aerospace & Defence works with local vendors that supply and manage supplier-owned inventories at its locations. “They ensure that minimum quantities are maintained within our operation at all times,” Kumpic says.

“The vendors own the material until we actually issue it to the job,” he says. “We’re always looking at innovative ways to improve our productivity and maintain a high level of customer satisfaction.”

IMP Aerospace & Defence has coped with drops in defense and aerospace spending in Canada. Over the past year, “There have been significant budget constraints and we’re seeing higher global competition,” Kumpic says. “It’s been a challenge.”

Despite these conditions, IMP Aerospace & Defence continues to maintain a strong position. Thanks to the recent acquisition of companies like Cascade Aerospace, “We’re being recognized as a major player in Canada and we’re receiving performance awards from our clients,” Kumpic says.

He notes that IMP wants to develop a presence in other areas, including the United States. “There is a significant bit of defense business there,” he says, noting that the company seeks new partnerships. “Given IMP’s strong technical capabilities and Canada’s weaker currency exchange to the U.S. dollar, our products and services represent excellent value to the U.S. marketplace.”