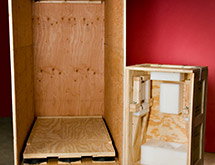 Index Packaging Inc. might be a more modestly sized player than some competitors, but no one is better at customer service or product delivery, President Mike Wiles asserts. “[If] the customer sends a request for a price quote, we’re back to them within the hour,” he says. “We make it a point to be everything they need.”

Based in Milton, N.H., Index Packaging manufactures foam, wood and corrugated packaging products. Bill and Connie Lander founded the company in 1968 with their invention of the TIP (N) TELL shipping indicator. That helped plant “the seeds that started the company we are now,” Wiles says.

Today, Index Packaging operates from a 120,000-square-foot facility that features equipment and warehouse space that can handle quick-turn, vendor-managed inventory or standard customer lead times. “A third of our customer base is distributors,” Wiles says.

The remainder consists of end-users of the packaging, which includes “every industry you could think of,” he says. “They range from sheet metal to aerospace to defense. In this environment, there are many opportunities for us.”

Index Packaging focuses heavily on manufacturing quality. Not only does its engineering manager also hold the role of quality manager, but its department supervisors are responsible for performing quality checks, Wiles says.

In December 2014, the company implemented lean initiatives throughout its wood crate operation. “We developed a whole new layout that streamlines the material flow through the shop, from the back end to the front end out to the shipping dock,” he says.

The process enabled Index Packaging to incorporate an unused part of its facility. “We [extended] our wood production down into that vacated area,” he adds. “That [represents] our first step toward lean ideas.”

Index Packaging is a nearly zero landfill facility. But that is not only because the company wants to be green, Wiles says. “It’s because it makes financial sense,” he says.

The company has avoided sending waste to the landfill with the help of its high-speed grinder. “Any wood we don’t reuse, we grind into chips used for bio-mass fuel or to generate paper pulp,” Wiles says. “Everything winds up in the grinder and can be sold as an alternative fuel source.”

The company also recycles polyethylene foam by melting it down into plastic bricks and selling it, he adds. “We recycle more than 96 percent the waste products that we create here,” he says.

Index Packaging’s vendors are critical to its success. This includes Metropolitan Staple Corp., a supplier of nailing and stapling equipment and accessories. Previously, Wiles notes, his company used to buy products from Stanley-Bostitch.

But when Index Packaging decided to pursue other vendors, it went to Metropolitan Staple, which managed to deliver high-quality fasteners and lighter nail guns. “Having something a bit lighter is good for all the employees,” he says. “They came in with a nice, competitive price. Once we switched, we never looked back.”

Index Packaging is coping with staffing issues in its market. “In New Hampshire, we are below full employment,” Wiles says. “We are really struggling to employ enough staff to man the machines and the glue stations to get our products out to the customers.”

Wiles and his management team have brainstormed ways to cope. However, getting people through the front door is not Index Packaging’s only challenge. “Often times, we have difficulty keeping them here,” he admits.

One area that Wiles and the management team are exploring is the company’s starting pay rate, and whether or not it should be increased. “If they’re leaving because they can make another dollar per hour [somewhere else], that’s a mistake on our part,” he says. “We had a hard enough time getting them in here in the first place.”

Wiles joined Index Packaging in 1994 and became president in December 2014. He is proud of how the company has grown by sticking to its founding principles, which include having zero debt. “There are extraordinarily few companies that can say that,” he states. “Usually, everyone rides the backs of banks and vendors. We’ve never done that and if I have anything to say about it we never will.”

Wiles looks forward to 20 more years at the firm. “What I’m hoping for in the future is a controlled, steady path to growth,” he says, noting that he hopes to grow the company’s revenues to $40 million before stepping down.

Employee retention also will remain important. “Hopefully, we will have continued successful employment and people deciding to make a career out of working here,” he states.