Back to Profile Gallery > Industrial Sales and Manufacturing Inc. 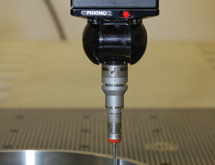 Jim Rutkowski Sr. started Industrial Sales and Manufacturing (ISM) Inc. with a single drill press in a one-car garage in Erie, Pa. The company’s current facilities are only five blocks away, but that’s no indication of how far the company actually has come since 1963. Jim Rutkowski Jr., the company’s general manager and treasurer, says ISM has grown into a major contract manufacturer of components for OEMs across multiple sectors, and credits its flexibility, skilled workforce, diverse equipment capabilities and services for that success.

According to Rutkowski, ISM has worked with more than 800 OEMs throughout its history, with nearly 50 years of experience in fields ranging from medical to transportation to power generation to recreation. With its distinct capabilities and vast knowledge base, ISM has manufactured more than 20 million parts based on more than 15,000 distinct drawings over the years.

A major part of the reason why ISM has thrived for so long is because it has the ability to be practically all things to all customers. The company provides machining, fabrication, assembly and finishing services under one roof, with some of the most state-of-the-art technology in the industry. Among the components manufactured by ISM are machined components such as bearing caps and housings, machined fabrications and weldments, piping assemblies, numerous engine components, custom fasteners and complex mechanical and electrical assemblies. The diversity of the company’s output also is reflected in its ability to manufacture virtually any number of components in almost any grade of material.

“We can truly make from one piece to 250,000 pieces,” Rutkowski says. “Think of ISM as a manufacturer’s buffet for OEMs with virtually everything needed to produce their product.”

Despite the company’s large scale – with more than 160 employees and 125,000 total square feet of production space – Rutkowski says one of ISM’s biggest areas of focus is making sure each and every person it works with feels valued. “We’re a true family business in that our customers and our employees are treated like family,” he says.

People are the backbone of any organization, and Rutkowski says ISM is working hard to make sure its people have the most experience and expertise in the industry. Although finding people with the necessary skillsets to become major assets to the company has been one of ISM’s biggest challenges in recent years, Rutkowski says the company has been committed to training its people to the highest standards in the manufacturing world. He says the company’s efforts include training its employees in the latest lean manufacturing principles, as well as the most up-to-date machining practices.

Having the best people possible is more important than ever, thanks to the way the Internet has opened up access for customers to the entire manufacturing marketplace. “The customer, through the Internet, is able to access many top-flight suppliers,” Rutkowski says. “They are also looking for companies that have the access to top-flight employees’ processes and equipment that have redundancy backing them up in case of emergency.” People are the backbone of any organization, and Rutkowski says ISM is working hard to make sure its people have the most experience and expertise in the industry. Although finding people with the necessary skillsets to become major assets to the company has been one of ISM’s biggest challenges in recent years, Rutkowski says the company has been committed to training its people to the highest standards in the manufacturing world. He says the company’s efforts include training its employees in the latest lean manufacturing principles, as well as the most up-to-date machining practices.

To ensure that its facilities always are capable of keeping up with customer demand, ISM works hard to keep its equipment on the cutting-edge of the manufacturing industry. With more than 58,000 machine shops and fabrication facilities in the United States alone, Rutkowski says ISM’s technical edge is essential.

“Our continual investment in new technology is one way ISM differentiates itself from our competitors,” he explains. “It is also the reason we believe ISM can compete with any company anywhere.”

The company’s slogan – “Built in Erie. Found Around the World.” – is very true when it comes to the products the company produces, he adds.

Rutkowski says location is another distinct advantage. All of the company’s facilities are within a one-day drive of more than 60 percent of the continental United States. This means the company can ship components for less than many of its competitors to a larger portion of the country, giving it a greater ability to service customers on a timetable that meets their requirements swiftly.

Staying competitive also requires a dedication to attaining the highest quality standards.  This dedication to high quality is demonstrated in the certifications ISM has achieved such as; ISO 9000, TPG certification for Welding and a SHARP’s certification from OSHA’s Safety and Health Achievement Recognition Program. Backing up these certifications is the company’s full quality control staff of eight people, and its parts cleaning line is capable of cleaning parts to  exacting standards of Millipore specifications, Rutkowski adds.

Rutkowski says ISM has big plans for the near future. The company has its sights set on expanding its presence in the medical products segment, as well as food processing. The natural gas engine market is another that the company intends extend its reach in the next few years, Rutkowski adds.

Just as diversity and flexibility have been the keys to ISM’s growth in the past, those attributes will continue to drive its growth for years to come. ISM also is finalizing its plans for a metal additive manufacturing center of excellence. No matter what the future holds for ISM, the company plans to hold itself to the same high standards of quality that the company has become known for throughout the industry.

“Our growth plans include diversification into new industries,” Rutkowski says. “Achieving that goal will require a continual reinvestment in its people, equipment and capabilities.”