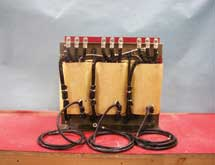 Johnson Electric Coil Co.’s ownership and management believe in at­tracting new clients while keeping to the company’s roots as a small, family-owned manufacturer. “We’ve been effective in attracting new business, but our goal is to be what we call ‘successfully small,’” says Bill Bockes, president, CEO and co-owner of the Antigo, Wis.-based company. “We know who we are and what our niche is; our goal is to keep jobs in Antigo, stay family-owned and not go beyond the parameters of what makes us successful.”

Johnson Electric Coil was founded in the Chicago area in 1934 by Lawrence Johnson, who began by repairing neon transformers in his basement. When World War II broke out, Johnson – who by that time had established a factory – was called upon to build transformers for the  U.S. military.

After the war, the company completely transitioned into manufacturing, and the operation moved to Antigo in 1979. It is now in its third generation of family ownership.

Johnson Electric Coil produces custom products for each of its customers. “We can provide transformer ex­pertise for someone designing a product,” Bockes says. “We can produce all the transformer components that go into an OEM’s products.”

Johnson Electric Coil’s manufacturing process starts with winding coils on one of its winding machines. The company explains that it uses a variety of types of coils, including copper and aluminum.

All products are tested to verify they meet both customer specifications and the company’s workmanship standards.

“Our customers always give us a lot of praise for our quality, service and our ability to deliver a design and a product quickly,” he stresses.

The company works closely with a number of suppliers to procure the components used in its products, particularly lamination for cores and magnet wire used in winding coils.

Bockes credits Johnson Electric Coil’s adoption of lean manufacturing methodologies for much of its success, particularly during the last few years.

“Our main focus has been to very aggressively apply lean manufacturing techniques and initiatives to our operation,” Bockes says. “Lean has been a large measure of our success during the recession.”

The company’s quality and productivity standards are influenced largely by lean methods including eliminating waste and using work cells. Bockes says productivity in particular is driven by the “5S” methodology.

“We’re very focused on making decisions based on our mission, our values and lean manufacturing,” he explains. “Having that consistent language really helps us keep our people on track.”

A key partner in Johnson’s lean implementation is Northwest Wisconsin Manufacturing Outreach Center (NWMOC), which is located on the University of Wisconsin-Stout campus. The center provides on-site services and training programs to manufacturing companies in 33 counties in Wisconsin.

“Manufacturers come to NWMOC for the impartial guidance they need to increase the competitive advantage for their businesses,” the center says. “We provide point solutions for specific issues or undertake company-wide lean transformations.”

“Lean really has empowered our people,” Bockes says. “It’s created a workforce that’s far more invested and interested in their daily activities here rather than just coming in and collecting a paycheck.”

“Participants heard a real-life story about our small, family owned, third-generation manufacturer that completely transformed our culture from one of control bossing to one of continuous improvement, employee involvement and lean manufacturing principles,” Bockes says of the presentation.

Attendees also learned about how to recognize when a company’s survival depends on significant change in a company’s culture, he adds.

“Our company was able to report that through the worst economic times since the Great Depression, we were able to make significant improvements in wages, productivity, and profits,” Bockes says.

The conference had a total participation of 240. Its purpose was to strengthen small and medium manufacturers in Wisconsin, a state with the highest number of manufacturing jobs per capita in the country, the company says.

“Because of the importance of manufacturing jobs in the state, programs such as those of NWMOC and the Conference are vital so that these companies can continue to provide and improve the level of employment,” the company adds.

“We were honored to be asked to help strengthen other manufacturers in the state.”