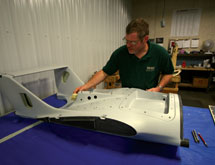 The Bennington, Vt.-based firm designs and manufactures composite structures for the aerospace, industrial and medical industries. Kaman Composites’ history goes back to 1979, when Fothergill & Harvey, a U.K.-based technical textile manufacturer, formed a joint venture with Oak Industries, based in Hoosick Falls, N.Y.

The two opened a plant in Bennington, where they manufactured carbon fiber tabletops for x-ray imaging and airplane interior components. But in 1987, Courtaulds Advanced Materials, a specialty materials firm also based in the United Kingdom, purchased the business.

“Through that period, the company continued to grow and expanded its aerospace business and medical imaging business,” Sharkey says. In 1996, seven members of the management team purchased the Bennington division from Courtaulds.

“It has given us more access to bigger customers and potentially a share in bigger contracts,” Sharkey says. The firm’s clients include The Boeing Co., Lockheed Martin, General Electric and Phillips.

Kaman Composites Vermont strives to be flexible finding solutions to its clients’ problems, Sharkey says. One area where the company regularly shows its skills is in the development of lighter-weight products.

“Usually, our customers have a problem [when] aerospace components or a subsystem is too heavy,” he explains. “We are able to redesign with engineering and process development a lightweight solution to their problem.”

In the past decade, Kaman Composites Vermont has sought ways to make its manufacturing operations more efficient, Sharkey says. This has driven it to implement several lean initiatives, including standardized work, 5S system, visual controls and kaizens to improve plant layout.

“That’s an ongoing journey,” he admits, but notes that the work has steadily paid off. “We’ve seen a 30 percent [increase in efficiency] over the last 10 years.”

Efficiency Vermont looks for ways to maximize efficiency in energy use. “[It] is financed from the utility bills in the state of Vermont,” Sharkey adds.

Kaman Composites Vermont is at work on a project to recover heat from its autoclave and heat the rest of its facility, Sharkey says. Currently, the heat is vented to a cooling tower. Recovery of tooling tower heat will save ten of thousands of dollars and the company expects this to be implemented during 2013.

A veteran of the composites industry, Sharkey joined Courtaulds in the United Kingdom in 1987 before coming to Kaman Composites Vermont in 1990. He is proud of the firm’s success.

When the company’s management bought it from Courtaulds in 1996, “The potential at that time was that the company could close,” he admits. Instead, the opposite happened.

“We were able to take the company – which then had 70 people – [and grow it],” he says. “That’s been one of the satisfying things to see. The company stayed in this community and grew.”

As Kaman Composites Vermont has grown, it also has encountered industry changes, Sharkey admits. For instance, while demand from its medical industry clients has softened, the commercial aerospace industry is poised to grow rapidly, driven by the commercial airline markets, he predicts.

“That’s where we see our expansion,” he says, noting that the company expects to add new clients and new programs. “That will be helped by having the bigger company behind [us].”

According to Kaman Corp., it was founded in 1945 and has become a world-leading innovator in aviation and one of the largest industrial distributors and systems consultants in the country.The company also strives to take part in its communities. “We are strong supporters of education, including meritorious children of our employees, students pursuing engineering degrees, museums with educational programs and various local educational programs across the country,” it says. “We also support charitable and civic organizations such as art councils, Boy and Girl Scouts, food pantries and health organizations.”