Back to Profile Gallery > Kettle Creations 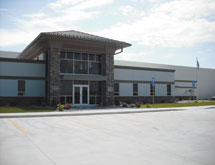 Kettle Creations may be a new name in the food production industry, but its owners are hardly novices when it comes to running a successful operation.

The company formed in 2008 and started operations in 2009 with the opening of a 100,000-square-foot manufacturing facility in Lima, Ohio, but has origins dating back to 1966. “We’ve been in the food business a long time, and even though we’re a new company, we’re seasoned,” says John Klausing, one of the company’s  partners. Other partners include his brothers Don and Dave and sister Nancy, who work at the company.

Klausing’s experience comes from his father, Ron, who founded a food manufacturing and distribution facility along with partner Jim Illig in 1966. The company – I&K Distributors – initially sold food products to local stores before they began producing their own products, which included fresh salads sold under the brand name Yoder’s.

“We grew up in manufacturing, and worked shifts in the summer while going to college,” John Klausing says. John and Don Klausing joined the family business in 1985, helping to manage I&K Distributors until the company sold to Lufthansa Airlines. The Klausings decided to form their own venture in 2008, beginning with a product they worked with at the prior family business – fresh mashed potatoes.

Kettle Creations produces fresh mashed potatoes for clients. All of its work is for private labeling.

Kettle Creations takes a culinary approach to developing new products. All new recipes start with a staff chef, who tries out different combinations of flavors before presenting them for consideration.

“We make sure all our recipes can be produced and duplicated at home exactly the way they are made in our kitchen, and make sure the quality we have here is exactly the same as you’d get at home,” Klausing explains. “It’s amazing what they come up with, sometimes.”

The company packages products in 16- and 32-ounce trays and bowls that are microwave and dual-oven safe, as well as a 5-pound, institutional-sized, cook-in-bag pouches.

“We built this facility from the ground up,” Klausing says. “It’s a highly efficient facility that can generate a great product.”

A second production line started operations in late 2011. The line, which represents an $8.5 million investment by the company, produces rice dishes and sauces.

A Focus on Quality

While the current state of the economy seems an unlikely time for such investments, Klausing says the company’s diversification and focus on quality keeps it a sought-after producer. The company recorded $16 million in sales following its first full year in production, a figure it stands to double this year.

“I think with the food industry, as long as you make a good-quality food that is cost-competitive, you’ll keep busy,” Klausing observes.

Kettle Creations offers customers what it calls a “cost-plus” structure, where clients have the ability to determine the quality of the raw ingredients it wants used in its final products. This allows customers to leverage their buying power to secure a higher quality product.

“We estimate potatoes costing about so much a pound,” Klausing says. “If customers want higher quality potatoes we’re OK with that, because our cost fluctuates based on that. If you don’t have good raw materials, you won’t have a good product.”

Kettle Creations ensures quality in part through a “first in, first out” inventory system that allows production person to keep track of when raw materials are received. The company’s entire inventory rotates at least two-and-a-half times monthly.

The company’s mashed potato production line includes cleaning, peeling, dicing and cooking functions before the potatoes go into a mixing room, where they are combined with other ingredients as needed before being packaged.

“With the addition of the Lyco cooker we have the capability to manufacture rice, pasta and other items,” Klausing says. “This flexibility will allow us to serve our customers in a variety of ways and produce different products.”

Finished mashed potato products are kept chilled using a system that recycles water, which consumes less energy than standard chilling or freezing methods. Potatoes never are stored in a temperature below 32 degrees.

In addition to being part owners in the company, John Klausing and his siblings are closely involved in its day-to-day operations. Klausing serves as CFO and controller, and Dave Klausing acts as plant manager, while brother Don handles sales and sister Nancy is in charge of accounts payable. Two other partners, Keith Stoll and John Sarka, serve as COO and plant engineer, respectively.

The close family ties among the company’s executives are felt on the production floor. “We have a very close-knit atmosphere,” Klausing says. “We have 85 families counting on us to do well.”

Outside of the company, John Klausing maintains close connections with a number of community organizations including serving on a local school board and coaching youth baseball and high school golf teams, he adds.