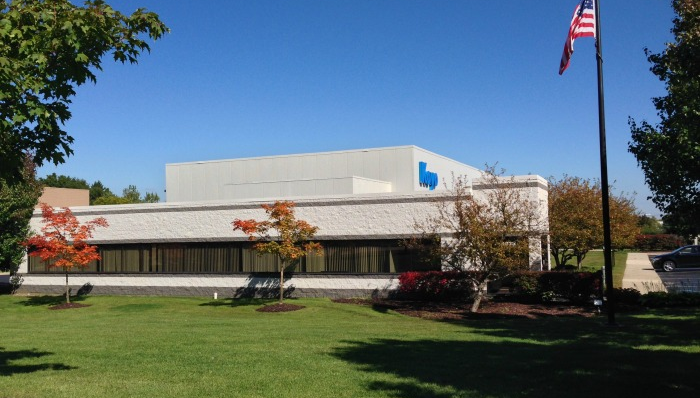 Koyo Machinery USA Inc. expected to generate positive interest in its newest products when it attended the International Manufacturing Technology Show (IMTS) in Chicago in September.

The attention the company and its latest grinding machines received at the event, however, far exceeded what it had anticipated. “We had many more guests at our booth than we expected,” says Jennifer Brozek, marketing and sales coordinator for the Plymouth, Mich.-based company. “A lot of people stopped by with specific grinding projects they wanted to discuss, while others wanted to see our [new] C6060 machine in action.

“We had students, engineers, CEOs and just about every type of person at our booth,” she adds. “It was nice to see our customers face-to-face, talk to them and meet a lot of new people in the industry.”

The C6060 machine also generated interest from IMTS TV, the event’s in-house broadcast, which interviewed Koyo Machinery USA General Manager Chris Clark about the machine. The C6060, which debuted during the IMTS, is one of only a few in the market capable of using large cubic boron nitride (CBN) grinding wheels. The company recently had been asked to add CBN wheels to its large centerless grinding line, an addition that resulted in its developing a brand-new machine with a surface speed of 80 meters per second.

The use of CBN wheels on the machine improves customer cycle times and wheel life while also reducing downtime and maintenance. The C6060 is also more economical than similar competitors machines, Clark notes.

In addition to the C6060, Koyo Machinery USA during IMTS also presented the KVD350 vertical double disc surface grinder, which the company displayed with its side access doors removed, allowing visitors to see its inner workings. The company’s KVD350 display included a loading and unloading demonstration courtesy of a robot provided by ACE Automation, Brozek notes.

Like the C6060 machine and the rest of Koyo Machinery’s product line, the KVD350 was developed in response to customer needs. The KVD350 also uses CBN wheels in its grinding process. “Many of our customers are trying to improve their use of floor space,” Clark says. “This machine has a small physical footprint, but is capable of grinding parts at a larger diameter than similar-sized surface grinders offered by our competitors.

The KVD350 is already in use in manufacturing plants in the United States and Japan. The machine is largely used to grind various kinds of parts used in fuel systems, drive trains and other major automotive components.

Koyo Machinery USA continues to follow up on inquiries received about both machines during IMTS. “IMTS went very well for us,” Clark adds.

About 90 percent of the tooling and machine components are built in-house at Koyo Japan, which also is where the product designs are created. The other 10 percent is automation components that are ordered from its suppliers.

The company this year expanded its service offerings when it added a spindle rebuild department to its ISO 9001:2008-certified facility in Plymouth. The department will mainly rebuild spindles from Koyo equipment, though it is also capable of rebuilding spindles from other manufacturers’ machines. “All of our spindles were being rebuilt by a vendor or sent to Japan,” Clark says. “We didn’t see any reason to keep sending those out when we can provide that service directly to our customers by bringing it in-house.”

Koyo Machinery USA will soon also add full machine rebuild capabilities to its services. Both new capabilities will require the company to hire additional technical staff. “This will give us more opportunity to allow us to grow,” he adds.

Working Together
In addition to adding new machines and capabilities, Koyo Machinery USA also is improving its operations by renovating its offices. The new office design will place managers and sales staff closer together in an effort to further open lines of communication, Clark says.

The company is also adding a demonstration area/showroom connected to the office area that will allow salespeople to show prospective customers what Koyo machines are capable of.

Clark says the new office layout will enhance the company’s already high level of teamwork. Employees in the Plymouth office each perform a number of different tasks; for example, Clark manages the office staff, goes on sales calls and travels to Japan for machine runoffs. “I’m most proud of how we work together here; almost every employee here has to wear multiple hats,” he says. “We all believe in getting the job done.”