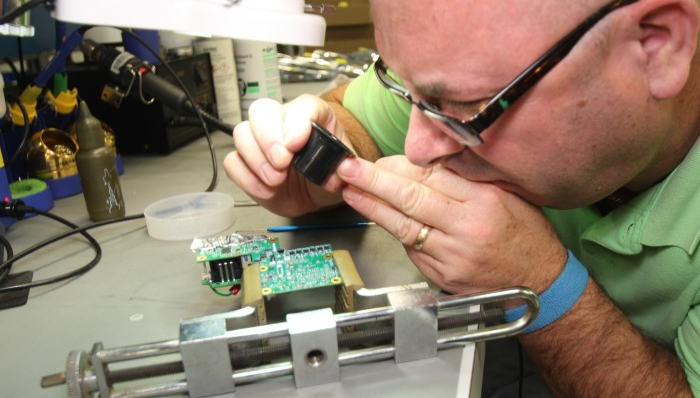 Kyntronics designs, engineers and manufactures actuation systems used in the medical, aerospace, industrial and other markets. Its customers include OEMs as well as distributors and end users.

Ahead of the Market
The company’s products include electro-hydraulic actuators (EHA). “These are products that nobody else in the world is making,” Richter says, noting the EHA products have a number of features that are unique in the industry.

Kyntronics’ EHA systems are designed with efficiency, precision control, connectivity and power density in mind. “We combined hydraulic and electric technology as well as controls into a single unit that users can simply take out of the box, connect wires and be up and running,” he adds.

The company also manufactures electro-mechanical actuators (EMA) that are used in applications requiring precise operation and connectivity within the overall system.

Kyntronics has designed the option of using power line communications into all of its actuator products and electronic I/O devices. Kyntronics’ patented C-Bus power line communication system uses just two wires to connect up to 32 actuators across a network. This makes connecting actuators simple, cost-effective, easier to operate and synchronize and also saves space, the company says.

The company continually invests in new product development, including finding ways to make lower-cost actuators. “Our goal is to provide feature-rich actuation products at lower price points compared with alternative products and technologies. When an OEM asks us for something that will save them on costs, we want to be able to provide that,” Richter says. 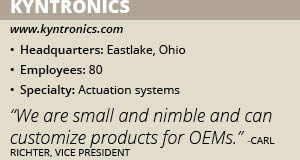 Meeting Needs
Kyntronics developed the C-Bus system to address the problem of getting multiple actuators to “talk” without the need for expensive and excessive infrastructure, which many of its customers had faced.

In addition to its standard lines of EHA and EMA products – which were developed in large part in response to meet customer needs – the company also produces limited run or one-off actuators. “We are small and nimble and can customize products for OEMs,” Richter says. “If an OEM goes to a larger manufacturer and asks for a special actuator, they would likely be told it couldn’t be done.

“We specialize in manufacturing actuators that OEMs can use to distinguish themselves in the market,” he adds. “We pride ourselves on listening to what the OEM’s needs are and jointly developing a solution with them.”

One of Kyntronics’ customers in the medical sector approached the company about developing a light-weight EMA for a machine used in post-operative physical therapy by knee replacement patients. “Our R2400 Rotary EMA system brought portability, special sequencing and control features to the knee therapy machine,” the company says. “Now, it is more marketable as a product for home therapy and to orthopedic surgeons.”

Kyntronics’ EMA replaced several components in the machine including a large motor, gearbox, variable frequency drive and related wiring and brackets. This reduced the machine’s cost and size. The EMA weighs 8 pounds, considerably less than the 80 pounds of components it replaced, allowing the machine to be portable, Richter says.

The Kyntronics system also includes real-time communication components, which allow patients and therapists to adjust settings. The R2400 EMA also included modified software and a communications interface that met the OEM’s system requirements. “By developing this solution, we helped improve the outcomes of people recovering from knee surgery,” he adds.

The company applied similar EHA technology to the patient couch portion of a medical imaging machine. “When the OEM needed a high-force, small actuator that operated very quietly, Kyntronics partnered with them to customize an EHA that is quiet, compact and can move large forces,” the company says. “The OEM needed a linear actuator that could move 4,000 pounds of force while using the existing infrastructure of the patient couch. The EHA needed to be properly adapted.”

Kyntronics modified its standard EHA to make it fit the available space as well as providing a very quiet solution. “Other electro-mechanical actuators were much noisier when operating and could not meet the OEM’s product specification,” it adds. “The quiet operation of the new couch has created a competitive advantage and is opening up new market opportunities for this OEM.”

Improving Production
Kyntronics manufactures products in a 40,000-square-foot facility in Eastlake Ohio. Kyntronics regularly operates its equipment on a “lights out” basis, which involves operating machines unattended during an evening or weekend. Most of the company’s standard product modules are produced in this fashion.

Kyntronics is working to reduce the amount of time it takes to deliver its standard and custom products to customers. “Our EHA product is relatively new, so as of now we’re delivering at a lead time of between 6 to 8 weeks,” Richter says. “We’re trying to get that down to a few weeks and, eventually, just a matter of days.”

One way the company hopes to improve its lead times is by designing products that are modular in nature. Kyntronics stocks modules of various sizes based on its common customer requests and then assembles products to customer specifications using those modules. “We want to design and deliver our products quickly, and be best in class in lead time,” he adds.

Kyntronics’ suppliers play an important role in the company’s ability to deliver on time. “It is very important that we have primary suppliers and backup suppliers for key components,” Richter says. The company also negotiates long-term agreements with several of its key suppliers to lock in pricing and manage lead times.

High Quality
The company’s lead time improvements reflect its overall corporate focus on quality and continuous improvement. “Our definition of quality is to exceed our customers’ expectations,” Richter says. “If our customer provides us with specifications on loads and speeds, we make sure we deliver a product that works right out of the box with no maintenance issues, on time or before they expect it.”

Kyntronics uses a variety of lean manufacturing principles in its operations including Six Sigma and one-piece flow. The company conducts monthly quality and productivity audits, and is AS9100 and ISO-9001 certified.

Each of the company’s actuators is tested on site to ensure it meets specifications. “After we build it, we perform an acceptance test procedure on each and every actuator that ships out of here to ensure quality,” Richter says.