Back to Profile Gallery > Lacks Enterprises 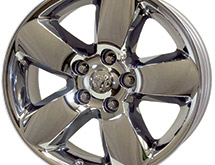 The technology used in the automotive industry has come a long way since the earliest days of Henry Ford, and it continues to advance by leaps and bounds even now in the 21st century. For more than 50 years, Lacks Enterprises has been at the forefront of technology in the manufacturing of components for automakers, and Vice President Larry O’Toole says this is the reason why the company has become a trusted supplier to the world’s largest automakers. “We basically try to focus on the future as opposed to what other companies do,” he says.

Lacks Enterprises specializes in components including wheels, wheel trim, and interior and exterior trim. The company was founded in 1961 by father-and-son team John P. Lacks and Richard Lacks. The company originally concentrated on basic machining, but soon it added metal finishing and decorative painting capabilities. Today, the company has more than 20 facilities throughout North America and Europe serving some of the largest automotive OEMs in the world, primarily the “Big Three” Detroit automakers. O’Toole says the nature of the company’s products are such that the company finds itself selling to wheel manufacturers as well as vehicle OEMs.

Even though the competition in the automotive market is fierce, Lacks Enterprises brings its customers solutions to their needs in the form of innovative and forward-thinking products. Not only does the company anticipate continuing to serve its existing customers this way, but it also expects to continue gaining marketshare in the future. “A lot of what we’re trying to do is branch out to other customers that we haven’t been with in the past,” O’Toole says.

Lacks Enterprises’ strongest advantage is its technology, and the most prominent example of this is in the company’s wheels. General Manager James Ardern says the company’s concentration on lightweight, premium finished wheels has become more valuable today as OEMs look for ways to reduce the overall weight of their vehicles for fuel efficiency as well as to include more amenities.

For example, the company’s eVOLVE™ hybrid composite wheels reduce weight while also providing enhanced aerodynamics for even greater fuel economy savings. Lacks Enterprises’ Chromtec® wheels offer superior durability when compared to traditional chrome-plated wheels thanks to the high-impact composite materials used in their construction, and can reduce the weight of a vehicle by up to 40 pounds.

“So not only can they save weight and get better fuel efficiency, but they get a premium finish,” President Nick Hrnyak says, adding that OEMs have a mandate to reduce the weight of their vehicles but don’t want to skimp on looks. “We see that as the fastest-growing, highest-momentum side of our business.”

Innovations such as these are made possible through Lacks Enterprises’ extensive investment in R&D, including dedicated labs for electrochemistry and organic coatings. Hrnyak says that with centralized facilities in the USA, the company is in a unique position to draw upon the expertise of multiple sites with exceptional flexibility. “We can move our technical mass to any challenge or opportunity that we have, instantly,” Hrnyak says.

In addition to its innovative and lightweight wheels, Lacks Enterprises also offers OEMs a full line of exterior and interior trim products, including grills and interior trim. The company has been an innovator on this side of the business, as well, introducing High-Impact Plated Plastic,  Platinum and Iridium Chrome, a proprietary electroplating process that creates a smooth, matte finish. O’Toole adds that the broad selection of finishes Lacks Enterprises is capable of producing means it can match different parts on the vehicle to harmonize the vehicle in total.

O’Toole says Lacks Enterprises continues to make inroads into new areas of the market through new products and introducing itself to new OEMs, but even though its products are innovative the company understands that manufacturers can be slow to adopt new ideas. “When you’re the leader in a category, you’re setting the pace, but it’s a lot of work to change the marketplace,” Hrnyak says.

“Ours is a very long-term sale, and it’s not something they grasp right away,” O’Toole adds.

Nevertheless, the innovations Lacks Enterprises has introduced have brought with them a lot of growth for the company, especially in areas such as plastic plating. The company has started working with manufacturers outside of the “Big Three” like, Toyota,  Nissan, Audi,  Mercedes and Volkswagen, and O’Toole says the company is confident that its lightweight and advanced products will be the answer that more OEMs will be looking for in the future. With the capabilities it has, he says, Lacks Enterprises can provide that answer.

“Now I think we’ve got the right story for the next 10 years,” he says.