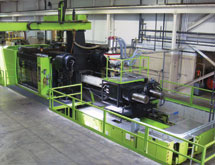 When many suppliers to the automotive industry were going out of business during the recession that nearly crippled the sector in 2008 and 2009, Lakeside Plastics Ltd. stood firm. Rather than scale back its operations, the manufacturer reinforced its commitment to the world’s largest automotive manufacturer at a time it most needed the support.

“We decided during the economic downturn to strategically focus on General Motors, and become their best and lowest-cost supplier,” says Robert Echlin, the President of the Windsor, Ontario-based plastic injection molding company. “We gave them what they were looking for from a supplier during a tumultuous time, and stepped up to the plate to support them and be a supplier they want to work with.”

Lakeside Plastics produces molded plastic parts and component assemblies used in both the interior and exterior of several vehicle models, such as the Chevrolet Impala and Malibu and the Buick Verano. These include interior garnish moldings such as pillar assemblies that contain speakers, sound insulators, lighting and related componentry.

Lakeside Plastics’ focus on producing best-in-class products with best-in-class people and equipment has driven the company to be a low-cost and high-quality producer for GM and made it one of the automaker’s go-to suppliers. As an example of its service to GM, Echlin notes it took on additional manufacturing responsibilities for the company during the height of the recession in 2009. Lakeside absorbed 16 tools and assembly processes after the bankruptcy of one of GM’s plastic suppliers, and within two weeks was able to support the volume of components needed for one of GM’s highest volume vehicles, he notes.

GM represents the majority of Lakeside Plastics’ customer base. Other customers include Johnson Controls, which also awarded the company with major honors in 2008, 2009, 2010 and 2011.

Echlin, who joined the company in August 2012, says he is working to diversify Lakeside Plastics’ customer base. This includes serving other automotive OEMs as well as customers in other industries. The 35-year-old company is TS16949 accredited.

Lakeside Plastics operates 45 molding machines ranging from 20 to 3,500 tons of clamping pressure. These machines are capable of a number of functions including insert molding, laminate molding, sequential valve gate molding and prototype creation. The company typically performs 10 to 20 mold and color changes a day to accommodate the manufacturing of different types and sizes of parts, Echlin says. Other manufacturing capabilities include secondary assembly services such as heat staking, sonic welding, robotic edge-wrapping, insert molding and in-mold fabric wrapping.

The company uses a number of robotic devices to automate its processes, which allows for consistent demolding times and streamlined machine processes. All of the company’s machines are unified by a shop floor monitoring system produced by Mattec Ltd. Computers monitor every machine, giving manufacturing employees the ability to check productivity and quality in real time. The Mattec system is integrated to the ERP software system produced by Solarsoft Business Systems. “This is a very dynamic system that allows us to go to the next level in terms of quality and productivity,” Echlin says.

The Solarsoft ERP system also helps the company manage its inventory, which Echlin says is maintained on a just-in-time basis. Both incoming components and outgoing finished parts are kept in inventory for the absolute minimum time, he adds.

Lakeside Plastics’ expects its vendors to maintain the same high quality standards as it does. The company has processes in place such as performance metrics to monitor and encourage the continuous development of its supply base. Suppliers are also held to the same containment and nonconformance reporting standards as Lakeside itself, Echlin says.

High quality standards and lean manufacturing principles are central to Lakeside Plastics’ internal operations. New employees must pass a battery of tests including a manual dexterity test prior to their hiring. After being hired, they go through an extensive orientation process followed by four weeks of on-the-job training where they are paired with a company trainer.

All employees receive ongoing training and continual reinforcement, part of which is accomplished through a frequently benchmarked internal newsletter that has been produced and distributed daily for 17 years.

“The thing that makes me most proud here is our people and the incredible culture that we have,” Echlin stresses. “We have a focus on continuous improvement, getting our work done quickly and correctly and going above and beyond customer requirements.” mt