Back to Profile Gallery > Lawrence Equipment 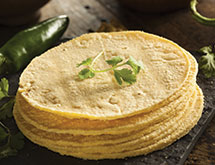 The tortilla dates back to as early as 10,000 B.C., and has remained more or less the same since that time. Although the basic concept and recipe behind the tortilla have stayed constant over the years, that doesn’t mean that Lawrence Equipment hasn’t stopped looking for ways to improve on the process of making them.

As the premier manufacturer of equipment used to make tortillas and other flatbread products throughout the United States and Europe, Lawrence Equipment understands the need its customers have to streamline their processes and improve the overall quality of their products, and owner John Lawrence says the company lives on the cutting-edge of the industry.

“Education and investment are big things,” Lawrence says. “Invest in your people and invest in equipment.” That has been the mantra of Lawrence Equipment since it was founded in 1981. Lawrence started his career working for a machinery manufacturer, and in the late 1970s he encountered a company based in Chicago that produced tortilla presses. Lawrence was so impressed by the equipment that he began selling them for another manufacturer, and eventually parlayed that experience and knowledge into establishing Lawrence Equipment with his wife. The South El Monte, Calif.-based company specializes today in manufacturing all of the equipment needed to produce tortillas, pizza crusts and other flatbread-related products.

At the core of the company’s success over the years has been its unwavering dedication to innovation and developing new solutions for its customers. Through continual investment in its people and equipment, Lawrence says, Lawrence Equipment continues to remain the most sought-after provider of flatbread equipment solutions in the industry for wholesale, bakery and supermarket customers.

Lawrence Equipment demonstrates its commitment to developing the most advanced, state-of-the-art equipment on the market by continually investing in new equipment in its own facility. Lawrence says the company has made numerous upgrades to its ISO 9000-certified manufacturing facility over the last several years. For example, the company recently installed its 40th CNC machine and boasts numerous water jet cutters on its production floor. Lawrence says the company is in the midst of installing another half-dozen new machines right now and expects to have many more in place by the end of the year. “We’re moving right along,” he says.

Lawrence Equipment stands apart from other manufacturers serving the same customer base because those manufacturers rarely consider the long-term development of new products to be a high priority, according to Lawrence. On the other hand, Lawrence Equipment is always working on new ways to improve its products to in turn improve its customers’ processes, and the company holds numerous patents as a result of this commitment.

Lawrence says by investing heavily in developing equipment that is as automated as possible, Lawrence Equipment creates greater efficiency for its customers and helps them keep their production costs low. “We’ve got the better lead-time between concept and collecting the money,” Lawrence says.

Lawrence Equipment backs up its equipment after the sale, as well, and Lawrence says this is another area in which the company sets itself apart from its competition. The company’s service department has 20 dedicated service technicians ready to come to customers’ aid at a moment’s notice, and Lawrence says this gives customers greater confidence in the equipment. “Our manufacturing business is successful because our service is very good,” he says.

Lawrence Equipment also believes in investing in its people. Lawrence says many manufacturers today don’t spend much money on training. Compounding the problem is the fact that the next generation of students hasn’t taken to the engineering and science fields as much as previous generations.

Because Lawrence Equipment is concerned about the next generation, the company has partnered with local high schools to develop programs designed to make kids more interested in STEM subjects. Additionally, the company has brought in interns to give more young people hands-on experience in the industry and hopefully stimulate greater interest.

As long as the next generation of leadership demonstrates the same level of commitment to quality and efficiency, Lawrence says, Lawrence Equipment stands ready to hold onto its dominant position in the marketplace for many years to come.