Down to the wire

Driven by sustained demand for its specialist silver and nickel plated wire and strands, LEONI Temco Ltd enjoyed a highly profitable year in 2017, one that it plans to build upon in the yhears to come

For LEONI Temco, 2017 was an interesting year, and one of its best in terms of business performance and turnover in recent times. “I think the global markets, particularly the megatrends in both the automotive and aerospace sectors, helped influence the growth we experienced last year. For many, 2017 was the first time that they had seen a clear, positive difference in conditions since the recession days of almost ten years ago, and we are fortunate to be well placed within these markets,” LEONI Temco’s Managing Director, Brian Cutts begins. “At the same time, the devaluation of the pound has helped make us more attractive to our customers and we have successfully managed to the follow the British GDP 12 per cent manufacturing level, which grew by around 2.7 per cent in the previous 12 months.”

Part of the wider LEONI group, LEONI Temco is a specialist manufacturer of silver and nickel plated wire and strands for distribution to cable makers across Europe, with additional specialties coming in the form of its range of alloy wire products. Its customers can be found in a number of key sectors, including automotive, aerospace, industrial solutions and telecommunication. “The bumper year we experienced in 2017 was driven, in large part by the major German automotive manufacturers, including the likes of VW, Audi, Mercedes and BMW, and it is to their respective automotive cable makers and OEMs that our products are sold to,” Brian adds. 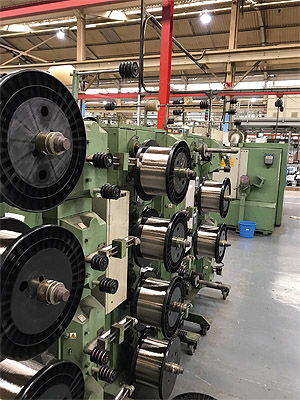 In the years prior to 2017, the company had set the stage for the pick-up in work that it came to experience by investing in processes and systems for capacity growth in the event of a sudden ramp up in production. This turned out to be a wise move, considering the influx in work that it faced in the first quarter of last year. “One of the things we already had in place was a structure of shift patterns that allow for the effective running of our facilities 24 hours a day, six days a week,” Brian explains. “As well as the standard Monday-to-Friday shift structure, we also have a small team that work 12 hour shifts dealing with bottleneck processes.

“In addition to this, we have invested in Overall Equipment Effectiveness (OEE) and Enterprise Resource Planning (ERP) systems to improve efficiencies throughout the business, aid general performance and improve our bottleneck processes to allow us to run unmanned for up to 24 hours. These efforts have also helped to improve our mean times between failures (MTBF) and mean time to repair (MTTR) of our manufacturing equipment and key systems, and we have dedicated people in place carrying out preventative maintenance on a daily basis. When synchronised, these different processes allow us, much like a Formula 1 team, to keep bottlenecks running constantly, at LEONI Temco we believe that proactive maintenance is better than reactive and value this approach within our working shift/day/month in all business areas.”

By the fourth quarter of last year, LEONI Temco was, as Brian aptly describes it, “running like a train” and perfectly positioned to handle the level of capacity being thrown at the company. Now, several months into 2018, that peak has subsided slightly, however order intake remains very positive. “Last year we exceeded all of our targets and early signs are that we are already performing better than at this time in 2017 in terms of profitability,” he says. “We are now in a position where we can also prepare ourselves for a potential influx in work to follow in the coming months, particularly in the aftermath of the Wire 2018 show that is occurring in Düsseldorf from April 16-20, where you will be able to find us in Hall 11, stand A40.”

When we spoke with Brian, the company was in the midst of its push to transition to the 2015 standards in environmental controls and quality. As a matter of fact, the day prior to our conversation LEONI Temco had officially passed its environmental audit, and on the day itself auditors were on site completing its quality audit. Ongoing in the background, meanwhile, are efforts to drive the business further forward, and this is being done by working to set up global alliances with its colleagues in the United States and China, and by looking at ways to better target the lucrative aerospace market. Even further down the line, the company is also aware of the potential applications its nickel plated wire and associated products could have when it comes to autonomous vehicles and E mobility.

Operating against the backdrop of a UK market that is still processing the potential impact of the vote to leave the European Union (EU) in 2016, LEONI Temco has been exploring how this might impact it, especially considering that as much as 70 per cent of its business is currently EU focused. “In addition to mapping out our supply and customer chains, which is something that is ongoing at present, we are always looking to identify as much UK and non-EU business as possible,” Brian states.

Whatever the eventual outcome of the UK’s withdrawal from the EU, it will remain the home of LEONI Temco and it is with this in mind that the company has one further challenge that it is working diligently to address. “We recognise that there is something of a skills shortage here in the UK, which is one of the reasons why we continue to put such a strong emphasis on investing in our people,” Brian proudly proclaims. “In 2017, we recruited several new apprentices, and we are constantly looking at ways to develop our staff in terms of their current and future functions. LEONI Temco has a strong history of taking people through the business into management positions and this is something that we have every intention of continuing to do throughout 2018, and beyond.”