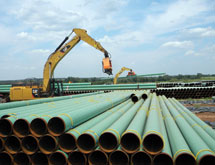 For a modestly sized operation, Lift Technologies shows an amazing amount of strength. Founded in 2005 by David and Jennifer Black, the company perfected a technology that employs the use of vacuum suction to move large-diameter piping. Lift Technologies has created the LT30, a vacuum lifter that can accommodate pipe joints ranging in diameter from 6 to 48 inches.

In addition, it can handle materials ranging from steel and concrete to plastic. This vacuum lift technology, originally developed in Australia, was brought to U.S. markets in 2000.

Used as an attachment to an excavator or crane , the LT30 combines a diesel engine with a high-volume vacuum pump and a heavy-duty lifting pad. When the device is activated, the pad creates a vacuum seal on the pipe with enough suction to lift and carry it. Not only can the device lift the pipe joint, the joint can be turned 90 degrees and carried to a drop-off point.

“Our clients are companies that need to move joints of pipe, whether [they’re] a gas, oil, utilities, pipe manufacturers or logistics companies that have to transport pipe,” David Black says.

The device is typically used with an excavator because this equipment already has a hydraulic system built in to use with the LT30. In addition, excavators are normally a standard piece of equipment that most of the company’s clients already have, or they’re easy to rent on short notice.  However, Lift Technologies has also adapted the LT30 for use with cranes by developing a hydraulic power unit used to turn the device and material.

One such application was for an operation that had to transfer large pipe joints from Mississippi River barges to rail cars. Prior to implementing the LT30, Jennifer Black says a crane was used to lift the pipe, then ground crews would have to ride out to the barge and climb in to secure ropes with hooks around the pipe. To move the pipe into the correct position to be inspected and loaded onto trucks, eight ground crew people would have to hold the ropes and turn the pipe manually 90 degrees.

“Not only was this a slow, difficult process, it also posed a danger to the ground crews,” Jennifer Black says. “With the old method, they looked like the ancient Egyptians building pyramids.” Using the LT30, crews were able to triple their output, from moving 30 to 40 lengths of pipe per day to moving 100 to 120 per day. Additionally, the device eliminates the need for ground crew members to turn the pipes manually, keeping them out of harm’s way.

One crew member, using a radio-control from the safety of his or her crane cab, can pick up the pipe joint from the barge, turn it 90 degrees and carry it 300 feet before depositing it in the rail car. Even in windy conditions, David Black says the LT30 is safer because the vacuum suction is so powerful.

The vacuum system features two parts: a vacuum lifter and shoe or vacuum cup that is crafted with a rubber seal. It is this rubber seal and suction power created by the hydraulic system that creates such a tight seal that it can secure and transport a joint that weighs up to 30,000 pounds. Additionally, the system can be adapted to move plating. “Basically anything that has enough surface area to form and maintain an air-tight seal is great for this system,” Jennifer Black says.

The LT30 also reduces the amount of damage to the pipes themselves. Because the rubber seal is the only part touching the pipe, the LT30 will not scratch it. In turn, Jennifer Black says, this can potentially increase the life of the pipe because the integrity of the pipe is maintained, which can slow corrosion when the pipe is in use.

“Though there are other companies that offer this type of device, the LT30 is, by far, the most durable on the market,” David Black claims. “The typical lifespan of an LT30 is about 10,000 hours – in our experience the lifespan of our competitors’ devices are about 2,500 hours.” The unit itself is made of industrial-grade components to ensure reliable operation for several thousand hours.

The LT30 is rated to operate  down to -40 F, which proved invaluable when one of the company’s clients operated a unit during an extremely harsh winter in Alberta, Canada. David Black claims it was the only unit in the company’s operation that was continually operating properly.

David Black says because he’s sensitive to the needs of his clients,  who mostly rely on bid work, he designed the LT30 to reduce operating costs and downtime. “A single day with equipment out of service can cost some operations thousands,” he says. “I’m proud to say that over the seven years our company has been manufacturing these products, all of them, so far, are still out in the field doing their jobs.”

Also, because cycle times are reduced, it increases the client’s bottom line. “Most of our customers shoot for about a minute per lift,” David Black boasts. “Some can lift 100,000 joints in a year.”

Adaptability is also a key selling point of the LT30’s superior design.  Although David Black and his team will create a shoe to match the specific characteristics of the material being moved, the basic design remains consistent for each device.

The diesel engine and pump are modularly designed and fitted on a base. If emission requirement upgrades are needed or an engine needs to be replaced or serviced due to wear, simple disconnections are required and the new part can be quickly added and connected.

David Black says an engine can be removed and replaced with a new one within 30 minutes.

“Part of the reason we’ve been successful is because we offer units with interchangeable parts,” David Black says. “We’ve used the same engine class, vacuum pump and major components for the seven years we’ve been in business, so we have any replacement parts our clients need readily available.” He adds that the LT30’s design allows clients to service their own equipment.

“Because these units are made with standard parts, I can, many times, talk them through a service procedure over the phone with parts they can obtain from a local auto parts dealer,” David Black says. “Although we try to help our clients become self-sufficient regarding service needs, we will also repair parts at our facility or ship parts where they’re needed.”

Establishing good client relationships and offering good customer service have been key elements to Lift Technology’s success. “We try to develop a relationship with our customers,” Jennifer Black says. “We feel that their success is our success, too.”