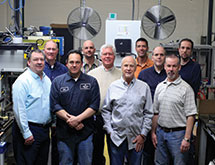 For Loc Performance Products Inc., the name of the game has been vertical integration, President Lou Burr says. “Over the long term, that has been the backbone of the company’s success,” he declares. “We are routinely adding new capabilities so we can offer our customers more.”

For instance, if there are manufacturing processes that Loc Performance does not have but needs to support a contract, “We’ll bring [them] in-house,” he says. “We do a variety of manufacturing operations, [which are unique] for a company of this size.”

Based in Plymouth, Mich., the company is a full-service manufacturer of large CNC-machined components and assemblies for military and commercial applications. Founder Victor Vojcek started Loc Performance in 1971, in a 5,000-square-foot facility.

There, the company manufactured machined components for automotive power trains, including products for NASCAR and private teams in the drag racing industry. Over time, Loc Performance grew its customer base and built a 265,000-square-foot location in Plymouth.

In the 1980s, the company moved away from the automotive market and began serving the defense industry, where it became the preferred supplier for tracked vehicle suspension systems. Five years later, Loc Performance was the first small business to win a multi-year, multimillion-dollar contract for M-1 Abrams final drives.

In 2009, 90 percent of the company’s sales were tied to the U.S. Army’s fleet of combat vehicles. Since that time, Loc has been diversifying into new commercial markets while continuing to add capability. Traditionally a build to print manufacturer, Loc now has full product development capabilities and can support products throughout their entire lifecycle. Loc also has several dynamometers custom build to test a variety of gearbox systems designed by Loc Performance.

On the commercial side, “We’ve landed customers that include Caterpillar and General Electric, which is mostly for mining and locomotive applications,” Burr says. “We don’t do anything automotive today.” Today, sales are split nearly 50/50 between commercial and defense customers.

Loc Performance recently won a contract for a large military program valued at $161 million to restore lost mobility to Bradley Fighting Vehicles (BFVs). “They will regain mobility lost from added-on armor and weapons during the Iraq and Afghanistan wars,” Burr says.

This contract provides for Engineering Change Proposal (ECP-1) vehicle modifications, through the installation of Track Kits, Shock Absorber Kits, Vehicle Suspension Support System Kits and Heavy Weight Torsion Bar Kits. The project will “more than double the size of the company over the next two years,” Burr says.

This includes increasing its staff. Loc Performance currently employs 180 people, “But we’re in the process of hiring 50 more,” he says.

Typically, Burr says, a project like this is sole-sourced to OEMs. However, the U.S. government has issued new acquisition guidelines, including increasing competition and small business participation. “We never would have won this new contract if the Army wasn’t doing things differently,” he says.

The state of Michigan recently awarded Loc Performance a $400,000 grant for employee training, Burr says. “We’ve committed to hiring 95 employees during the next five years as part of that,” he says.

The funds, he notes, will be used to start a CNC training program for machinists. “There is a shortage of CNC machinists and we’ve got to train our people in-house,” he says. “To do that ourselves, we set up this program.”

But the company’s training will not be limited to CNC machining, Burr notes. “Next year, at least two individuals also are going to become black belts in Six Sigma,” he states.

Burr joined Loc Performance in 2007 after working in the automotive and banking industries. He is proud of the company and its reputation as “the sole source for the Army in terms of the M1 final drives,” he says. “We’ve been doing it for over 20 years.”

He also praises its vendors, which include Keokuk Steel Castings Co., Loc Performance’s preferred foundry for castings with military applications. “They definitely are a long-term, strategic supplier to us as it relates to our military business,” Burr says.

“Despite military spending being at relatively low levels, I anticipate Loc continuing to grow in the military market,” he says. “We’ll continue to expand and diversify into more commercial markets as well.”