Back to Profile Gallery > Lockheed Martin 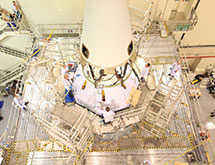 Manufacturers know that the only way to know for certain if something works is to put it to use. On Dec. 5, the world will be watched as NASA tested a project that has been almost 10 years in the making: Orion. NASA contracted Lockheed Martin in 2006 to develop a new-generation spacecraft to support lunar landing missions and supply runs to the international space station.

As the leading member of a team comprised of major subcontractors including Aerojet Rocketdyne, United Technologies Aerospace Systems and Honeywell, as well as an expansive network of minor subcontractors and small businesses in 45 states across the country, Lockheed Martin was pretty far along the project when it got the call from NASA to switch focus and set its gaze on deep space.

“So now our activity has been on developing a new, larger space vehicle capable of giving us the big push needed for deep space missions,” explains Bill Johns, Lockheed’s chief engineer for Orion. “Since 2010 we have been focused on this deep space variant and much more recently we are very focused on building and getting ready to fly Exploration Flight Test-1 [EFT-1], which is our first orbital flight that will gather the data we are looking for.”

Lockheed and NASA teamed up to design a four-person spacecraft capable of 21 consecutive days of space travel that can accommodate enough clothing, food and water to last them 21 days, as well as spaces to work and get exercise.

Oxygen was also a concern. The team designed a closed-loop life support system that captures air being breathed out. It dispels the carbon dioxide and moisture and recycles the oxygen and nitrogen back into the cabin, reducing the crew’s reliance on oxygen and nitrogen systems on board.

Another consideration was the design’s strength. For instance, Lockheed Martin manufactured the pressure vessel from lightweight aluminum lithium and using a technique called friction stir welding. The metal is stirred as opposed to being melted. As the metal parts mix together, it results in a reliable, lightweight joint that is more reliable against cracks and leakage. The design also has to withstand the extremely high temperatures and radiation it will come across on its descent back to earth, and this is the element that Lockheed will make a top priority in its testing.

On its flight test, Orion launched from a vehicle called Delta IV Heavy, the biggest rocket available today. It went into a low-earth orbit and orbited the earth once. At that point most spacecraft will prepare to descend, but Orion is looking to pioneer new frontier. After its first orbit, Orion shot 3,600 miles above the Earth. On the way up and on the way back down, Orion passed through the  an area of high radiation.

On its descent to earth, Orion reached a speed of 20,000 miles per hour, unavoidably compressing air ahead of the heat shield surface that reached 4,000 F because of the high speed. Once it entered the earth’s atmosphere, a set of specially created parachutes deployed, slowing Orion down to 20 miles per hour before it splashed down into the Pacific Ocean. EFT-1 will determine whether the Orion can withstand such a mission.

“We’ve designed a heat shield that is 16.5 feet in diameter and is the largest one ever built,” Johns says. “When it’s coming back at 20,000 miles per hour, things will get hot. Not only that, we have to protect future crew from temperatures like that and also from the landing loads of hitting the ocean.”

The heat shield is made of a coating called Avcoat, which burns away as it heats up in a process called ablation to prevent the transfer of extreme temperatures to the crew module. It is also covered with a silver reflective tape that protects the material from the extreme cold temperatures of space.Once it launched, the team began tracking 10 of the top-16 safety risks associated with deep space travel missions. Sensors and electronic systems provided information on the environment inside and surrounding Orion and how the spacecraft both influences and reacts to that environment.

“We are moving out briskly with the next production version and as soon as this data gets back we will bury ourselves in it and make sure we understand anything new it’s telling us,” Johns explains. “Any adjustments it indicates will be quickly incorporated into the design of the next spacecraft because the next spacecraft exploration is slated to go into beyond-lunar orbit on a much longer duration 20-day mission.”