With over 200 years of manufacturing experience, Mack Rides GmbH & Co KG represents a world leader in the development and production of amusement park rides

Founded in 1780, the German based Mack Rides is able to look back over a 236-year history as a family business with a strong heritage in the development and construction of amusement park rides and attractions. During its earliest history the company was involved in the construction of carriages and stagecoaches, before beginning its journey in the manufacture of 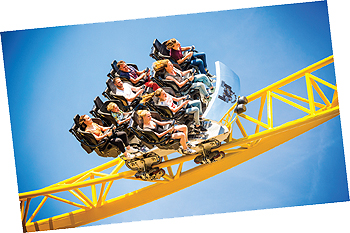 amusement park attractions through the development of saloon caravans for travelling showmen and circuses. Mack Rides began its first development of rides for funfairs, completing its first wooden rollercoaster in 1921 with the company continuing to grow as a leader in the field of attractions and rides over the subsequent years. “Using innovative new developments and customer-oriented ride construction, Mack Rides has always influenced the world of theme park rides like almost no other company,” explains Mack Rides Chief Officer Sales & Marketing, Thorsten Koebele. “The unique combination of being a ride manufacturer and park operator allows us to develop optimal solutions for our customers. It is exactly this uniqueness that builds the solid foundation of our areas of expertise, comprised of quality, reliability, durability, investment security and design.”

During its long history Mack Rides has played a key role in the development of some of the world’s most impressive and exciting theme park rides and attractions. Debuting at the Walibi Belgium theme park outside Brussels during spring 2016 for example, the $9 million ‘Pulsar’ represents the first PowerSplash water ride to be built by the company. “Pulsar is presently both exciting and refreshing the guests of Walibi Belgium. The first-of-its-kind ride lifts passengers some 150 feet above a lake before plummeting at 60 mph towards the water creating an impressive tidal splash,” Thorsten reveals. “Its large 20-seat boats are driven by a strong linear synchronous motor (LSM) and launches back and forth three times, until the final splash slows the boat down. Reaching heights of more than 35 metres, the PowerSplash is already a huge hit for Walibi.”

Mack Rides also worked with the Walibi Belgium sister park, Walibi Holland through the development of the ‘Lost Gravity’ BigDipper rollercoaster, which opened during March 2016. The rollercoaster features special newly-designed cars that allow passengers to feel as if they are flying over the track, with the outer seats of the eight-seat cars located next to the track without having a floor underneath. Lost Gravity was designed as a new thrill coaster for all of the youngsters visiting the Dutch theme park and due to the fact that the ride uses single cars, its is able to employ narrower turns and rapid transitions. Further notable openings during 2016 include the development of the Flash (aka Lightning) rollercoaster at the Lewa Adventure Park in Xi’an, China. “Standing 68 metres tall the Flash Hyper-Coaster simple cannot be missed when visitors enter the park,” Thorsten says. “After a spectacular first drop the ride the executes a rapid loop around the lift hill reaching a record-breaking height of just over 200 ft. The trains then rush at full speed over airtime hills and turns, as well as a heart-shaped roll. After an airtime filled first part of the ride the passengers experience quick transitions low to the ground before entering the station.” 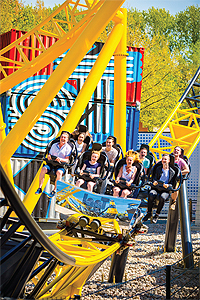 Operating from its single factory and headquarters in Waldkirch, Germany Mack Rides employs a full portfolio of equipment ranging from bending machines, robots and sandblasting machines to paint halls, with a further four hectares of space available for further development. The opening of a new internal logistics centre during 2013 has enabled the company to undertake the internal handling of materials much more quickly and efficiently, as well as to increase its logistic capacity for spare parts. In addition to its robust manufacturing capabilities, research and development (R&D) represents a vital component within Mack Rides for the design and production of exciting new rides. “The R&D is crucial to the success of our company and so we keep looking for new ideas on a daily basis. The industry demands new rides and world-firsts each and every year so the pressure to bring something new is always present,” Thorsten elaborates. “With three prototypes this year and a new ride system in 2017 we see a great future for the coming years, however we still need to supply many rides that are not prototypes and that keeps us busy as we continue to take orders for 2020 and even further in the future.”

Future designs include the delivery of a new rollercoaster at the UK’s Blackpool Pleasure Beach. This project will utilise the combined experience of the company’s long history, which will also prove vital as Mack Rides develops ever more adventurous designs over the coming years. “The launch of the coaster that is coming to Blackpool Pleasure Beach is a very challenging project as we are building it into the existing ride portfolio of Blackpool. Therefore we need to make sure that we calculate the crossings of each attraction by millimetres and the track is also extremely precise. With that much interaction with other rides the ride itself is getting even more fun. You can watch people on other rides passing by and cheering with you as you ride along, but the ride elements on the ride are also very surprising and the pacing is like a Formula One car driving through the busy city of Monte Carlo,” Thorsten concludes. “We have full order books for the upcoming two and a half years, so we are focusing on producing the Blackpool coaster and our other orders. Our new prototypes will open in 2017 year and are already in the making. We will see soon how the market and the fans of rollercoasters react to them.”