Back to Profile Gallery > Major Tool and Machine 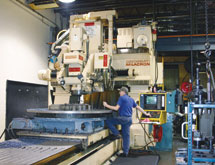 Major Tool & Machine’s customers look to the company to fill a variety of needs. “What we think we’re known for is our ability to take a large, complex design and manufacture it to exacting standards,” says Rick Wiegand, president of the Indianapolis-based company. “We like to take other people’s dreams and make them a reality.”

The company is capable of producing a wide range of custom components from rocket engine components to heavy equipment and off-road truck parts, radar structures and canisters used to store nuclear material. “We cover a very broad and wide range, but what all of the components and assemblies we produce have in common is that they require manufacturing, engineering, program management, machining, welding, assembly and testing – which are our core competencies,” he adds.

Major Tool & Machine’s capabilities have greatly expanded since its founding in 1946 as a custom job shop producing tooling and aircraft support equipment.

“We’ve grown through identifying new opportunities and bringing in the right people,” Wiegand says. “When the company started it was a 10- to 20-man shop in a 10,000-square-foot facility – it’s a different business today by far.”

Major Tool & Machine serves OEMs and others in the energy, aerospace and defense, nuclear and national laboratory and industrial markets. “We consider ourselves more of a service company than a product company,” Wiegand says. “We’re an agile, fast and responsive company that offers customers a component and/or assembly that is vital to their product.”

Clients include Caterpillar, Boeing, Oak Ridge National Laboratory, Alstom, ATK, Lockheed Martin and Raytheon. “Our vision is to be our customers’ premier supplier,” Chairman Steve Weyreter says. “We want customers to come to us first when they have needs that we can satisfy by providing world-class engineering, machining and fabrication services.”

Major Tool is also able to help customers design products for manufacturability. “We add value to customers early in the manufacturing process,” Vice Chairman Jim Flanagan notes. “Our engineers can help influence the design of custom parts so they’re producible at the lowest cost and with the shortest lead-time.”

A number of American Society of Mechanical Engineers certificates and the ability to meet other rigorous quality specifications give Major Tool & Machine qualifications to handle fabricating, machining, assembling and testing services for nuclear hardware.

Industrial applications for the company’s products include components for mining equipment, earth movers and gas well fracturing machines as well as amusement park ride components, such as for Disney’s Tower of Terror, and large bearing and gear housings, the company says.

The company’s diversification across multiple industries gives it the ability to maintain its bottom line despite the decline in a few of its sectors.

“One of our financial strategies is to always have an extremely strong balance sheet and be lightly leveraged,” he adds. “When one of our markets is down, we pursue equipment and investments in that area. We’re in very good financial shape and are able to make investments during times when we can get the best value from manufacturers.”

The company’s five divisions are:

Manufacturing equipment and facility investment is a high priority for the company across all its divisions. “We’ve recently invested heavily in new control technology for our machines,” Weyreter says, noting the company is implementing Siemens 840 controls as its standard. “This control is the most sophisticated, flexible and complete relative to five-axis machining and this standardization across our machines allows our programmers the ability to understand just one control and provides a common interface for our machinists, offering flexibility for machinists and programmers moving from one machine to the next.”

The Mazak machine also is equipped with a 120-tool magazine rack for storage as well as a heavy-duty, programmable tailstock.

This year represents the fifth year of a five-year machine and facility upgrade program on Major Tool & Machine’s campus. “Our goal is that we’ll have every machine re-built, our facility like new and add new machines, as needed, by the end of 2012,” Wiegand says.

Major Tool & Machine prides itself on its varied manufacturing capabilities as well as its longstanding supplier relationships. The company’s philosophy is that its suppliers are an extension of Major Tool itself, and there is no difference between a supplier and an internal work center. The company shares customer forecast information with vendors and regularly collaborates with them on product improvements, he adds.

CATIA V5 is used to manage digital mock-ups and simulations. TDM V4 software, used in tooling and tool crib management, allows users to access tooling information from a single database. This information is then pulled into CATIA, which increases efficiency by eliminating the need to enter redundant data.

The VERICUT software simulates CNC machining to detect errors, possible collisions and other inefficiencies. All of Major Tool & Machine’s machine tools are modeled and simulated within the software.

The company’s business management software functions are integrated within an ERP system the company has used and customized since 1996. Employees can access information such as drawings, inspection documents, welding procedures and other documentation electronically.

The company has the ability to write its own software source coding. “We have customized the ERP system to meet our needs and fit the business that we’re in. No off-the-shelf software package would be able to handle the variety of what we do daily,” Wiegand says.

Major Tool & Machine strives for continuous improvement and quality control throughout its operations. Led by their director of quality and continual improvement, MTM’s team is always looking at ways to make our processes better, less expensive and faster.

Manufacturing floor improvements include the establishment of dedicated production cells for similar types of parts and other organizational methods.

Continuous improvment projects are broken down into a number of steps that follow the company’s Six Sigma and lean methodology of “define, measure, analyze, improve and control” with the emphasis on reducing variation and waste. Projects are led by one of the company’s five Six Sigma Black Belts; 24 employees also have earned their Green Belts, and all employees are trained to Yellow Belt status, the company notes.

The company has a goal of increasing plant throughput, which helps it respond to customers on a timely basis, improves profitability and earns it the recognition of its customers and peers as a preferred supplier, he adds.

Throughput is maintained and improved through a set of operational metrics established by the company at the beginning of each year. Manufacturing personnel have daily, weekly and monthly goals to reach.

In the last few years, Major Tool & Machine has expanded its lean manufacturing philosophies to include sustainability practices. The company uses electronic modeling and informational transmittal in place of paper in many parts of its operation, recycles reusable products and is reducing its energy consumption through the use of efficient lighting. It has also just completed a centralized recycling and sustainability center that consolidates and optimizes handling of all materials and machining fluids.

“For us, sustainability and lean manufacturing go hand in hand,” Wiegand says. “Why would we use more metal than we need? Determining the amount of material we need up front through nesting and modeling software and techniques and reducing the amount of raw material we use is more efficient and sustainable than just cutting a piece of material and recycling the waste.”

The company is experienced in many nondestructive testing techniques including the use of radiography, magnetic particle, liquid penetrant, visual, ultrasonic and helium leak testing.

The common thread in all of Major Tool & Machine’s operations and successes is a staff of experienced and highly qualified engineers and manufacturing personnel.

“We have an empowered and engaged culture here – we want people to make important decisions, be engaged with their jobs and do the best jobs they can every day,” Wiegand says.

“We measure the performance of our teams through feedback channels that allow for continual improvement – this element is essential to the team’s ability to meet and exceed their objectives,” the company says. “Through the team process, with a focus on our vision of being our customer’s premier supplier, we can provide the highest level of customer satisfaction possible.”

The company’s teams include:

Cross-functional support teams are also in place for performance improvements, Six Sigma projects and other short-term initiatives. “Whether an employee is part of a short-term or permanent functional team, the goal is to achieve success through performance and utilize the classical components of teamwork to meet each objective in a timely and efficient manner,” the company says.

The company’s manufacturing, customer-focused and support teams meet monthly to develop and share continuous improvement projects. As part of the company’s on-going reward system for improvements made, each team presents to managers and customers at least annually and is judged against its peers. Teams are required to demonstrate specific, measurable, attainable, realistic and time-bound (SMART) goals during the course of each project.

A team-based structure has been in place at Major Tool & Machine for years but optimizing cooperation and collaboration among the various teams was a top priority of Wiegand’s when he joined the company after working in various management roles for several Fortune 500 companies.

“One of the things I think we’ve been successful in since 2006 is moving from a centralized management structure to a more engaged and empowered team structure,” he says, noting this transition was made because of and as a result of the company’s growth.

Wiegand sees his personal management style as being a combination of several philosophies acquired during his more than 25-year career. “I believe in leading by example, with a service orientation,” he says. “We set the expectations and goals and provide the people who work with us the tools they need to get their jobs done in the most effective way.”