Back to Profile Gallery > Marlin Steel 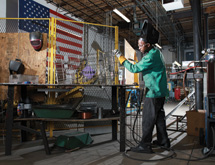 The success of Baltimore-based Marlin Steel is a textbook example of how to excel despite adversity. When Drew Greenblatt, president and CEO of Marlin Steel, bought the company in 1998, the operation was a profitable bagel basket producer that had been humming along to the same operational tune for more than 30 years.

Yet, shortly after Greenblatt bought the company, two dramatic changes occurred in the market that nearly brought the business to a standstill. “The Atkins Diet took off in a big way; we were nearly devastated,” Greenblatt recalls. “With everyone giving up carbs, the worst thing in the world to be at that time was a bagel basket manufacturer.”

Meanwhile, as the nation was trading carbs for protein, China was importing metal baskets into the U.S. market at a price at which Greenblatt and his company could not compete. “It soon became very difficult to keep the same business model that had sustained the company for 30 years prior,” he says.

But in 2001, a serendipitous phone call from Boeing changed everything for Marlin Steel. “The client needed some customized baskets relatively quick, and we were able to engineer exactly what they needed within the time requirements,” Greenblatt explains. “From there, we started getting more orders for customized baskets. Before long, we changed from a company that strictly made bagel baskets to one that engineered customized wire products for a number of industries.”

With a new business model, Marlin Steel left the tumultuous waters of a declining, competitive market for the relative predictability of clients who wanted specialty items manufactured with superb engineering and timeliness.

Far removed from the brink of disaster it faced more than a dozen years ago, today Marlin Steel fulfills custom orders for industry powerhouses such as Boeing, DuPont and Caterpillar. Each of the companies use Marlin baskets to carry or wash parts during their assembly processes. As Greenblatt tells it, “You can’t turn a battleship on a dime. The transition from bagel baskets to where we are today took some time.”

For Marlin Steel, turning the proverbial ship around was made easier thanks to the expertise of its employees. “Nearly 20 percent of our staff consists of mechanical engineers – they’re our secret sauce.” Greenblatt notes. “The types of clients we have now have complex designs they want developed. They come to us with heartburn and headaches and our engineers develop elegant solutions.”

Marlin Steel places importance on its engineering staff. According to Greenblatt, every new project is carried out by an in-house engineer.

“Our engineers work on every project from inception to delivery,” he adds. “The same engineer will meet with the client in the beginning, learn about the client’s needs and then design a solution. That same individual will stay with the client throughout the process of design and manufacturing. Our engineers own each of their projects – they understand the process and are a pivotal part of creating a quality product for our clients.”

The whole process for Marlin Steel is summed up quite easily: “Quality engineered quick.” The company feels so strongly about the phrase, it had it trademarked. “Our future is in highly engineered, high-quality products,” Greenblatt adds. “It’s what our clients are looking for, and we have the unique ability to deliver those types of items.”

Marlin Steel’s secret weapon may be its engineers, but, as Greenblatt explains, the cohesiveness of the entire company sets the tone for the success of the overall business. With 32 employees, the entire staff is on board for the same mission: Quality. “With each project we do, we have a very detailed process,” he adds. “Every time we do a job, it’s of the same quality standards.”

As a manufacturer of steel products, Marlin Steel has taken part in the recent boom in U.S. oil production. The company has been able to expand into this venue when needed, albeit on a custom-order basis. To fill the demands in this growing industry, and to better serve its current clients, Marlin Steel has invested $3.5 million in robotics.

“These machines, which are all made in America, add to the quality of the products we produce,” Goldblatt notes. “We have the engineers to design the solutions, the technology to produce them quickly and the staff to deliver a great product. We’re a new Marlin, and it’s worked – we’ve grown seven years in a row, despite the recession.”