Operating out of its base set across a seven acre site located just outside of Hull in the north of England, Martin Williams (Hull) Ltd. (Martin Williams) is a highly trusted bodybuilder, paint shop, Effer truck-mounted crane supplier and accident repair specialist that engages with clients that serve several commercial sectors. The roots of the business date back as far as 1990, 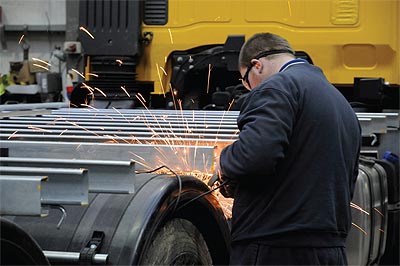 when Martin Williams left his job of 26 years to set up a small accident repair centre. The fledgling business proved to be highly successful and continued to grow over the subsequent years, while adding new competencies to its extensive service portfolio. Martin Williams celebrated its 25th anniversary during 2015 and today operates a 65,000 square foot workshop, which incorporates accident repair, painting and fabrication facilities.

“We now specialise in the construction of new vehicles that range up to 32 tonnes gross weight and build anything from vehicle flats to specialist vehicles and crane-mounted trucks. We are moving towards 1000 builds per year and also continue to focus on the repair side of the business, which is something that the company has always undertaken,” elaborates Director, Chris Williams. “The paint shop looks after all of its own work as well as additional work that comes through from the cabs and vehicle bodies that are fabricated and repaired at Martin Williams, which keeps this part of the business very busy.”

On the 15th November 2016 it was announced that Martin Williams had completed the acquisition of the defence manufacturing business Penman Engineering Ltd., which had previously fallen into administration during August 2016. Penman was established in 1859 and during its history quickly built a solid reputation for the construction of armoured vehicles for clients including the Ministry of Defence (MoD), the United Nations and NATO as well as various non-governmental organisations. The purchase of Penman represents an important strategic move for Martin Williams, which brings further fabrication and painting capacity into the business. The technical expertise of Penman will also allow Martin Williams to further extend into new markets, while making additional specialist fabrication activities fully in-house. “The acquisition of Penman partly came about because we were looking for another bodybuilding site to take over. We were initially looking to find a site within the northwest of the country, however we found that Penman had gone into administration and it was a company that had operated within the cash in transit and specialist vehicle markets. These were areas that we had already started to build on, meaning that today we are currently tending for this kind of project at both Penman and Martin Williams, so the acquisition was a really good fit for our business,” Chris reveals. “Since taking over the company we have kept on some of the skilled specialist people within Penman and are now running the administrative side of the business. Penman has its own high-quality paint shop as well as its own substantial fabrication facilities and this has enabled us to bring all specialist engineering work in-house, whereas previously some of this work would have been given to subcontractors. Penman also has a highly experienced design team that now also designs for Martin Williams, which creates excellent synergy across the company.” 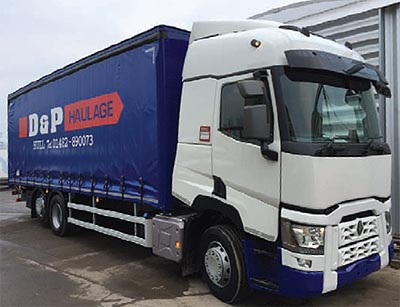 Further to managing its fabrication, accident repair and painting services, Martin Williams is also proud to operate as the sole UK importer for Effer truck-mounted cranes. Effer is an innovator in the crane industry and is at the forefront of loader crane developments, including building the first 100-tonne/metre cranes and producing the biggest crane in the world mounted on a 32-tonne chassis. By partnering with a trusted commercial vehicle business such as Martin Williams, Effer has found a reliable service provider that represents the business across the UK. “We have a long history of fitting cranes within the business, which have traditionally come from a number of crane manufacturers. When Jon Cooper joined the business as a Sales Director for both Penman and Martin Williams, he brought with him experience with working for Atlas Cranes. He also had a previous relationship with Effer, which at the time felt that it was not receiving the support that it required within the UK and we were able to take on the contract as the company’s sole UK supplier,” Nick Williams, Co-Director of Martin Williams explains. “This market has grown very well for Martin Williams and we fitted around 30 Effer cranes during 2016, as well as 25 units from other manufacturers and we expect similar sales for 2017.”

With a diversified service portfolio, an international network of supporting service centres and a growing presence within the sector for armoured vehicles, 2017 is set to be an exciting year for Martin Williams, with several opportunities appearing within the market. “The demount segment seems to be a big market in the UK at present as it allows clients to move twice the amount of load with half of the number of vehicles, while payload is another area that is becoming important to clients that want lighter vehicles to allow better payloads and more efficient fuel consumption,” Nick concludes. “We are looking to maintain the growth of Martin Williams during 2017 and while we do expect orders to plateau slightly, we are aiming to continue to grow the business rather than to step back. We have the funding in place to continue to work with developing Penman and intend grow at an aggressive rate in that area.”