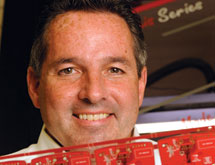 Mass Design Inc. stands out as a manufacturer of printed circuit boards for a number of reasons, Sales Manager Bill Gately says. Perhaps the most significant one is that the company is an American manufacturer at a time when many customers still outsource their needs overseas. Also, at approximately 63 employees, Mass Design is one of the smaller companies of its type in the United States. Where some people would see qualities like these as liabilities, Gately says Mass Design actually benefits from them, and the market conditions are changing in its favor.

“The bulk of the big guys are huge and they’re overseas, and in North America the companies are around 100 to 200 employees, so we would be considered a small company,” he says, adding that the company’s size gives it the ability to serve customers more effectively and efficiently than many of those overseas competitors.

Based in Nashua, N.H., Mass Design has been designing and fabricating printed circuit boards since 1986, when founders Tony Bourassa and Paul Boduch pooled their experience. Today, the company serves a number of industries, including military, medical and instrumentation. Gately says the majority of Mass Design’s customers are local and very loyal, and include such companies as GE, Siemens and Tyco.

Speed of Technology
Mass Design has earned the loyalty of its customers, Gately explains. As a small, domestic manufacturer, the company has the capability to serve customers in ways large overseas manufacturers can’t. “Our niche in the marketplace is small quantity, quick turnarounds, medium production and new product introduction,” Gately says.

The company’s small size and vertical integration make it much easier for Mass Design to help customers turn around a printed circuit board at lightning speeds compared to others. Gately says the company can design, prototype, submit a circuit board for approval and then begin production within three to five days, whereas an overseas manufacturer may need three to five days just to complete the design phase. At the speed technology moves today, Gately says this kind of turnaround is appreciated. “Companies coming out to the marketplace with new products, to them the most important thing is not cost, but how quickly they can get their product to the market,” he says.

Along with that speed comes quality, something Gately says is due to the company’s strong emphasis on engineering and the high caliber of its employees. Although many companies in the industry hire the least expensive labor they can find to keep prices down, Mass Design stresses hiring the best and keeping their skills sharp. “We look for the best people possible that are a fit for Mass Design,” Gately says, adding that the company makes sure its employees have the latest certifications. “The people are really the ones who make the product.”

The average tenure of a Mass Design employee is approximately 15 years, according to Gately. With that kind of expertise in play, it’s no wonder many customers are willing to pay higher prices for the company’s products. “When they average out the costs, it’s an insurance policy for some of them,” Gately says. “They know that when they get our product, it’s going to work.”

Latest and Greatest
Complementing the company’s human element is its manufacturing facility. The 80,000-square-foot space is devoted to fabrication and assembly, and in both aspects Gately says the company’s emphasis is on cutting-edge equipment. As technology continues to take advantage of ever-smaller components, it requires up-to-the-minute equipment to fill customers’ requests. “As the industry is getting more and more electronic, everything’s getting smaller and smaller,” Gately says. “You can barely see the part in the palm of your hand, it’s so small.”

Because customers expect it to do things right the first time, the company invests a lot in new equipment. Gately says it spent nearly $500,000 on new equipment over the last two years. This equipment can handle the tighter spacing, smaller components and higher layer counts of the current generation of printed circuit boards, he says.

Changing Momentum
Even though the move toward more overseas manufacturing wiped out a great deal of smaller manufacturers in the United States, Gately says Mass Design expects the momentum to swing the other way in the near future. He notes that manufacturing costs in China and other countries are beginning to rise, even as the quality remains the same. Additionally, many customers are beginning to realize that overseas manufacturers don’t adhere to the same environmental standards they try to demonstrate in their own operations at home.

“When customers truly start looking at the total cost of having a product made overseas … it’s not as [advantageous] a percentage as it used to be,” Gately says.

As these trends continue, Gately says, Mass Design expects to be at the forefront of the industry for years to come. “We see steady growth over the next two years,” he says.