Back to Profile Gallery > McLaren Automotive

With roots dating back to 1963, the McLaren brand has been a force in motor racing for more than 50 years. The business was originally founded as Bruce McLaren Motor Racing and the company has retained a core DNA of high performance and engineering excellence that continues to define the McLaren name to this day.

McLaren Cars was created in the late 1990s to work on some road car projects outside of the core racing team. “Following several highly successful road car projects by McLaren Cars, such as the iconic McLaren F1 and the McLaren Mercedes SLR, and with a proven track record of designing and building some of the world’s best sports and supercars, McLaren Automotive was 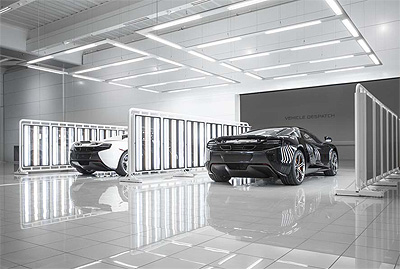 formed in 2010. The company’s first car, the McLaren MP4-12C, rolled out of the newly-built McLaren Production Centre in 2011 and thus far, we have built nearly 10,000 cars in total,” elaborates Executive Director of Operations, Alan Foster.

“Counter-intuitively there isn’t a huge amount of crossover between Formula One cars and our road-going sports and supercars. One is designed to drive as fast as possible round a track for two hours per fortnight and the other has to be extremely fast but comfortable and usable for a lifetime,” he continues. “There are some obvious crossovers including the fact that every McLaren since 1981, be it built for the road or track, has been constructed using a carbon fibre chassis for extreme strength and light weight. In addition, we have taken some lessons from Formula One electronics and software and some of the hybrid components of the McLaren P1TM were engineered by McLaren Applied Technologies. We can also move engineers between projects if needed, but the transition isn’t actually as common as it might seem.”

By building on its rich heritage of industry experience, McLaren Automotive has managed to achieve a high level of success in a relatively short amount of time. During 2014 for example, it enjoyed a turnover of approximately £475.5 million, with cars selling from between £198,000 to £2 million. For the company’s clients, the iconic McLaren name represents a discerning choice that offers a unique and desirable driving experience. “Two things tend to separate McLaren customers from the buyers of our competitors. Firstly, most of our buyers are drivers and choose to buy a McLaren because of the car’s pure focus on the driving experience. High proportions of our customers use their car on a track and take enjoyment from the experience and the feedback the car gives them,” Alan says. “Secondly, buyers of a McLaren tend to not follow the mainstream. As a relatively new company, there are a number of established competitors in the market place and they also build very good cars. As a buyer, if you follow the mainstream, you’d tend to buy an established brand. The fact that buyers are turning to McLaren tells us that our buyers tend to be non-conformist, entrepreneurial and willing to take a buying decision that separates them from the mainstream.”

The luxury sports cars developed by McLaren Automotive are assembled in any number of bespoke configurations and while each vehicle is hand crafted, the company is extremely agile in designing and producing new models. “As a relatively new company with its foundations taken from Formula One, our speed of response, nimbleness and agility separate us from our competition. For example, in 2015, we launched a 675LT Coupe – a road car but very focused on the track. We immediately started getting requests from owners who wanted the car but as a Spider (convertible) configuration,” Alan says. “Normally it would take a company two to three years to design and engineer such a car. We launched it six months after the introduction of the Coupe as a limited volume run of 500 cars and they sold out in two weeks. If you twin this responsiveness with our 100 per cent undiluted focus on building the world’s best sports car, you see why customers have grown to appreciate our cars in a relatively short space of time.”

McLaren Automotive ended 2015 having built 1654 cars, while engineering the potential to greatly increase this number over the coming years through the launch of its McLaren Sports Series of cars. The Sports Series was introduced at the 2015 New York International Auto Show at a lower entry price point of £126,000, meaning that it represents a significant volume opportunity for the company and is currently available in McLaren 540C, 570S and 570GT and for the track, 570S GT4 and Sprint variants.

March 2016 saw the communication of the McLaren Track22 business plan, which was unveiled at the Geneva Motorshow and outlines the intention of the company to invest £1 billion into research and development over the coming six years, leading to the launch of 15 all-new cars of derivatives. Further to introducing new vehicle designs, Track22 also encompasses the development of new technology including hybridisation. “When the company started in 2011 we made a commitment to launch one new car or derivative per year and many observers thought this would be impossible for such a new company. In 2015, we launched five new cars or derivatives and in the six years of the business plan we anticipate launching 15 all-new cars. This is unprecedented in this segment of the market and is testament to the agility of the company,” Alan continues. “We also see the market tending towards the use of hybrid technology. For most car companies, this provides emissions benefits but for a driving-focused brand like McLaren, we also use hybrid for drivability benefits because an electric motor has up to 100 per cent of its torque available at zero rpm, benefitting the acceleration of the car. By the time we get to the end of 2022, around 50 per cent of all McLaren cars will feature some kind of hybridisation.” 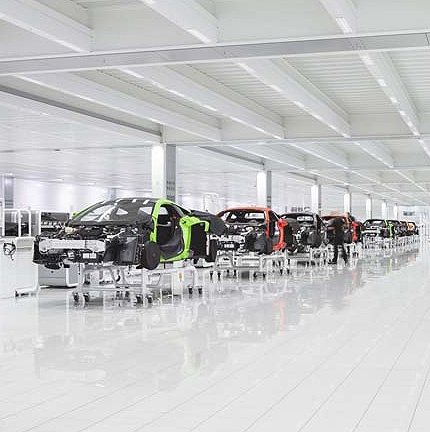 To enable the development of the business, McLaren Automotive built the state-of-the-art McLaren Production Centre facility valued at £50 million during 2011. The new plant embodies the company’s dedication to delivering the highest levels of quality. “The McLaren Production Centre was designed by Foster and Partners and is a building that truly reflects the company’s brand values. Every operation on the production of a McLaren car, including the painting, is done by hand – there are no robots. It is our belief that a highly skilled and trained craftsman can do a better job than a robot, especially because of the highly complex nature of the specification permutations of our car. It’s very rare that we ever build the same car twice, owing to the specific demands from our customers, meaning that we also don’t run the cars on an automated production line. All the cars are placed on a trolley and this trolley moves from station to station during the production process. This means that if we need to do something specific to a car that takes longer, we don’t have to stop the whole line and can instead move that car to the side and the rest pass through,” Alan says. “That said, behind the scenes, there are huge amounts of technology that make the processes work, such as the Wi-Fi system that’s connected to all of the tools to ensure that we record and validate all of the tolerances during the building process.”

Having built more than 1600 cars in 2015, McLaren Automotive has an ambition to sell more than 3000 cars during 2016. In the wake of the introduction of the McLaren Sports Series of high performance sports cars, this increase in sales and production necessitated the introduction of a second shift. This is progressing well and the McLaren Production Centre continues to operate efficiently. “Having run the McLaren Production Centre at the same rate for a while, any such change was always going to be challenging internally and with our supplier partners. We implemented a second shift into the Production Centre in Q2-2016 which involved the recruitment of an additional 250 employees. It naturally takes time to recruit and train these production engineers but we are through that now. The increase took us from our previous rate of ten cars built per day to 20 cars per day. We have hit that number frequently in recent weeks but now need to establish it as the norm. By the end of the year, I am confident that we will be achieving 20 cars per day as the natural running rate.” Alan concludes. “The best example of our speedy establishment is the recent launch of the McLaren 570S – McLaren’s first sports car (rather than super car) and the first car in the new Sports Series range. The media evaluated the McLaren against the established competition and in their independent eyes, rated the McLaren as the best car in its segment. Some experts have said it’s the best car on sale today. It’s very rare that any car comes into a new segment and wins in its first iteration against very well established and respected competition, and it’s a huge pride point for all within the company that we have achieved this.”