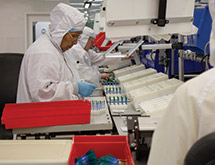 When David Shimkus joined Megadyne Medical Products 10 years ago, he joked about having T-shirts made that said “Rework ‘R’ Us” because the company spent 10 percent of its time fixing manufacturing errors. But after a decade of improving its process, Shimkus, vice president of operations, says everyone along the manufacturing line is attuned to quality and those production issues are virtually eliminated. “This stuff has helped us dramatically improve in terms of eliminating rework and eliminating waste,” he says.

The changes in the manufacturing process are helping to ensure Megadyne has a strong future as it celebrates its 30th anniversary this year. The company’s first product was a non-stick-coated electrode. Coating the electrode prevented blood from coagulating on the surgical blade, which can cause the electrode to stick during surgery unless cleaned constantly. The product was a breakthrough for the medical industry and Megadyne has been known for its innovations ever since.

The company continues to build on its reputation and offers more than 300 products, 98 percent of which Megadyne manufacturers itself or touches in some form. Its offerings include Mega Power electrosurgical generators, Mega Soft patient return electrodes, scalpel replacements, electrosurgical pencils and suction coagulators. “There are very few products we’re not into today,” Shimkus says.

The ever-evolving medical industry dictates that Megadyne must constantly consider its next innovation. “Every year we try to introduce new products to the marketplace,” Shimkus says. This past July, the company introduced the Zip Pen smoke evacuation pencil. The device continues Megadyne’s tradition of solving surgical room problems, in this case by evacuating the harmful byproducts contained within the surgical smoke that is released during procedures. Most existing smoke removal tools are cumbersome and many doctors prefer to work without them. But Megadyne’s Zip Pen solves that problem with an ergonomic grip that eliminates 100 percent of the torque created by evacuation tubing. The hope is that a comfortable product will encourage more doctors to utilize smoke evacuation, creating a better working environment for surgeons and nurses.

Those kinds of innovations directly benefit Megadyne’s end-users, which include hospitals, surgery centers, clinics, surgeons and nurses – many of whom the company sells to directly or through distributors. The company is headquartered in Draper, Utah, where it houses its sales, marketing, manufacturing, engineering and customer service departments. Even the inventory is kept on site to ensure the speedy fulfillment of orders and Megadyne recently added 13,000 square feet to its finished goods warehouse.

While many companies have moved rapidly toward automation, Shimkus says it doesn’t make as much sense in Megadyne’s market. Automation machines can be costly and take months to build, but advancements occur in the surgical tools market so frequently that automation technology can already be obsolete by the time it is delivered. “We found that we focus on flexibility, responsiveness and being agile,” Shimkus explains. “The most flexible and responsive tool is people.”

To promote flexibility in its workforce, Megadyne routinely cross-trains employees to operate multiple stations along the production line. Additionally, Megadyne is flexible in what it produces on a daily basis. Shimkus says the company uses demand flow technology to match manufacturing with the products customers are actually buying. The goal each day is to produce small lot sizes of multiple products, with differing items being manufactured simultaneously.

The design of Megadyne products has helped support that flexible manufacturing. Many items share similar base components, allowing employees to make individual parts and then change the variability near the end of manufacturing to create the specialized final product.

But delivering orders to customers on time is about more than flexible manufacturing. About 95 percent of the products Megadyne produces are made to stock. Shimkus says the company aims to carry a safe inventory of each product so that when an order in placed it can be shipped the next day or sooner. Even for international customers, Megadyne strives to ship and deliver products within five days. The ability to meet customer demand quickly has made the company competitive in the marketplace, Shimkus says.

Megadyne’s suppliers play an important role in the company’s flexible philosophy, as well, Shimkus says. The company is moving toward a kanban system to control the supply chain of parts needed for production. Each component is kept in two bins, one used for production and one for stock. Once the production bin is depleted, Megadyne places another order to replenish the components.

Restructuring the manufacturing process required buy-in from employees, leading Megadyne to focus on steering the company’s internal culture. Shimkus explains that employees often form a culture whether or not a company tries to create it, so Megadyne wanted to be an active part of that process. “We believe in culture by design rather than default,” he says.

“One of our goals is driving ownership and responsibility down to the smallest level,” Shimkus says. To do so, Megadyne moved away from the supervisor model where distinct segments had an individual task to perform to a small team format where individual groups of five or six people are responsible for multiple steps along the manufacturing process. Now, the entire staff has a strong understanding of inventory and cycle counts and is held accountable for the quality that comes out of their area.

The company teaches the concept of inspect-work-inspect, where each person on the assembly line reviews the work of the previous step before making their contribution and passing it to the next station. As a result, everyone is an inspector, Shimkus says.

Megadyne has continued expanding its market presence since the introduction of the coated electrode in 1985, according to Michael Hintze, vice president of marketing.  When Hintze joined the company 20 years ago, there were only 25 employees. Now there are more than 150. “We’re fortunate,” Hintze says. “We’ve grown every year we’ve been in business.”

Although it is headquartered in Utah, Megadyne’s international sales managers span the globe and its reach touches 76 countries. Hintze credits the company’s new products, improved manufacturing efficiencies and cost reductions with driving that growth. “In the marketplace, we’re known for our simple innovation, quality and value,” he says.