Back to Profile Gallery > Metglas Inc. 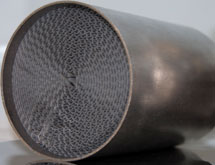 As the world becomes more energy-efficient and conscious of the air we breathe, Metglas Inc., based in Conway, S.C., sees only growth in its future. The company’s rapidly solidified amorphous metal is used for distribution transformers and exhaust gas recirculation for emission reduction.

Metglas began as a research and development project in the 1970s within AlliedSignal in Morristown, N.J., and soon after evolved into a business unit of the company. General Electric (GE) used Metglas’ amorphous metal to produce 1,000 amorphous metal distribution transformers (AMDT) that were successfully installed in 1988 on the U.S. Electrical Grid. Shortly after the success of the government-funded project, Metglas opened its commercial amorphous metal casting facility, Senior Vice President of Sales and Marketing Dave Millure says.

“The business grew in the United States until the early 1990s when deregulation eventually damaged the country’s utilities’ incentive to invest in energy efficiency, such as that afforded by AMDTs,” Millure adds. “Metglas reacted by developing new markets in Japan, India and China.” Metglas expanded from two to three large casting lines in its South Carolina plant while it’s new parent company also brought four lines into production in Japan.

Metglas is the brand name of the company’s amorphous metal, which is thin and has a random atomic structure. For distribution transformers, like those on telephone poles, those two factors yield a very energy-efficient device. The major markets for this segment are India, China, the Philippines, Japan, the United States, Canada, South Korea, Mexico and Brazil. Developing markets include Europe, Russia, South Africa and the Southeast Asian nations.

Transformer manufacturers have a choice of using Metglas’ product or conventional electrical steel and often, Millure says, there is not a compelling drive to push utilities to go for higher efficiency. Because of this, Metglas spends a lot of its time creating demand for its product by consulting with environmental advocates, such as the American Council for Energy Efficient Economy and government agencies, such as the U.S. Department of Energy and the European Commission to push the market towards energy savings and CO2 reduction.

The hope is to sway utilities to become more efficient, Millure says. “The transformer manufacturers do what the utilities tell them to do,” he adds. “The utilities want to keep the cost down and don’t want to increase efficiency in some situations.”

In the automotive world, the company is responding to its Tier I customers’ demands by introducing new nickel-based metal joining alloys for applications, such as automotive heat exchangers for exhaust. These new alloys have a lower melting point.

“We were the first to commercialize amorphous metal and we have been driving productivity up and cost down over the last 15 years,” says Dodd Smith, president of global operations. Metglas employs more than 200 people and all manufacturing employees go through extensive training to cast and process amorphous metal. The custom, in-house training program can take six months to two years. Productivity is a function of the length of the casts and the turn-around time between casts and the yield, Millure says. “Making the process repeatable and robust is the primary goal,” he adds. “Metglas will continue to increase productivity using close collaboration with our sister facility in Japan.”

Although new developments and innovations are taking place regularly at Metglas, the company is still looking for ways to provide amorphous metal for use in motors. “There has been a lot of interest,” Millure says. “Motors are an interesting opportunity for Metglas and a challenge for us to create products in the future.”

Metglas’ leaders see only growth in the future as more countries become aware of the benefits and take advantage of energy-efficient solutions. “You can calculate exactly what it does for you,” Millure says. “These efficiency standards are growing all over the world and as they progress, so will we.”