Back to Profile Gallery > Metrolina Greenhouse 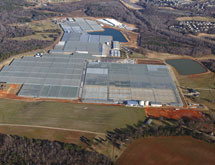 Metrolina Greenhouses has grown 39 of the past 40 years since it was founded. That’s not just in revenue, but in size, as well. The company constantly expands its acreage, whether it’s building covered greenhouses or cultivating outdoor grounds for growing plants. Metrolina Greenhouses occupies 147 acres, making it the largest single-story heated greenhouse in the country. It also maintains 30 acres and counting of outdoor growing space.

Recently, the company laid the foundation for a 1.5-million-square-foot expansion. Metrolina has graded the site and installed a pond for water usage. However, the family owned company says it is a year away from above-ground construction. Before its big expansion begins, Metrolina will tend to what it already has.

Metrolina has laid an 11-acre perimeter of irrigation lines and is getting ready to pour concrete for its outdoor flood floors – an area where plants’ roots soak up water from the floor. The company also is tearing down and rebuilding five-and-a-half acres of greenhouse space. Its previous Cravo greenhouses will be replaced with a glass greenhouse, on par with the others Metrolina uses today. A new corridor will connect it to its neighboring greenhouse. The company says the new space should be operational by January.

“We tore down an older, cheaper greenhouse because it didn’t have a long life expectancy,” Vice President Thomas Van Wingerden says. “We tore it down and are rebuilding a glass structure with cooling pads. It’s a more state-of-the-art greenhouse. We had to rip some of the concrete out and we recycled 4,000 tons of concrete to reuse as roadbeds around the facility.”

When Van Wingerden says “we,” he means that quite literally. Van Wingerden may be the company’s vice president, but he has developed a forte for construction and facility maintenance and leads all of the company’s building efforts. Rather than hire third-party general contractors, he developed the do-it-yourself mentality from his father, Tom Van Wingerden, who founded Metrolina. The independent streak is shared by his three brothers.

Art Van Wingerden is in charge of operations while Abe Van Wingerden heads sales and marketing and Michael  Van Wingerden specializes in transportation and logistics. Each brother, however, knows enough of the overall operations to add input to each division and the family gains knowledge from its employees, as well.

“We have the greatest team of employees here, whether that’s management or general labor,” Art Van Wingerden says. “Our success has come from the team. There is not one person who does it all. It takes the whole team to make it work.”

The brothers’ father moved to Charlotte, N.C., in 1973 and started his own company – Metrolina Greenhouses – and spurred some innovation of his own, showing not only his business prowess, but engineering and manufacturing acumen, as well.

“Metrolina as a company has always been innovative in technology,” Art Van Wingerden says. “My dad came up with an automatic transplanter that picks up plants and puts them in the finished pot automatically, so no human hands have to touch the plants. We have one transplanter that does 1,200 to 1,400 flats an hour. These flats have 36 plants per flat. The average for these types of machines is 800 to 900 an hour. We can do up to 1,500 flats per hour if everything is working good.”

Though the brothers bought the company from their father in 2006 before his 2009 passing, they say that the innovation spirit continues today. Metrolina has made water waste its No. 1 enemy and developed a system to eliminate it. Metrolina can store 150 million gallons of water in 20  acres of retention ponds that is filtered to a 5-micron level and used to water plants. Ninety-nine percent of its plant water is recycled and the remaining 1 percent of its plant water and its drinking water is well-drawn. It uses no municipal water and says that its filtering system cleans the water to a greater degree than the 30-micron water distributed by the city.

The company also switched its boiler system to be more sustainable. “Most greenhouses are heated through a boiler that uses No. 2 diesel fuel or natural gas,” Art Van Wingerden says. “Three years ago, we needed to invest in more boilers because we weren’t heating  as much as we needed. We looked at seven different heating options and the way we went was with biomass fuel by burning wood chips. Last winter, we heated 98 to 99 percent of our greenhouse with biomass boilers.”

As Metrolina continues to expand and improve to keep up with its customers on the East Coast, Thomas Van Wingerden says the company will continue to be an industry leader by controlling the quality of its facilities and technology.

“We’ve always managed everything in-house since we started,” he says. “We enjoy construction so we’ve always done that work ourselves. We have an in-house electrician on staff and a welder and we erect our own steel and put glazing and glass in. We feel like we have a lot more control if we do it ourselves. We are the expert of what we want and there are some out there who build greenhouses, but we understand what we want and how to get it done.” mt