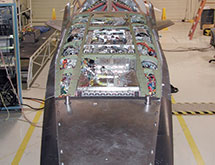 When hundreds of millions of dollars are riding on a single test for an aircraft prototype, the aerospace industry turns to Micro Craft Inc. – experts in test hardware and wind tunnel models. “The largest wind tunnel complex in the world is nearby,” CEO Jim Herron says. “It is owned and operated by the U.S. Air Force and it’s extremely expensive to run. There is a lot riding to make sure the model hardware doesn’t fail.”

Charles Folk founded the Tullahoma, Tenn.-based company in 1958 as a provider of complex wind tunnel models and other specialty hardware. The company grew quickly through the 1990s, employing as many as 1,100 people and operating 14 sites. After a brief ownership by an investment group, Micro Craft was acquired in 2003 by a large business.

Micro Craft was the prime contractor for design and fabrication of NASA’s three X-43a scramjet-powered airplanes, unmanned experimental hypersonic aircraft that successfully tested various aspects of hypersonic flight up to Mach 10. “But when the X-43 program was cancelled, our value to our owner diminished and we no longer fit their core product lines,” Herron recalls. “In 2011, the employees found a way to buy back the company using their pensions in the structure of an Employee Stock Ownership Plan. It is 100 percent employee-owned and no one owns more than 5 percent of the company.”

Today, Micro Craft remains a key provider of complex wind tunnel models and other specialty hardware. Its customers not only include NASA, but also the United States Department of Defense (DoD) and OEMs. “It’s a neat niche,” Herron notes. “We build one-of-a-kind production flight hardware as well. Without ground testing, there is no plane to build 15 to 20 years from now. That’s the cool part: We are building stuff people won’t see for 10 to 20 years and we get to see stuff that may never actually fly. It’s a lot of fun.”

Inside its 57,000-square-foot, AS 9100-certified manufacturing facility, Micro Craft worked with the DoD to design a subscale model of the F-35 from their full-scale aircraft. During the design phase, Micro Craft’s team performed a thermal and stress analysis, as well as determined what materials needed to be used. “Once we have done the design to build the model, we go about it like any other shop; it’s planned out and we start building it,” Herron says.

Instrumentation will be installed after the model is machined. Engineers use simulators to ensure everything works on the model exactly as it would on the real aircraft. “For example, if there is a bomb on the plane, ground tests make sure it will release from the plane and not fly back up into the plane,” Herron says. “We use instrumentation to measure the bombs on the plane and perform trajectory tests.”

The average manufacturing process is three months, but the F-35 model took six months. Micro Craft’s staff of 65 includes engineers, machinists and electrical technicians, most of whom attend at least a two-year technological school before coming to work at the company. They are paired with a mentor and trained before being assigned to work on a model. “They won’t be working on this stuff right off the bat,” Herron notes. “We put them on production work to get a feel for the place and train them as we go.”

Senior engineers use JobBOSS, an on-premise ERP manufacturing software, to plan out and keep track of the company’s workload, which can often add up to seven or eight projects at a time. The senior staff then assigns teams to complete each project. New hires are allowed to work alongside their mentors on models.

Although the models are most often a scaled-down version of an aircraft, the models can cost $200,000 after parts and labor. The F-35 model was made from stainless steel and had a more than $1 million price tag. “These aren’t Revell kits,” Herron says. “It’s really complicated with dozens of different flap settings that may go up and down, and tails that twist and turn. We have to simulate all that in the wind tunnel.”

Models start from scratch every time and can range in size to fit a wind tunnel about one-foot in diameter up to the 80-by-120-foot wind tunnel at NASA’s Ames Research Center in California. It makes advanced planning a challenge for Micro Craft. “We have put a full-scale plane in the wind tunnel at NASA Ames in the past,” Herron says. “Every one is different.”

To ensure it receives the parts it needs on-time, Micro Craft works with 150 suppliers that understand the company and its work. “This whole area is a real unusual enclave of scientists and technical people that know the mission; they get it and that’s kind of cool,” Herron says. “That’s one of the reason’s we are here in Tullahoma, it’s easy to get people to understand what you are trying to accomplish.”

Because its suppliers understand its business, Herron says the company can call and ask for one box of screws rather than having to order hundreds of boxes because “they get it.” “They are willing to do that for us and we wouldn’t be able to do it without them,” he adds.

Moving forward, Micro Craft is looking to take its service beyond test hardware by helping its customers understand the pitfalls they might encounter later in production. “We can see things and we are building the first one,” Herron explains. “We know when something won’t work on the real plane and we are hoping that’s the next big step for us.”

Micro Craft, for example, recently built test hardware for a new electronic warfare pod for Raytheon, the Waltham, Mass.-based defense contractor. The company tested a small version of its pod and suggested how to improve the design of the packaging inside. “We built a smaller ground test model and a full-scale flight pod that flew and was successful,” Herron says. “Now we have seen what can and can’t be done with the test hardware, so we want to help you in the production of this hardware.”

Micro Craft continues looking to help its customers on the science end of development and provide more value, according to Herron. “We can leverage what we do now into bigger and better things to help them,” he adds. “I know where my bread is buttered and I don’t want to take their work, but we want to complement them.”