Back to Profile Gallery > Milwaukee Electronics 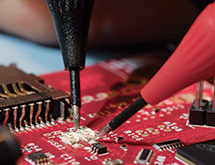 Over the years, Milwaukee Electronics has strived to be all things, but not necessarily to all people. It’s true that the company provides electronics manufacturing services for approximately 20 industries – such as appliances, foodservice equipment and dental equipment – but it looks for a very special client within those markets.

“We like the industrial companies that don’t need 2 million parts a year,” says owner and President Michael Stoehr. “Instead, we look for companies that need 500 to 5,000 a year for their production. We wouldn’t make refrigerator controls for a company like General Electric. But if there is refrigerator manufacturer who builds a specific refrigerator with a unique technology or application, that is right up our alley. We can design something specific to their needs and leapfrog over the competition.”

In general, the company focuses on the placement of parts on electronic circuit boards that allow a wide array of Web-based and electronic-based products to function. But when taking a broader look, it’s apparent that Milwaukee Electronics has added to its list of services in order to serve clients more efficiently.

“The 1980s were actually the sprouting years for a lot of Internet- and Web-based handheld electronic tools,” Stoehr says. “It’s close to the time when Microsoft and Amazon were created and it was a time of real evolution and changing technology to electronic-based rather than mechanical. I was an electrical engineer by degree and saw this company that was small, underutilized, regional, with a talented engineering staff. I thought there was a lot of upward opportunity for this small company.”

Since purchasing Milwaukee Electronics in 1985, the 60-year-old company has averaged 16 percent annual growth by zeroing in on market needs and adapting to those needs. Stoehr’s first step was to expand its customer base. It initially looked to the government and won 42 defense contracts within the first three years after the purchase. Over the years, it moved out of government and into the commercial arena serving an average of 17 to 20 industries at any given time.

In 1999, Milwaukee Electronics acquired an Oregon-based company specializing in the same services and gained customers west of the Mississippi. By the early 2000s, however, it was impossible to ignore the influx of U.S. manufacturers moving operations into Asia.

“If manufacturing was moving into Asia, we figured there would still be people in the United States who would at times need sourcing to go through faster than they could get in China,” Stoehr says. “So we set up an Internet-based company called Screaming Circuits.”

Screaming Circuits designs and manufactures quick-turn prototypes and short-run production PC boards with a few clicks of a button. Clients simply log on, choose a simple PC board assembly and the number needed as well as the turnaround time (one, two, three or five days).

“Speed is big in our industry,” Stoehr says. “Everybody wants things faster today than yesterday and they want it even faster tomorrow. With Screaming Circuits, an engineer doesn’t have to talk to another person. They can go to the website and say, ‘I want five boards in three days delivered here and I have 25 parts to put on it.’ And by pushing a button, he can get a cost at his desk immediately and doesn’t have to pick up a phone and talk to anybody.”

Milwaukee Electronics also set up an operation in Mexico to compete against low-cost manufacturing in Asia. It initially began with a leased space in 2003. The company’s continued growth, however, prompted Milwaukee Electronics to build its own space in Tecate, Mexico, which began operating last May and has the same capabilities of its sister plants.

“With our staff of 20 engineers, we’ve grown in our ability to help almost anybody that comes to us because we serve such a broad array of industries,” Stoehr explains. “An example is a project we are working on for a Brazilian company for a handheld inventory tracking device. They couldn’t find anyone in Brazil that knew how to do PC board design, electronic design, gears and drivers needed for the device. They could find someone to do one or two pieces, but they couldn’t find someone to do all five, six or seven. But we have done those things for other people and are currently doing it for this company.”