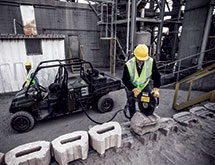 The Riverside, Mo.-based company has an exclusive agreement to manufacture its HIPPO Multi-power System for the Ranger Crew diesel side-by-side utility vehicle made by Polaris, an utility vehicle manufacturer based in Minneapolis. “Polaris is the only company that is producing an all-terrain ATV with a multi-power unit in it,” COO Chris Klope says. “The original idea for the unit was to satisfy military needs. That conversation got legs and we began some additional development work.”

Mobile Hydraulic Equipment engineered three revisions to the Ranger Crew multi-power system until it achieved the correct space, weight, center-of-gravity and performance requirements enabling customers to drive the equipment to hard-to-reach locations. “Customers can perform work immediately,” Klope says. “The question has always been, ‘How can we get large, heavy-duty equipment and work trucks in remote areas?’ Pipeline work usually requires bulldozing an entire area to get access, but the Ranger can drive in without compromising the landscape and without the added cost of bulldozing an area.”

“This is not an aftermarket product,” Klope notes. “This is a purpose-built vehicle with a multi-power generation unit incorporated into the vehicle. It gives customers the ability to access remote worksites with the durability and performance that Polaris and HIPPO are known for.”

Ranger Crew with HIPPO MPS debuted in July at the Polaris dealership show in Minneapolis where dealers were able to test the product and get an up-close look at the multi-power system.

Getting off the Ground

Mobile Hydraulic Equipment began in 1972 as a hydraulic service company that maintained service trucks and equipment. As years passed, the company’s owners at the time discovered its hydraulic circuits were overheating and inefficient, so they created a new hydraulic circuit that operated cooler and more efficiently.

“The company has gone through a series of owners, but one had been in the military and came up with the idea to build a portable power unit for the services,” Klope explains. “The unit had to handle severe duty, be dependable and rugged.” From there, the HIPPO Multi-Power System was born and adopted by U.S. Army Corps of Engineers for use. It was later modified so the product could be offered to commercial customers.

HIPPO filled a major gap in the market, Klope says. “We knew industries were using this gimmicky stuff that wasn’t really substantial,” he adds. “HIPPO is a reliable, severe-duty piece of equipment. Regardless of the end-use, the internal components are all the same as the military-grade unit, so customers get the same robust, military-grade performance in a commercial unit.”

Mobile Hydraulic Equipment is able to customize its HIPPO units to fulfill the demands of every client, which can include adding more or less pneumatics, hydraulics or electricity. “We customize a unit using the same robust components that go above and beyond anything else available,” Klope says.

A finalized HIPPO Multi-power System is comprised of various components built by a number of manufacturers that specialize in air compressors or generators, for example. Each unit is tested after assembly to verify power output for all capacities, to ensure it does not overheat and that there are no leaks.

Mobile Hydraulic Equipment does not keep a large inventory of units and fills orders just in time per the delivery date with an average 60-to 90-day lead-time. The company maintains close relationships with its suppliers to ensure they have inventory available when needed so it can provide same-day parts replacement for the military. “We have an agreement with the military to maintain a certain level of inventory,” Klope notes.

Mobile Hydraulic Equipment operates its plant by batch processing, which builds units for its customers with long-term agreements, and by standard assembly line to build units as orders are processed.

“Both will be products that are not available in the marketplace that have been designed around the use-profile of those client groups and markets,” Klope says. “As a company, we have matured and embraced the idea of offering a full complement of products with the flexibility and versatility to move from one unit to the other in the manufacturing process.”