Back to Profile Gallery > Morgan Innovation and Technology (Morgan IAT)

Passionate about innovative developments that are certain to make a difference in the world of tomorrow, Morgan Innovation and Technology has gained a solid reputation as a quality focused company that cares

Founded in 1987, Morgan Innovation and Technology (Morgan IAT) began with a specific focus on Howard Clarke’s innovative design capabilities; initially specialising in the development of medical products, the company began a partnership with a GP in the late 1980s, which resulted in the launch of its first lesion generator. Successfully sold to the NHS in 1991, the company’s product resulted in more advanced machines for the fledgling pain market throughout the 1990s.

As the treatment of pain has since become an integral part of any health system, the Neurotherm range of radio-frequency lesion generators for pain relief continues to be the company’s flagship range. Today commanding more than 50 per cent of the world market, Morgan IAT’s range is manufactured in the UK at the company’s site in Hampshire. “We sold the rights to the radiofrequency lesion generators a number of years ago, however, because we are experts in this field we continue to manufacture the equipment before it is sold around the world by a major American firm, Abbott, which is the latest company to acquire it,” explains Nigel Clarke, CEO of Morgan Innovation and Technology. 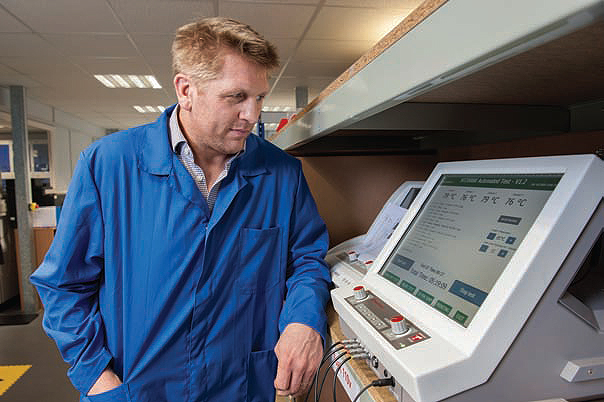 “Because our major market is America, a significant proportion of our turnover is export; we have always had a strong link with the American market, selling our product to customers, which they, in turn, sell globally. We have never had a problem exporting and are trying to open up more markets with the devices we are developing. However, it would also be nice to help our local UK market over the coming years,” says Nigel.

Having gained an enviable presence in the US, Morgan IAT was awarded its second Queen’s Award for Enterprise in International Trade in April 2016. Winning the UK’s highest accolade for business success twice, thanks to turnover growth from £1.8 million in 2010 to nearly £5 million in 2015, Morgan IAT aims to continue its trend of growth through a collaborative approach to business and an ongoing focus on R&D.

Indeed, over the years Morgan IAT has collaborated with a number of universities and medical schools to develop new ideas and concepts. By partnering with medical distribution companies, Morgan IAT has developed exciting and innovative new products such as the Menostat for endometrial ablation, an alternative to the hysterectomy operation, as well as a low-cost Diathermy machine for the treatment of cervical cancer. Additionally, the company has worked with companies such as Schering Plough and Coopers Blinds where large test machines for asthma inhaler production lines, asthma inhaler assembly machines and control systems for smoke curtain safety systems have been designed and developed.

Well-equipped to handle the many complex challenges of manufacturing high quality equipment, from beginning to end, at its modern facility in Hampshire, the award-winning company is currently working on a number of innovative projects. These include a user trial in Denmark due to start later this year on a patented concept, Salurate, which tests for pre-eclampsia and involves analysis of salivary uric acid; it is a cheap, simple and non-invasive test. In a small pilot study of approximately 130 volunteers, and a multi-centered clinical trial the test proved to be high in accuracy while also delivering significantly earlier detection in comparison to current methods of indication.

Key to this focus on innovation is Morgan IAT’s strategic decision to invest up to 20 per cent of turnover into R&D and ideas, as Nigel notes: “This commitment to investment began with the premise of getting a device to market within five years that would make a difference to society, with these ideas coming from either ourselves or other individuals who required investment. Through working in this way we helped to bring Pulseflow Technologies’ diabetic footwear, PulseflowDF to market and they have been selling this product since 2016.” Seeking a company to design and manufacture footwear to aid in the treatment of diabetic foot ulcers, Pulseflow Technologies had approached Morgan IAT with an initial concept and prototype. With the work taken on by Morgan IAT’s R&D department, the PulseflowDF was further developed and refined for manufacturing.

“Two years prior to getting PulseflowDF to market, our turnover was around 95 per cent export. However, with new products coming out such as Salurate we will continue to export as much as we can. We would like to establish products in our home market too. We are in talks to run Salurate trials in Africa and China, which is fantastic as this product will be a huge benefit to third-world countries as well as developed countries. Additionally, we are developing a Haptics glove for sensory rehabilitation that we believe has huge potential in the UK to help stroke survivors. We believe this glove will save a huge amount of money and help stroke survivors through rehabilitation while also improving their quality of life.” highlights Nigel.

As Morgan IAT continues to grow, the company is keen to not lose the values and ethos that have made it so successful. Moving forward, Morgan IAT will expand strategically and steadily while consistently ensuring its customers benefit from high quality, innovative products that make a difference.