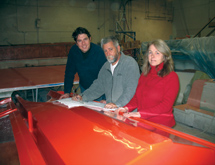 Morgan Huntley had been an avid boater all his life when he founded Morgan Marine Services about five years ago, but his personal interests weren’t his only motivating factor. Huntley says he believed there was a major gap in the market for fiberglass manufacturing in New England. With the experience Huntley had in boat building and the certified expertise he brought onboard to the company, Morgan Marine Services has grown into one of the region’s most trusted and successful fiberglass manufacturers.

A graduate of the Landing School of Boat Building and Design as well as the International Yacht Restoration School, Huntley says he understands the importance of quality fiberglass manufacturing when it comes to boat construction and repair. In 2010, Huntley acquired Vanquish Boats and relocated the boat manufacturer to Newport, R.I. Today, the core of the business is boat manufacturing, with boat and yacht repair making up the remainder of the company’s activity.

Huntley says Morgan Marine Services is dedicated to providing the highest-quality fiberglass construction possible. The company prides itself on the fact that all of its technicians hold American Boat and Yacht Council (ABYC) certifications, and that all of the work it does is completed to ABYC standards.

In everything the company does, Huntley says his experience as a boater and a boat builder drive him to ensure that Morgan Marine Services always does the job better than the rest. “I got into it because I couldn’t really find anyone to do it the way I wanted it,” he says.

One of the key elements to the company’s success has been the “semi-custom” nature of its boat manufacturing process, according to Huntley. He says the company aims to allow customer to make as many choices as possible, while still keeping its production costs manageable. “We separate ourselves on that side because we try to allow our manufacturing process to be as flexible as possible,” Huntley says.

The reasons why Morgan Marine Services and Vanquish Boats can offer that level of customization for customers are rooted in the company’s internal culture and scope. According to Huntley, the fact that the company is relatively small gives it capabilities that larger manufacturers can’t have because they are hindered by their size. “One of the advantages we have is that we’re small enough to still be nimble and we can make changes on the fly,” he says.

In addition to the company’s size, Huntley says its internal structure also results in high-quality construction. He says every employee is involved in the design and construction process, which makes it easier for management to work with the people on the production floor because there are clear lines of communication and everyone understands exactly what is going on at all times.

Because fiberglass manufacturing is such a specialized field, Huntley says Morgan Marine Services’ biggest challenge is finding people with the proper skills. He says continuing the company’s rapid growth without losing the high degree of technical skill that makes it special has been difficult, but it has been working around that problem. The company has hired people with skillsets close to what it requires, then relying on its in-house training program to bring them up to speed with the company’s standards.

Huntley says the addition of computer-aided design has done a lot to help the company and its employees maintain a high level of quality in its products and save time and money for its customers.

Although Morgan Marine Services just moved into a new facility in 2012, Huntley says he foresees another move for the company within the next five years, as a result of the demand for its services.

“We’re seeing tremendous growth in all our sectors,” he says.

As the company continues to grow, Huntley says that can be attributed to its ongoing willingness to go above and beyond the call of duty for its customers and exceed their expectations. “We don’t like to say ‘no’ – our goal is to say ‘yes,’” he says.