H.F.S. Morgan founded the Morgan Motor Company in 1909. The company announced itself with the production of the famous Morgan three-wheeler before producing a more traditional four-wheel variation in 1936. Since then the company has expanded, building more than 800 vehicles every year. 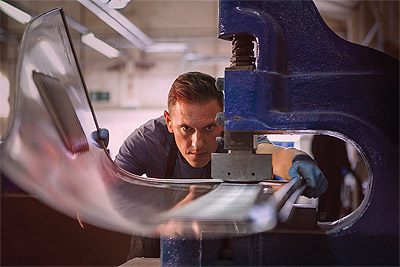 Craftsmanship
The Morgan website has a section dedicated to craftsmanship, highlighting the ‘Classic –Traditional’ way it sculpts cars with traditional materials prominently displayed in the background. According to the site, the three core elements behind each design are ash, aluminium and leather. However, while the company values this traditional principle, it is also coupled with an eye towards modern design. This is achieved using an in-house research and development department, where the challenge is balancing the hand-made approach, while at the same time ensuring those designs meet global standards and requirements.

The team ensures the vehicle operates and performs to Morgan’s high standards before release by using a process of digital simulation followed by physical testing. This applies to both experimenting with ideas for new designs while also building on, and uplift of, existing models. The company also works closely with vehicle owners and builds on the feedback received, improving the specifications of a vehicle as required.

Build
The building process of each vehicle is treated with the utmost care – technicians handle the building of the chassis by hand, making sure that engines, gearboxes and package configurations are housed in a structure that is designed to be lightweight and high performance. This is then taken to the woodshop where the ash framework is added. This material is used not just because of a desire to use natural materials but also for practical purposes, with ash proving to be lightweight, durable, flexible and an effective form of vibration dampening. This is then taken to the ‘tin shop’ whereby the team employ traditional techniques using lightweight aluminium on the panels of the Morgan, a design known for its free-flowing look.

The customer can choose to have their vehicle painted from an impressive array of 40,000 different options. The vehicles are hand sprayed in an airtight booth in order to maintain consistency and remove any imperfections. This combined with an impressive leather trim finishes off the look. However, after this is assembled the process is not finished – the vehicle has to go through a pre-delivery inspection (PDI) process to check that everything is working before getting in the best possible condition with a three-stage polish.

Drive
The benefit of these processes can be seen in the style of the finished vehicles. For example, the classic Roadster has a Great Gatsby-esque quality to it, providing a retro look, while at the same time still providing the safety and reliability that people have come to associate with this brand. With its own series of Roadsters, the Morgan brand can also boast some impressive speed as well. This performance was tested in a specific and unusual way in April this year when a Morgan Aero 8 was pitted against a Pitts S2S Muscle Biplane in a race on Bruntingthorpe Airfield. The origin of this unusual race goes back to a comment by the World War 1 fighter pilot Albert Ball, who stated that the Morgan Three Wheeler was: “The closest thing to flying without leaving the ground.” 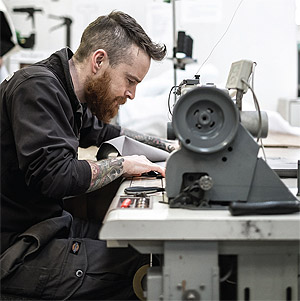 The race was a fascinating face-off between Morgan’s head of design Jon Wells and aerobatic stunt pilot Richard Goodwin, and the result can be seen in an exhilarating video on the company’s website, something that Jon was clearly thrilled to be a part of. “Statistically we were both equally stacked. I am familiar with the impact of launching an Aero 8 from stationary to 150MPH, but what I hadn’t anticipated was the experience of a backdraft of an insanely powerful prop engine pointing right at you,” he enthuses, clearly still buzzing from the experience.

While the race was a fun one-off (and looking at the video it is difficult to see who won, though it was thrilling to watch) it is just one example of how Morgan spreads the word about its unique product. Another example was the ‘Run for the Hills’ event in August, where Morgan celebrated 100 years of its vehicles with 6000 owners at the Malvern Three Counties Showground. The event proved popular, as Managing Director Steve Morris recalls: “We are blown away by the unrivalled passion that owners and enthusiasts have for the marque. We welcomed 1500 Morgans home, from early ukpre-war cars to the latest production models. The strong attendance of the event and superb atmosphere throughout the weekend is a signal of great strength for the Morgan community. On behalf of the Morgan family, directors and staff, I would like to thank all those involved in helping to make the event a success. We are already looking forward to the next event!”

It is that last sentence that resonates when it comes to describing the enduring appeal of the Morgan brand. The vehicles are produced by a family and there is a sense of genuine pride and love behind the creation of its vehicles that extends beyond the materials and the specifications. If the company can maintain its high standards then it is likely we will be seeing more top quality work from Morgan for some time to come.