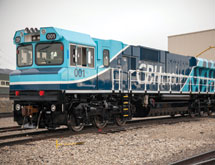 When operating as a locomotive manufacturer, a company has to stay on top of the latest updates in manufacturing technology. MotivePower Inc. has had this philosophy in place since its founding in 1972, when Morrison Knudsen launched the rail systems group out of a facility in Boise, Idaho.

“We look at new technologies throughout our manufacturing operations and on a constant basis make capital improvements in new and improved tooling,” according to Manufacturing Engineering Manager Eddie van Hout.

MotivePower Inc. is a subsidiary of Wabtec Corp., a global provider of value-added, technology-based products and services for the rail and transit industry. MotivePower is an industry leader in the design, manufacture and remanufacture of diesel-electric locomotives. The company has manufactured more than 2,500 locomotives at its 300,000-square-foot facility in Boise.

Along with housing the capabilities to manufacture new locomotives, MotivePower also can provide complete overhaul, upgrade and testing services including all support systems in their entirety. MotivePower offers design, application and systems integration engineering, manufacturing and servicing of locomotives, and project manager services. Its capabilities include manufacturing of commuter, freight and switcher locomotives, locomotive overhauls and modernizations, OEM locomotive components, contract fleet maintenance and emissions-reduction applications.

To stay up to speed with the latest technological advances, van Hout says MotivePower invests in new equipment and new processes. The company is considering implementing automated welding and testing of subassemblies of fully equipped locomotives. MotivePower already has made major investments in modular tooling, which significantly improves the company’s ability to build these components quickly and with a high level of precision.

“We have quality employees and a dedicated welding engineer on staff, who is responsible all weld processes,” van Hout says.

The company typically fields requests for bids from its customers before manufacturing begins, and it works closely with them to develop the best possible product. MotivePower handles all design work internally through its on-site design engineering staff. MotivePower’s own manufacturing engineers are involved with the process to ensure manufacturability of the product.

MotivePower then builds a pilot locomotive off the new design. Once the company has completed the first unit, that pilot unit is used to troubleshoot any unforeseen issues not caught in the design phase. Once the pilot unit is up and running properly and it meets customer specs, it is shipped to the client.

“We also use suppliers for development and machining operations,” van Hout says. “We purchase components from outside weld shops and machine shops, as well.”

To manage inventory, the company utilizes an Oracle ERP system, placing purchase orders with its vendors for large-scale items and components. For smaller items like bolts and nuts, MotivePower relies on vendor-managed inventory.

MotivePower also uses the Wabtec Performance System, which is based on traditional lean manufacturing models. Training involves two mandatory classes for all employees, along with classes based on roles or departments. For instance, welders must be certified in materials, upwelds and techniques based on their specific work cell.

“People in our equipment shops get more specific training based on the area they’re working in,” van Hout says. “Some of it is formal classroom training, and some of it is on the job or in a work cell. Others work with a senior employee, especially if they’re getting cross-trained.”