Back to Profile Gallery > Nanosphere 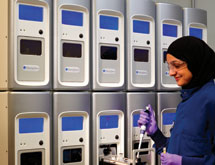 Manufacturing is generally thought of on a grand scale – hundreds of employees working in large spaces in excess of 100,000 square feet on massive machines and assembly lines, producing sizable products.

For medical diagnostic testing manufacturer Nanosphere, the scale of its work is quite different. “Everything we deal with here is tiny,” says Bill Moffitt, president of the Northbrook, Ill.-based company.

As its name suggests, Nanosphere specializes in manufacturing a molecular diagnostic platform based on the use of gold nanoparticle technology. This platform – the Verigene system – allows for the testing of highly sensitive nucleic acid (DNA and RNA) and proteins on a single platform.

“Our nanoparticle technology enables us to produce a diagnostic test that can detect many targets at the same time in one sample,” Moffitt says. “The nanoparticle probe exhibits certain characteristics that make it highly selective in terms when it comes to finding a special target of interest against a background of billions of molecules in a sample.”

The Verigene system consists of two main components – an electromechanical reader and processor instrument, and the testing cartridges it reads and interprets. While the company produces one main version of the instrument itself, the testing cartridges – within which a blood, nasal swab or portion of a stool sample is placed – vary based on their use.

Nanosphere has a number of tests both on the market as well as in clinical testing. In December 2012, the company received clearance from the FDA to market its newest test, which can detect C. difficile, a gastrointestinal infection.

Clinical applications for Nanosphere’s tests include detecting infectious diseases, cardiovascular diseases and genetic testing. The company was the first to have a test for sepsis cleared by FDA. The Verigene system also can be used to test how patients metabolize drugs, allowing physicians to tailor treatment to each individual, Moffitt says.

Nanosphere’s systems can be found in commercial and hospital diagnostic laboratories. The company’s technology helps hospitals improve patient care by providing information rapidly and detecting many targets on one test. The testing cartridges used in the system are inexpensive to produce, with the plastic parts used in each costing roughly $6.50 to source. This savings is passed on to the customer, as the Verigene system costs significantly less that conventional diagnostic testing methods, Moffitt notes.

“Doctors and clinicians can use our equipment to get a complicated test result very rapidly and inexpensively,” he adds.

Each testing cartridge is 1 inch wide by 1.25 inches high and 3 inches long. Each contains a microarray, which is a series of printed spots that contain short, artificially produced strands of DNA that are complimentary to and unique from the DNA in the sample being tested. Each cartridge also contains a colloidal gold nanoparticle probe, Moffitt notes.

Nanosphere’s manufacturing process in its Northbrook headquarters consists of instrument and cartridge assembly as well as nanoparticle production and DNA synthesis. Cartridges are assembled from plastic injection molded parts produced and provided by a supplier.

“I’m obviously quite proud of the technology we use here, but the thing I think I’m most proud of is the ability of our reasonably small team of people to take a science from the research bench and fully develop it, along with a unique manufacturing process, to create a device that has a significant impact on diagnostic testing,” Moffitt explains.