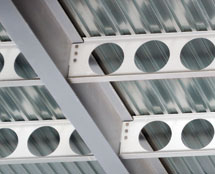 It’s not apparent by looking at the amount of regional growth and technological innovation it has seen in the past few years, but New Millennium Building Systems, a wholly owned subsidiary of Steel Dynamics Inc., is a member of two of the industries hit hardest by the economic crash: steel production and non-residential construction.

From 1999 to 2007, the manufacturer of steel joists, metal decking and castellated beams for non-residential construction built and acquired five U.S. plants. After the 2008 crash, the company idled two of its plants to align with market demand.

Then, in 2010, New Millennium saw an opportunity to revive previous plans for a westward expansion. Commercial Metals Co. (CMC) announced it was exiting the steel joist manufacturing market, and New Millennium mobilized to acquire three complete operations – land, facility and equipment – in Fallon, Nev.; Hope, Ark.; and Juarez, Mexico. It bought equipment from four other facilities in Iowa, Pennsylvania, South Carolina and Florida.

The deal closed in October 2010, and Juarez  was in production the next month. The company developed a western sales force that also covers western Canada. A revamped Fallon plant launched in September 2011 and the renewed Arkansas plant came online a month later.

“The addition of these plants to the New Millennium network will allow us to efficiently reach markets we could not previously serve and will allow us to better serve our customers that have a nationwide footprint, such as major retailers, structural-steel fabricators, and design/build firms whose projects span the continent,” President Gary Heasley says. “Previously, our more limited regional coverage had made serving these accounts challenging.”

New Millennium’s new nationwide expansion is matched by an expansion of product and service innovation. It may not be the largest steel joist, metal deck and castellated beam manufacturer in the business (the company is presently the second largest), but it does lead in the way of customer-centered research and development.

In early 2010, New Millennium released the Dynamic Joist® BIM component, making it the first steel joist manufacturer to develop a joist-specific BIM design tool. The Dynamic Joist BIM component contains steel joist configurations, specifications, material components and design requirements that can be used from the planning room to the jobsite.

It’s a tool that architects, fabricators, contractors and owners can use to make their job easier, which is New Millennium’s main goal – and the sole objective of yet another breakthrough. At the 2012 North American Steel Construction Conference in April, New Millennium announced a new series of online, digital joist specification tools, enabling specifying engineers to more easily design and specify steel joists and joist girders.

“Specifying engineers who are accustomed to searching multiple catalog tables for various steel joist criteria will find the new digital tools much easier and faster to use,” states Joe Pote, director of research and development, who also reveals the company is developing similar solutions for metal decking and other product lines. Early reaction to the new tools has been very positive, and the company is already incorporating requests from specifiers for added features that will save time and money when specifying steel joists and metal decking.

“Customers are looking for value-engineering and fast turnaround,” says Rick Sugg, sales manager of the Fallon, Nev., plant. “Because if a developer or company has a distribution center that they want to pull the trigger on to get product flowing, they want it done as soon as possible. They need it done fast and accurately.”

The new tools also facilitate partner-based relationships, which are important to New Millennium. “A key competitive advantage we have is staying creatively  ‘Flexible to the Finish,’” Sugg explains. “We are flexible all the way through the process. We are not afraid to sit down and try new ideas. The first thing we ask is, ‘What do you need and when do you need it?’ We are sincere about building relationships with these customers for a long period of time. And when there are issues – because in construction there are often issues – we respond quickly.”

Flexible Model for the Future

To deliver on the promise of fast, accurate and collaborative services, New Millennium needs its manufacturing process to be as efficient as possible. With modern equipment and lean processes, it turns steel into finished products at less cost.

Art Ullom, general manager at the company’s Butler, Ind., plant, says the company’s culture of flexibility is centrally important to how New Millennium supports its customers.

“We’ve focused as an organization on efficiently solving customer problems,” Ullom explains. “This is the reason we developed the industry’s first special profile steel joist catalog, offering greatly expanded specification tables for easier specification of unique rooflines. It’s why we were the first to offer a BIM-based joist design tool, and why we have added castellated and cellular beam production. It’s also why we have now introduced the first online set of digital specification tools for steel joists and metal decking.”

“We don’t talk about waiting for a recovery of construction,” Heasley adds. “Our view is that it doesn’t matter what happened in 2006 and 2007. What matters is what’s happening today. We are a tremendously efficient, restructured company, able to serve our customers from coast to coast, and with the flexibility to add capacity based on demand.”