Back to Profile Gallery > Niesmann Bischoff

What started in 1955 from humble beginnings with Elfriede and Hugo Niesmann selling caravans, has grown into a first class manufacturer and dealer of luxury motorhomes. As a result of the innovative drive of the family pair, developments took place, and by the late 1950s it was declared the most important German caravan manufacturer of its day. To celebrate this milesone Elfriede and Hugo invested company profits into a 4000 square metre large exhibition site near Koblenz and employed two members of staff to run the shop floor. The company 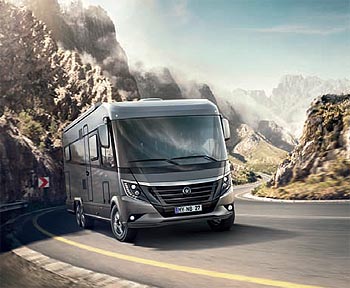 grew from strength to strength, ticking off one milestone after another over the next two decades. In 1975 it became the largest US importer of motorhomes but it was forced to discontinue its US efforts due to the rising dollar. This could have resulted in the company being forced into ceasing to trade, but thanks to continual and controlled evolution and a drive to succeed this was not the case for Niesmann Bischoff. New models were manufactured, sales increased in Europe, a new plant was built and eventually in 1996 it became part of Hymer AG, one of the largest manufacturers of motorhomes and caravans in Europe.

Today Niesmann Bischoff ’s headquarters and production site is located in Polch in Rhineland-Palatinate, in Germany with 240 employees. It produces around 650 high quality, innovative and comfortable luxury motorhomes every year, that sell from between £90,000 to £200,000 each, to a worldwide market. In the last three years the company turnover has trebled.

Niesmann Bischoff is famous for innovative automotive design and first class workmanship. It takes care of all aspects of the manufacturing side of the business and dealerships sell the motorhomes to customers. The renowned leader has gained an excellent reputation for the delivery of world-class products by encouraging clients to visit the facility to see work in action and witness first hand the level of quality and services on offer. All processes are exceptionally taken care of, from design, to sales and delivery, through to aftercare.

Niesmann Bischoff is about to launch its most recent development, the revolutionary low profile model called the Smove, which took three years of expertise to develop from start to finish. The striking ClouLine design makes the model look and feel sporty. It boasts luxurious style, looks good on the eye, and excels at quality and some never seen before features including being the first semi-integrated motorhome, which looks like a liner; with the dynamics of a car. It has the ability to take on road bends unlike any other motorhome. It’s perfect for long distances due to its comfort and purpose and is great for closer to home journeys due to its slim line dimensions and high movement. The excellent Smove has numerous style and quality features that include a three-dimensional design, a double floor with Styrofoam insulation and a generous amount of inside space with all the mod cons expected from its consumers. It was designed with two very different kinds of customers in mind. The first, the 30-35 years old couple with a disposable income that love to city hop around Europe and the second the older married couple 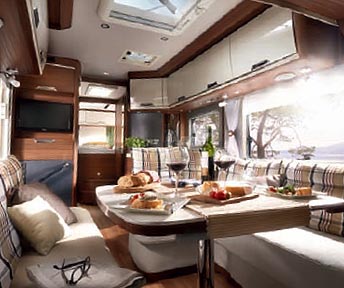 who enjoy the finer things in life and like playing golf around Europe.

Recent great achievements for the company come in the form of awards. The Flair LF was voted Luxury Motorhome of the Year 2015 by the UK’s best selling motorhome magazine Motorcaravan Motorhome Monthly (MMM). In the same year, Which Motorhome, the number one magazine for motorhome tests also awarded it the luxury Motorhome of 2015 for its superb looking exteriors and interiors. The award was highly sought after, as it’s the magazine that potential consumers use when deciding what model to buy. The international expert jury of the Plus X Award 2017 awarded the Flair for an impressive four awards. It received awards for high quality, design, operational convenience and functionality. Hubert Brandl, Managing Director of Niesmann Bischoff said in a press release about the win: “This acknowledgement underlines that the popularity of the Flair is still very high – in particular as we had not actively applied for the award, but rather were nominated by the jury. To be awarded for our work in not one, but four areas is a top result. Our whole team can be proud of this.” The model also collected awards from the Red Dot 2015 for high design quality and the top prize from the German Design Award 2017 in the transportation category for outstanding design quality.

Niesmann Bischoff ’s success is further highlighted by its waiting list. It has already closed production for this year and is busy taking orders for manufacturing and sales for 2018. So what lies ahead for the fast moving luxury motorhome manufacturer? In the years to come it will design, manufacture, sell and deliver more and more outstanding models. Owning a Niesmann Bischoff motorhome is a travel status symbol for the luxury market.