Back to Profile Gallery > Nitta Corporation of America 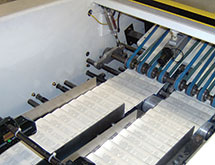 In 1885, Nitta Corporation entered the Japanese manufacturing market with its first product, a power transmission belt made of leather. Although simple belts such as this initial product remain the company’s core competency today, Nitta Corporation has built a strong reputation as an innovator. That reputation followed it into the United States market in the 1970s and the establishment of Nitta Corporation of America (NCA) in 1980.

Based in Suwanee, Ga., NCA continues to serve industrial customers throughout North America with the same commitment to quality and innovation as its parent company. President Kim Millsaps says the company has a global reach but is one of the few global manufacturers of power transmission solutions that can offer North American customers a direct connection to its products.

NCA serves numerous industrial markets with engineered solutions that meet each customer’s specific needs. Millsaps says this puts the company at an advantage over manufacturers whose products are closer to the commodity level. The markets in which NCA has its strongest position include textiles, paper manufacturing and printing, although it does serve other markets. The company’s primary product line is industrial power transmission belting, but it also produces hoses, tubing and fittings, and wipers.

No matter what it produces for any of the market segments it serves, Millsaps says NCA concentrates on producing engineered solutions that are more than a one-size-fits-all product. “These are what we call engineered products,” Millsaps says. “They are not in what we would call the commodity realm.”

NCA delivers these solutions thanks in large part to its focus on the end-user rather than only concerning itself with meeting the requirements of its OEM customers. This focus is referred to within the company as “The Nitta Advantage,” and involves working closely with end-users’ management and technical teams to identify the right product for each application. “We don’t just go to the OEM, we focus on the end-user to update their technology and improve their overall efficiency,” Millsaps says.

The company’s presence in the United States helps make this possible, and Millsaps says the company has concentrated on adding new product lines ever since it entered the North American market. These include PolyBelt, the company’s nylon-core skive-splice belt that is typically used for power transmission belts, carrier belts and machine tapes. The company says PolyBelt offers superior resistance to fatigue and can be joined together quickly for greater efficiency. NCA is the only vertically integrated domestic manufacturer of nylon core belting, providing customers with greater price stability, faster delivery and greater flexibility.

Millsaps says the company also is proud to be the  leading domestic manufacturer of flat aramid-cord products, which it manufactures under the Carryflex brand. Encapsulated in urethane and rubber, Carryflex offers a flexible but rugged design that resists fraying and will not stretch even at above-average lengths. NCA added Carryflex to its product lines in 2000, when the company introduced its first aramid-cord machines in the U.S.

In the past six years, NCA has added another new product line to its repertoire, this one imported from its parent company’s production in Japan. The PolySprint line of polyester-core, finger-spliceable belting requires no adhesives to join, making it an easier-to-install and easier-to-service alternative to belting products typically used in the printing and graphic arts sectors. Vice President of Operations Kent Simpson says production of PolySprint has quadrupled in recent years, thanks in part to NCA’s contract with the U.S. Postal Service.

Millsaps adds that the PolySprint line has given NCA a much broader customer base in the United States. “It gives us a completely new opening into the printing industry that we haven’t been able to enter in the past,” Millsaps says.

Foundation for the Future

It’s very likely that NCA will continue to add to its business in the near future, as the company recently received the green light from its parent company to nearly double its footprint in the United States. Simpson says the company will soon add more than 85,000 square feet of warehouse, office and production space to its facilities in Georgia. This will allow NCA to begin domestic production of PolySprint by late 2016.

As Nitta Corporation marks its 130th anniversary this year, NCA is gearing up to celebrate the event by spreading the word to its distributors and end-users that its global connections and innovation are its greatest strengths in North America as well as the rest of the world. “130 years in existence with continual improvement to our product lines is going to be a very significant milestone for Nitta globally,” Millsaps says.