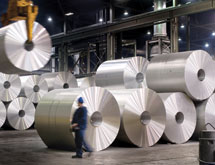 “We have a simple strategy,” Noranda Aluminum Holding Corp. CEO Kip Smith says. “We want to make each pound of aluminum at the lowest possible cost, and sell it for the highest premium available in the market.”

Smith, who became Noranda’s CEO in March 2008, says its strategy is tightly wrapped around three tactical choices. First are the company’s integrated, strategically located, globally competitive assets in the United States and Jamaica.

Second is its passionate focus on productivity. And third is a goal to sell every pound of aluminum as a value-added product.

“We are integrated from red dirt to aluminum foil,” Smith says, summarizing the scope of operations that Noranda divides into two businesses. The company’s upstream business produces 13 percent of the primary aluminum consumed in the United States. Its downstream business is a leading producer of aluminum foil and light-gauge aluminum sheet in rolling mill facilities located in Tennessee, North Carolina and Arkansas.

Noranda’s bauxite mining operation in Jamaica is the closest source of bauxite to the mouth of the Mississippi River, near the company’s alumina refining operation in Gramercy, La. Alumina travels by barge from Gramercy to Noranda’s aluminum smelter in New Madrid, Mo.

Across its integrated business, more than 95 percent of Noranda’s products are delivered into the United States. More than 75 percent of its primary aluminum volume is delivered to customers within a one-day truck delivery distance, and in the downstream business that number is close to 65 percent.

“Our United States and Jamaican geography is important to our integrated strategy,” Smith says. “The proximity of our assets to one another supports productivity, and their proximity to our customers supports our value-added sales strategy.”

Smith added that the company’s location also provides proximity to the sources of supply for many of the key raw materials which are not integrated. These include carbon-based and chemical products, and natural gas, where the company enjoys good relationships with industry-leading suppliers.

A Passion For Productivity

Though confessing that he doesn’t like to think about the fact that 35 years have passed since he graduated from university, Smith acknowledges he has learned many lessons through his experience across numerous commodity cycles.

One of those lessons is the importance of having a secure supply of key raw materials. Another is the value of instilling a strong productivity mindset throughout an organization. “We are integrated in the upstream business for security of supply and a broader ability to influence our costs,” Smith says.

“We have a passion for productivity,” Smith declares. The company uses its CORE program (“Cost Out, Reliability and Effectiveness”) to channel that passion into a project-based framework to control costs, de-bottleneck capacity constraints and improve reliability at the company’s production facilities.

According to Smith, Noranda’s CORE projects fall into three broad categories. The first is the do-it-better category – small-scope process changes that require little or no capital. For example, smelter engineers recently increased the size of the anodes in one of the smelters three pot lines from 61 inches to 63 inches. This change required essentially no capital, just experimentation, process modification and great teamwork. The benefit was reduced voltage, increased amperage and $1 million in annualized savings.

Second is the better-tools category – projects requiring modest capital, and provide employees with additional tools to either drive out costs or improve operational reliability and effectiveness. In one of its rolling mill facilities, for example, the company recently installed an internally developed graphite-spray system where a team of engineers and equipment operators came up with the idea and aided in the design. The new system improved quality, improved reliability and reduced graphite usage, generating more than $100,000 of savings in its first quarter of operations.

Third are major projects that require meaningful capital and extend over several quarters or years. As an example, Smith describes a $2.5 million project to replace a piece of equipment that slits larger pieces of foil to allow for processing into thinner material. This slitter project allowed that facility to meet the needs of certain product groups, which it previously could not serve in a cost-effective manner.

Smith also cites a $38 million investment at the smelter as an example of the company’s commitment to productivity. During late 2010, Noranda re-launched a project at the New Madrid smelter to improve operating reliability and to expand aluminum production capacity by approximately 35 million pounds.

With a remaining cost of $38 million at the time it was re-launched, the project involves a combination of additional rectifiers and upgraded equipment, allowing for increased amperage and more efficient utilization of electricity. These efficiency gains are particularly important for the company because electricity is typically the largest individual cost in producing aluminum.

Although a basic output of any aluminum smelter is a product known as commodity grade ingot, Noranda has production capabilities that allow it to add alloys to the metal and fabricate it into different shapes. These shapes, which Noranda refers to as value-added product, are sold at a premium to the commodity grade aluminum price.

“We strive to sell every pound of primary aluminum as a value-added product,” says Smith. “We make this choice not only to earn additional margins, but also because it strengthens our ties to the consumer market.”

These value-added products come in several forms. In the primary aluminum segment, the two mainstay products are extrusion billet and redraw rod. Noranda enjoys a meaningful share of the U.S. market for these two products, supplying approximately 29 percent of the redraw rod and 13 percent of the extrusion billet produced in North American primary smelter casthouses.

Extrusion billet is shipped by Noranda in a form that looks like an aluminum log. Customers soften the billet in their own production processes and form the metal into desired shapes.

In July 2012, Noranda announced plans to move forward on a $45 million investment to build a new rod mill. That project includes infrastructure development and construction of a new mill to produce redraw rod. The company expects spending on the project to begin in 2013, and full production to be realized in 2015.

Noranda’s downstream operations, Smith notes, manufacture aluminum foil and light-gauge aluminum sheet. These products include heavy gauge foil products such as fin-stock, which is used in the manufacture of HVAC equipment, or semi-rigid container stock, which are used in pans for cooking. The downstream product line also includes household aluminum foil and other light gauge foils used in consumer products packaging, as well as light-gauge sheet products employed in transformer windings and building products.

Referring to a philosophy the company refers to as “winning with winners,” Smith says, “Our growth is led by the quality of our customer base – customers who are well positioned to grow because they are leaders in their respective industries.

“We enjoy a strong portfolio of growth opportunities in large part because of our strong customer relationships,” Smith says. He explains that Noranda’s operations and sales teams have built these relationships over years, and in some cases, over decades.

Smith sees a variety of growth opportunities in the United States and Jamaica – not only for Noranda, but also for the aluminum industry and U.S. manufacturing as a whole.

“Primary aluminum is adaptable to a universe of applications because of its metallurgical properties and environmentally friendly attributes,” Smith says, noting that these properties include its light weight and its recyclability. “Aluminum is essentially infinitely recyclable, with no loss in quality – ever.

“The focus on energy productivity in the U.S. helps align us with one of the catalytic trends for the manufacturing market today,” he says. As an example of how aluminum is both driving and benefiting from these trends related to energy productivity, Smith points to developments in the automotive industry, where the amount of aluminum per vehicle has increased in recent years.

Likewise, Smith points to how in the field of electricity conductors new power cable designs employ significantly more aluminum per cable foot. “We are bullish about aluminum demand both in the near-term and the long-term,” Smith says.

Smith is not only bullish about aluminum demand. He’s also optimistic about the future of manufacturing in the regions where Noranda operates and about the role that aluminum can play in that future.

“There is this idea that ‘nothing is made in America anymore,’” Smith says, “and that all our manufacturing jobs have vanished.” While acknowledging that over the last six decades, U.S. manufacturing has been declining relative to the overall economy, he attributes this decline more to rapid growth in other sectors such as services, than to an irreversible decline in U.S. manufacturing.

“I believe that sentiment is overblown,” he declares, citing data from a recent Bank of America Merrill Lynch report that shows that the United States manufacturing sector is equivalent to the ninth-largest economy in the world.

Smith believes there are five ingredients necessary for this resurgence: a productive workforce; available cost competitive power; a constructive, consistent and interactive regulatory environment; a national infrastructure that supports the physical needs of manufacturing commerce; and a society that prizes manufacturing as a foundation for a vibrant economy.

Although Noranda became a standalone company in 2007, the company’s roots extend back several decades. For example, the New Madrid smelter recently celebrated its 40th anniversary of operations.

Starting as a small subsidiary of a metals and mining conglomerate, Smith says the company had quality assets, an engaged work force and long-standing relationships with customers. But Smith says that to remain viable in a globally competitive market, and to thrive as an independent company, Noranda needed to change.

“Our actions to reposition and strengthen Noranda were done with a disciplined focus to do the right things, the right way and to get the results,” says Smith referring to what he calls Noranda’s “Two Number One Priorities.”

“We want a company that not only achieves financial success in the short-term, but will also be here in 100 years – to provide high quality manufacturing jobs for several generations to come,” Smith says. “It’s really all about making Noranda the company we always wanted to work for. We have 2,500 families that depend on us getting it right.”

That 100-year horizon was on display with banners hung in each facility in May 2012 as part of celebrating Noranda’s fifth anniversary as a stand-alone company.