Back to Profile Gallery > Noranda Aluminum 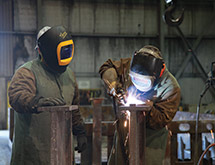 “We compete regionally on the basis of product and service, and we compete globally by having low cost assets that can sustain price volatility that is inherent in any commodity,” CEO Kip Smith says.

Noranda’s roots go back to 1968 with the development of the New Madrid aluminum smelter, located at a strategic mid-U.S. distribution point on the west bank of the Mississippi River. The rod mill, supplied with purchased aluminum metal, started initial production in the fall of 1969, and the reduction plant first produced aluminum metal in February 1971. Phase II of the reduction plant was completed and metal production started in 1976, with Phase III completed and the first metal tapped in July 1983. Further improvements came in 1999 with the construction of new rod mill and a facility to produce anodes, the large carbon blocks which act as electrical conductors, allowing the smelting process to take place.

Noranda also established a flat-rolled products business in 1979 after the purchase of the Archer aluminum foil plant in Huntingdon, Tenn. In 1989, that business grew with the acquisition of National Aluminum’s foil business with plant locations in North Carolina and Arkansas. In 1996, the company commissioned the world’s first thin-gauge continuous caster in Huntingdon, and the completed the construction of a $238 million modern foil plant in Huntingdon in 2001.

After Xstrata acquired Noranda Inc. in 2006, Noranda Aluminum was spun off as a stand-alone company because Xstrata had no other aluminum operations. In May 2007, private equity fund manager Apollo Global Management led the purchase of Noranda from Xstrata in a leveraged buy-out. Noranda completed an initial public offering (IPO) in May 2010. Apollo’s private equity funds completed the sale of their ownership in May 2015.

Noranda’s is a simple strategy that is centered on its role as a U.S.-based integrated producer of primary aluminum. The company strives to optimize its aluminum production to match market demand, to produce each pound for the lowest-possible cost, and to sell it for the highest available premium.

“We implement that strategy through a number of effective, complementary tactical choices,” Smith says. “We choose to be integrated, to manage our costs through a passionate focus on productivity, and to strive to sell every pound of primary aluminum as a value-added product.”

At present, Noranda’s focus in implementing that strategy is to optimize its existing footprint and reduce the level of aluminum prices necessary to generate positive cash flow.

A number of demand-related, supply-related trends and economic-related trends are currently impacting Noranda’s operations. From a demand perspective, the applications for aluminum have grown, increasing demand. Aluminum is strong, lightweight and infinitely recyclable, making it a vital material in the modern world.

Aluminum is being used in more innovative applications, and manufacturing with aluminum lowers energy costs and carbon emissions for dozens of end-use applications. In addition, emerging global economies are poised to enter a rapid period of industrialization, population growth and urbanization, which will likely lead to a significant increase in aluminum consumption.

Because of this, Noranda is seeing increased demand in its market segments. In the building and construction segment, there is more demand for extrusion billets.

The supply-related challenges facing Noranda mainly stem from the growth of China as a production hub. China now produces more primary aluminum than the rest of the world combined. Outside China, most major aluminum producers have closed high cost capacity in a bid to improve cost positions, while a number of marginal producers have been declared bankrupt in recent years.

These closures have been offset by a number of new projects coming on-stream in the world outside of China so that production in 2014 was flat compared to 2012 levels. While the rest of the world has managed its production so that it either matches or is below consumption growth, China has exceeded the growth rate of its domestic consumption.

Then there are the economic-related trends. Primary aluminum is a global commodity, and its price is set on global exchanges. Because aluminum consumption is seen as a proxy for global economic growth, aluminum prices are very sensitive to changes in expectations about global economic activity.

Market participants have become increasingly bearish on aluminum, particularly beginning in the second quarter of 2015. Weaker Chinese demand growth and low metal prices has rattled investors. Aluminum prices are currently at their lowest levels since July 2009, a time when the world was coming out of the global financial crisis.

“In order to close the gap between aluminum production and consumption, it will likely be necessary for a significant amount of aluminum production to be curtailed,” Investor Relations Vice President John Parker says. “If that doesn’t happen, aluminum prices will remain below sustainable levels until producers somewhere in the world are required to take action in order to avoid significant cash losses.”

A number of key investments and initiatives have been on the table for Noranda recently. The company has always had a highly effective productivity program, which it calls CORE (Cost Out, Reliability, and Effectiveness), to help manage costs and offset the impact of general price inflation. But the company knew it needed to do more to make a step change in profit and cash flow generation to operate sustainably, particularly in the lowest part of the commodity cycle.

To create that necessary transformation of its cost structure, Noranda initiated a three-year productivity program designed to increase its pre-tax profitability by $85 million independent of changes in commodity prices. This was well beyond what it had achieved in previous productivity programs.

“Through June 2015, we have either realized or begun to realize savings that provide 55 percent of that $85 million three year productivity target,” Smith says. “We have made substantial progress on another 18 percent of that target.”

With what Noranda has accomplished and what it has remaining, it has a clear path to a cost structure where it can generate positive free cash flow at a per-pound aluminum price in the mid-1980s—a dramatic transformation compared to the $1.05 it needed in 2013.

Through reduced electricity rates in New Madrid, the company has found savings of $17 million to $25 million. In addition, three capital projects have been focused at producing savings of $20 million. First, in March 2015 Noranda completed a project to increase the depth of the dock berth and shipping channel in Jamaica in order to drive $5 million of annual savings from lower freight and shipping related costs in its alumina and bauxite businesses. This project required an $11 million investment.

Next, this October Noranda expects to complete a project to reconfigure the bauxite unloading infrastructure at its alumina refinery in Gramercy, La. The company is also in the process of constructing a new state-of-the-art mill to produce re-draw rod at New Madrid, increasing the percentage of New Madrid’s metal that is used to produce value-added primary aluminum products.

Finally, flat-rolled products debottlenecking and labor efficiency initiatives have been aimed at producing savings of $10 million and $15 million respectively. By debottlenecking the operations of its flat-rolled products business, Noranda has been able to optimize production while driving out costs. And from a labor perspective, Noranda initiated a company-wide workforce reduction in December 2013 to capitalize on labor efficiencies gained throughout the company.

Going forward, Noranda is focused on preserving cash and liquidity as it works to operate more reliably and to realize the full benefit of its productivity efforts. The company is taking the actions necessary to alter its cost structure so it can prosper well into the future.

“We are transforming our company,” Smith says. “It’s what great commodities companies do in the trough of the commodities cycle.”