Back to Profile Gallery > Norican Group 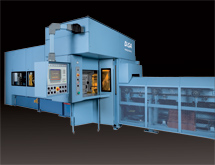 If there is a metal component to a product, there’s a very good chance Norican Group has been involved in some way. President and CEO Robert Joyce says the company services more than 15,000 active customers in just about 100 countries, from global market leaders to small, local operations.

The company’s worldwide reach and significant local capabilities mean Norican Group can get involved virtually anywhere along the supply chain for components.

For example, Joyce says, nearly seven out of 10 disc brakes manufactured in the world are touched by Norican Group equipment at one point or another. Foundries in almost every part of the world have come to rely upon Norican Group’s technology and expertise, and Joyce says the company aims to keep it that way.

Norican Group was created by the 2008 merger of two market-leading manufacturers. Wheelabrator had been serving the foundry industry with surface preparation equipment since 1908, producing equipment designed to clean, polish and strengthen metal components through the use of abrasives. Danish manufacturer DISA had been producing metal casting production solutions for ferrous and non-ferrous foundry customers since 1900. The merger between these two companies created a global manufacturer with the capacity to provide solutions for virtually any foundry application. “We play all along that value chain,” Joyce says.

Joyce describes Norican Group’s customer base as including many of the global Fortune 1000 list, spanning multiple sectors in every region of the world. The one thing they all have in common, though, is the fact that they rely on Norican Group to help them with metal part creation or fabrication. “The way we think about our business is, whether it’s the parts formation phase or the parts preparation-phase, what is common among all our customers is they work in metal to create a component or create a part,” he says.

Because the company has a strong presence around the world, Norican Group’s competition naturally is varied. Joyce says the company faces competition across three tiers. The first is made up of multinational players like itself, while the second consists of smaller companies competing in localized markets. The third tier, although the smallest, represents a persistent challenge for Norican Group – customers insourcing the production of their own spare parts. Joyce says that up to 5 percent of the company’s competition could come from customers deciding to insource the parts and services  they historically relied on from Norican Group. This typically happens during slow economic periods. “As customers start losing volume, they tend to start pulling more and more operations in-house,” Joyce says.

Nevertheless, Norican Group is more than equipped to take on the competition no matter what form it comes in, Joyce continues. Not only does the company have the technology portfolio, it has taken steps in recent years to improve its supply chain model to help guarantee that its customers receive the right support, at the right time and in the right language.

Joyce says the company’s most significant advantage is its highly qualified product specialists. “First and foremost is the breadth of our technology portfolio, and our expertise in applying it,” he says. “In our industry it’s all about successfully applying the technology; it is not about the sale of a piece of equipment, per se, but the solution for increasing our customers’ profitability.”

The company’s technology portfolio includes the most extensive portfolio of shotblast machines in the industry as well as the world’s premier vertical molding technology. With the molding expertise DISA brought to the merger, Norican Group has the capability for providing its customers with the ability to produce the highest-quality castings in the industry, according to the company.

Supporting technology once it is installed at customers’ facilities can be one of the biggest concerns customers have when they purchase equipment from a manufacturer. Joyce says Norican Group further distinguishes itself from its competitors by offering global technical expertise coupled with local service, something few other competitors can offer.

The company has expanded its local service capabilities in recent years, and it has developed a unique model that creates a more consistent and responsive support system for customers. Joyce explains that the majority of Norican Group’s competitors have a technology center focus, where equipment is built, shipped and serviced from the same locations. “Our model is different in that regard, and this is a key differentiator,” he says.

Norican Group has physically separated its supply chain from its technology centers, Joyce explains, keeping its fabrication and assembly shops in different facilities from its innovation centers. For example, the majority of the company’s North American technology sales originate from Canada and the United States, while manufacturing and sourcing is increasingly done in Mexico.

Likewise, in Europe, the company’s technology sales primarily originate from Denmark, France, Germany and Switzerland, while much of Norican Group’s supply chain elements have been  moved to the Czech Republic.

“By doing this, we are putting our internal emphasis on technology innovation, while deliberately lowering the fixed cost of our business,” Joyce says.

Along with the impact the move has had on the company’s cost structure, Joyce says the separation has been beneficial for Norican Group and its customers. The customers are now guaranteed an unending stream of leading-edge technical innovation. The company can now maintain a level production load at each centralized fabrication center due to the elimination of the difficult-to-manage production peaks and valleys associated with smaller sites.

Joyce says the move was largely driven by the company’s customer base, because this is how many of them tend to operate, as well.

Developments such as this have made it easier for Norican Group to keep up with many of the most substantial changes in the industry over the last few years.

For example, even though the Norican Group has an impressive global footprint, keeping up with the global growth of its customers hasn’t been easy. “By far our largest challenge is the increasing globalization of our customer base,” Joyce says.

In the past decade, the entire industry has changed thanks to the emergence of the middle class in countries such as China and India. Joyce says Norican Group serves between 12 and 15 major industries, and as of now nearly all of those have started gearing toward China.

Nearly 25 percent of the company’s revenues today come from China and India, a number it expects to grow to 40 percent in 10 years.

In the face of these monumental changes, Joyce says Norican Group has been following its customers overseas and making improvements to enhance its speed. He says the separation of the company’s supply chain and technology centers has improved the speed with which it serves customers, but the company is committed to making further improvements to reinforce its local service.

“What you’re going to see is us reinforcing our strengths and providing superior service to our customers globally,” Joyce says.

Joyce says the challenges Norican Group faces are unique because of the company’s status as a “relatively small global player” that has the same needs of other global companies but fewer resources to meet those needs. However, Joyce says the company is well-equipped for those challenges because of the legacies of the two companies that comprise it.

Joyce says Norican Group made a concerted effort during the merger to emphasize the established values of DISA and Wheelabrator. Those values are managing for sustainability, respecting diversity and building teamwork, developing employee potential and delivering on its commitment to all stakeholders.

Joyce explains that those four values were the common elements that helped both DISA and Wheelabrator survive the economic downturn in 2008-2009, and have set the tone for how Norican Group operates today.

With those values in place, he believes, Norican Group expects to continue building on its long tradition of success well into the future.