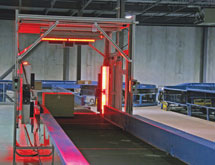 Norpak Handling Ltd. may be celebrating its 25th anniversary this year, but the knowledge and expertise of its senior management extends well beyond the quarter-century mark. In fact, it is this experience and dedication to service that has made the conveyor system distributor a success throughout Canada.

“We are primarily a supplier of other people’s products,” President Stewart Raynor says. “Our strength is the applications knowledge we have of various industries and the types of conveyors we can offer to improve our customers’ operations.”

Norpak Handling is a North American leader in the design and integration of material-handling systems. Founded in 1988, Norpak quickly established a reputation for its customer service and value-engineering. It offers turnkey installations designed, built and commissioned on time to clients’ technical specifications.

Raynor founded Norpak after having served since 1984 as general manager of Mathews Australia, a conveyor company that was set up as a joint venture between Canadian manufacturer Mathews Conveyor and a distributor in Australia. When Raynor returned to Canada in 1987, Mathews was going through a major reorganization and he found he needed a job.

He founded Norpak Handling as a distributor of unit-handling conveyors for clients throughout Canada. The company caters to automotive, postal/courier, warehousing, distribution, food and beverage, and manufacturing clients.

Norpak’s primary geographic market is Canada, which it serves through offices in Montreal; Port Hope, Ontario; and Vancouver, but it also serves a growing list of international clients. The company recently completed a major project for a customer in the middle of the Gobi Desert in Mongolia. The company also has equipment in Australia, the United States, Europe, Chile, Japan, the United Arab Emirates, the Cayman Islands and Bermuda.

In January 2010, the Northumberland Group – which owns Norpak – purchased McKessock Engineering, which was subsequently renamed McKessock Conveyor Solutions Ltd. Founded 33 years ago, the company serves clients in the Greater Toronto Area and western Ontario, as well as customers throughout Canada.

Raynor says McKessock served a niche market with standardized products, which complements Norpak Handling’s capabilities with custom systems. The acquisition has added significantly to annual sales, according to Raynor.

Before this acquisition, the company purchased the conveyor division of BC Conveying Machinery of Van­couver in 2000. This company added significant capabilities on the material-handling side of the conveyor industry as well as a large customer base in western Canada.

“During the 1990s our business doubled every year,” Raynor says. “Following the purchase of our Vancouver operation, we also opened an office in Montreal again creating growth opportunities.

“A large part of our success – whether in acquisitions or organic growth – is that we stay with what we know,” Raynor adds. “I can see future growth in Canada with perhaps another acquisition, this time in the United States, but we will always stay in the material handling field where we can best exploit our core strengths.”

Norpak Handling recently installed a specialized conveying system for one of the world’s largest wine and spirits distributors located in Ontario. Raynor says the requirements of this project were unique.

It accumulates, sizes and sorts a variety of different size products and has the capability to palletize a mix of dissimilar size cases on to common pallets. The pallets are then shipped to stores located throughout the province. The system was installed as a prototype lane.

Over time, further lanes will be added to allow all of the customer’s 75,000 cases per day to be handled.

“A large proportion of our customer’s daily shipments are made up of less than full pallets of products. If an individual store wants five cases of gin, twenty of scotch and a selection of various wines, then that is what the distribution center sends them,” Raynor says. “Prior to this installation, all of these individual cases were manually palletized. The prototype lane offers significant productivity improvements for our customer. It also reduces product breakage. On top of that, our simulations indicate the total number of pallets shipped should drop by about 5 percent.”

Norpak worked with the customer on the development of the system over the last four years. “Improve­ments to the store order lane area has always been our customer’s goal,” Raynor notes. “In late 2008, they hired Norpak along with a software development company to work with their own people in developing concepts for the prototype lane.

“That was followed a year later by another contract to finalize the system design and layout of the conveyors,” Raynor adds. “In late 2011, we became the successful bidder for the supply and installation of the mechanical system. The conveyors were installed by the end of April with testing and commissioning undertaken throughout the summer.

“A system such as this could not have taken place without the hard work of everyone on that initial team four years ago,” Raynor says. “Each of us brought our own strengths to the table. Our customer provided the vision and their experience as conveyor operators. For Norpak, obviously, it was our knowledge of what conveyors can and can not do. The software company had to develop the algorithm to make up a stable pallet load from variations in case platform and height to where voids would be formed in any individual layer of a pallet. The whole process was simulated and tested within the customer’s facility long before metal was cut and formed.”