Back to Profile Gallery > Notations 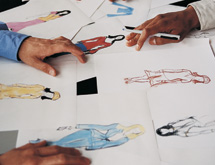 Being successful in the world of fashion means a manufacturer needs to have one foot in the future and one in the past. Not only does it need to stay on the cutting-edge of trends, but it needs to have the experience to be effective, and these are two characteristics Pennsylvania-based Notations has an abundance of. President and CEO Kurt Erman says the company is well-seasoned in the ins and outs of manufacturing as well as the ever-changing preferences of customers.

“That’s really where and how Notations became what we are today,” Erman says.

Erman has more than four decades of experience in the clothing industry, having started out in the junior market with a manufacturer called Stitches before starting his own company with a partner in 1979 called Notches. Erman says his experience in the junior and misses market helped him stay on top of the latest trends and build Notches into what is now known as Notations.

Notations specializes in creating clothing for women that appeals to fashion-forward shoppers at moderate prices, Erman explains. Its products are found in nearly all major stores, including most recently Walmart. Because most manufacturers choose either the high-end or value ends of the market, Erman says Notations has found a successful niche in the mid-priced arena. The company enjoys annual revenues of more than $225 million.

As Notations continues to maintain its leadership position in the moderate-priced women’s sportswear industry, Erman says the company’s global manufacturing profile will be one of the most important keys to its success.

Notations works with factories around the world, including facilities in Mexico, China, India and Indonesia. However, Erman says the company also maintains close ties to manufacturing partners in the United States, something that is increasingly rare in the apparel industry. The company has relationships with factories that date back 20 years, according to Erman.

“We are one of the very few in a moderate zone that is still manufacturing successfully in the United States, which is a very important thing,” Erman says, adding that many manufacturers simply don’t have the resources to continue operating in the United States. “In today’s market, it’s very tough to make goods here.”

Nevertheless, Notations’ size and expertise give it the ability to keep some of its manufacturing operations in the United States, which gives the company an advantage when it comes to getting products onto store shelves quickly. Erman says the company’s ability to manufacture high-quality clothing at affordable prices gives it another significant advantage in the marketplace.

“The most important thing is giving the customer a tremendous value,” he says, adding that for customers like Macy’s, moderate-priced garments of high quality are extremely valuable for attracting customers. “We can manufacture fashion at a price point where most people can’t.”

A major part of the reason Notations can do this is because of its close relationships with manufacturers overseas as well as in the United States. Erman says the continuity of those relationships has been essential for Notations to ensure that its products continue to be of the highest quality.

“The manufacturing overseas is very, very important to us because of our relationships for 20 years with the same people,” Erman explains. “We stick with the people who have been very helpful to us.”

Erman says the other side of Notations’ success is its ability to stay close to the trends. The company has its own pattern department at its corporate headquarters where 14 full-time patternmakers work on developing samples. These sewing facilities are located within the company’s 120,000-square-foot distribution center, and Erman says Notations also has a major showroom in New York City where its salespeople show off new designs to buyers from major chains.

The company also sends its employees out regularly to find out what trends will be arriving from overseas, Erman says. Armed with these new ideas, Notations’ designers can design new fashions that will meet the ever-changing desires of the marketplace.

“We shop the European market, we bring back ideas and any new trends that are out there we put on our line immediately and get our buyers out there,” Erman says.

Notations’ unique blend of advantages have led to a number of successful partnerships with celebrities who have chosen the company to develop licensed clothing lines. Erman says the company started its licensing division about 10 years ago with clothing created by musician Gwen Stefani, and since then it has developed into a major component of the company’s operations.

Erman says Notations has a lot to look forward to, including the addition of Internet sales to its corporate website, which is coming in the near future. No matter where the company ends up in the next few years, Erman says it will get there the same way it has gotten where it is today. The company’s focus has been and will continue to be on the best fashions.

“We don’t want to change any of that because that’s our formula,” Erman says.