Back to Profile Gallery > Note UK

By constantly improving processes and streamlining sourcing channels and solutions, Note has become the obvious choice for those seeking a quality-conscious and flexible manufacturing and logistics partner.

A near sourcing centre providing end-to-end customer solutions for the entire value chain, Note specialises in prototyping and low-to-midsize volume PCBA services. Operating from a modern and well-equipped 11,000 square foot factory, the company is able to support customers in new product development, DFM and test, PCBA and box build services as well as rapid prototyping. Note UK also offers customers direct and indirect aftersales servicing for products in the field. 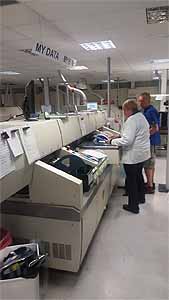 Discussing the company’s developments over the years is Neville Whitham, Managing Director of Note: “We are part of a Swedish group, Note AB, which is based in Kista on the south side of Stockholm. Note AB has had a sales presence within the UK since 2006, with no manufacturing presence. However, in 2008 Note AB acquired us, a company that was based in Tetbury which was going into receivership and at the start of October 2008 we moved into our current site in Stonehouse.

“All Note AB did really was acquire a company that had all machines and staff and relocate it to another location. From then on, we were left to run independently, with only some direct involvement from Sweden until 2011 when a part time MD, based in Sweden, would come out to our site every other week due to changes in Management in the UK. It was later decided that we needed an operations manager/ production manager in-house to strengthen operations. Grant Bennett came in as Managing Director and I came in as Engineering and Quality Assurance Manager, and when Grant left I was selected for the role. In the last two years, we have really started to drive the business forward through investment and the addition of a new business development manager who is getting us new business. Through these changes we are seeing positive growth following a few challenging years and are starting to look to at least double turnover over the next five years.”

The drive to approach the business in a new and improved way was spurred on by an audit from a major customer, which saw a number of weak points in the company. In response to this, the company employed a full time Managing Director and Engineering Manager, which resulted in a lot more control over the company’s operations and a more team orientated environment. “We were previously very independent, with some people and departments working independently, with very little guidance in achieving the same goal and ensuring every aspect of the business was done in a certain way. Grant brought a very stable structure to the way we work within the UK factory and he pushed the group to develop from the top down. He worked with head office to ensure that we could receive the suitable support that we needed to grow,” says Neville.

“The group also obtained a new CEO around that time as I took the role; the new CEO has a different view on how the group should run, with a positive and pragmatic view and a solid understanding of the financial and manufacturing side of the business. My goal is for the entire group to grow by at least ten per cent over the coming years,” he adds.

Although this change of direction for Note UK is relatively recent, the company is also seeing an uplift in business, with eight new customers added since May 2016. While this increase in demand is positive, the company has faced new challenges caused by a boom in the electronic manufacture market, which has caused a lack of availability of components. “In terms of 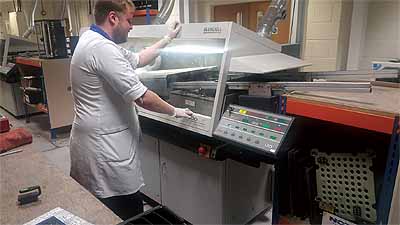 components, demand is outstripping supply a little bit. In a recent press release, NOTE AB Central Sourcing stated; ‘We are seeing an increase in lead-times, the worst market conditions since 2009/2010 and in fact will probably, ultimately, be far worse than that situation.’ With this information, our customers are now responding by securing stock and starting to see long orders out to the end of 2018. As someone with 21 years of experience in electronic manufacturing, this is something I have never seen before with orders. You would previously be lucky with six month orders but at the moment we have orders going out for a year following a request from us to customers asking them for orders in advance to ensure stock is secured. Customers have reacted well to this and our order book has increased considerably.”

Viewed as a high-mix, low-volume company, Note UK benefits from the financial strength and larger facilities within its parent company and can thus pass on larger volume orders to its industrial plants in China and Estonia. “If it’s a smaller batch, say 500, and it ramps up over the next two years or however long, we will start it off in the production batch in the UK and will get the development side and engineering side done and will then work with the customer when quantity increases to perhaps dual source the project to other sites,” explains Neville. “We currently have a large project ongoing at the moment, but that’s all I can tell you. Our focus in the short-term is to increase capacity and capabilities, further invest in machinery and try to source experienced employees. We want to become leaner in the future through lean processes and ensure parity with the rest of the group, where possible,” Neville concludes.